Munich? Beer? Yeah, they have plenty of it. There’s a lot of options no doubt. If you have a palette for beer no matter if it’s the same type of beer, you’ll want to ensure that you are drinking the best of the best while you are there. These are the best breweries in Munich to help you prioritize your trip.

I’m a beer fan. Yeah, I said it. What better place to go than Munich? I’ve likely developed a massive interest in beer from living in Minneapolis.

In particular, I love European beers and more importantly German-style beer. I love Altbiers, Kolsch and Helles. They are crisp and crushable. During my last trip to Munich, we hit as many breweries as we possibly could.

SECRET TIP: beer styles vary across different regions of Germany, and you likely will not find one region’s style in another. For example, in Dusseldorf you will experience altbier, but Cologne is known for their Kolsch. Bavarian beer is a lot different than what you’d see in Dusseldorf, Berlin, Cologne, etc. It’s a different culture and style.

In Munich and Bavaria, the following beers are the most popular that you will find at the beer halls and breweries:

Generally speaking, in Germany, the beer is good but the halls make it even better. And outdoor beer halls or beer gardens make drinking beer an outdoor activity.

It translates into good conversation and fun memories (from what you can gather out of your night). It’s obviously one of the amazing things to do in Munich.

Let’s get into the top breweries that you need to try in Munich.

Schneider Brauhaus is one of the oldest breweries in Munich, so it was our first spot to stop.

Located in the heart of it all, the brewery was huge and had a lot of old art.  Schneider is a bit more well-known for its Weiss (White) beer.

Beyond the Weiss beer, everything else was pretty good.

Schneider didn’t totally blow me away. It’s a good stopover spot on your way to Hofbrauhaus to check out.

Löwenbräu means Lion Brew. Lowenbrau doesn’t have a much-documented history as the other iconic breweries that you are familiar with. You’ll want to try the URTYP pils beer.

The best way to visit this brewery and beer hall is by visiting Löwenbräukeller, which a historic restaurant, beer cellar, and event venue.

The beer at Hacker-Pschorr that I like the most is called the Munich Gold lager.  It is crisp, golden, and flavorful. If you have extra time such as 3 days in Munich, you should definitely venture to the brauhaus.

An organic brew house in Munich owned by a family, the beers here are made from local ingredients that are sure to satisfy! The brewery often holds events where they tell you about the beer and background of the brewery while you try beer samples.

The staff here is what really blew us away. The staff is friendly and answered all our questions. The beer was also great, something you can’t get in many places. 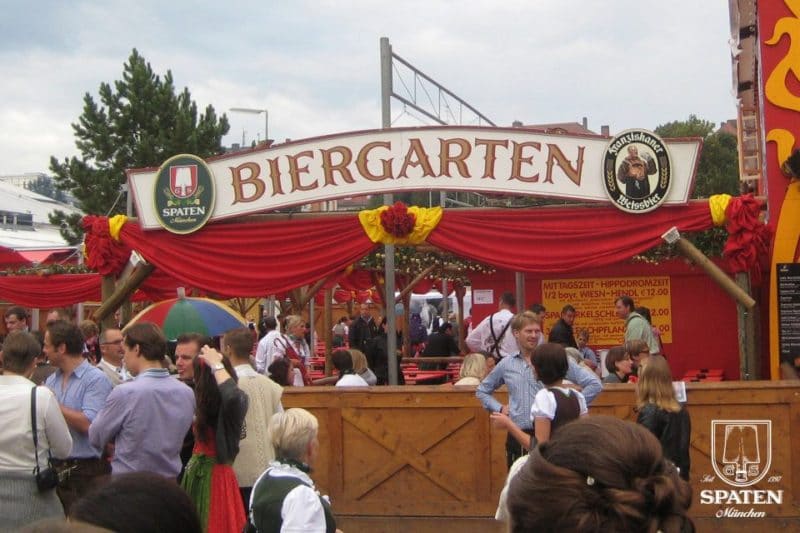 If you love Helles, Spaten is the original for it. At the peak of the brewing industry in Munich, Spaten was the largest brewery in the greater Munich area.

After the war, Spaten was never able to make a full come back. Fast forward today, Spaten is definitely prevalent in the beer scene.

I’m sure you’ve heard of Franziskaner. They are owned together and the Franziskaner Weißebier is another great choice in addition to the Helles. Visit their traditional German dining at the Spatenhaus an der Opera.

Hofbrauhaus? You’ve probably never heard of it, right? Jokes aside, it continues to be a tourist attraction because of the outstanding environment and experience. The Helles is pretty good too.

Hofbrauhaus is a state-owned brewery. It was founded in 1589 by the Duke of Bavaria, Wilhelm V.

It is one of the oldest beer halls in Munich and was founded as the brewery to the old Royal Residence, which was just around the corner from where the beer hall stands today.

The beer became extraordinarily popular once the Bavarian Beer Purity Law was enacted in 1516 that stated only natural ingredients could be used in the brewing process.

It’s become a worldwide phenomenon as a place to gather, enjoy beer and a good time.  The Hofbräuhaus beer hall is a must-see in the city center near Marienplatz. It’s a historic part of Hitler’s Third Reich tour. 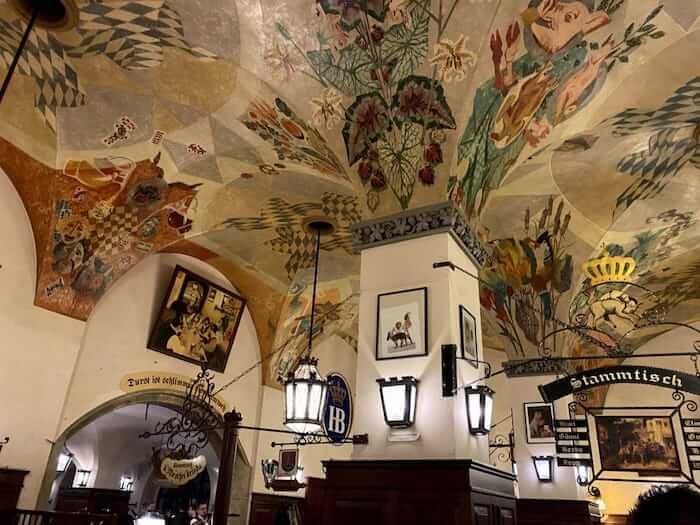 There’s actually Hofbrauhaus locations around the world today, in locations such as Melbourne, Bremen, Las Vegas, Chicago, Cleveland and many others.

If it’s a nice day outside, be sure to visit the Chinese Garden at the English Gardens in Munich. They serve plenty of Hofbrau and it’s a great atmosphere to enjoy the sun and outstanding beer. 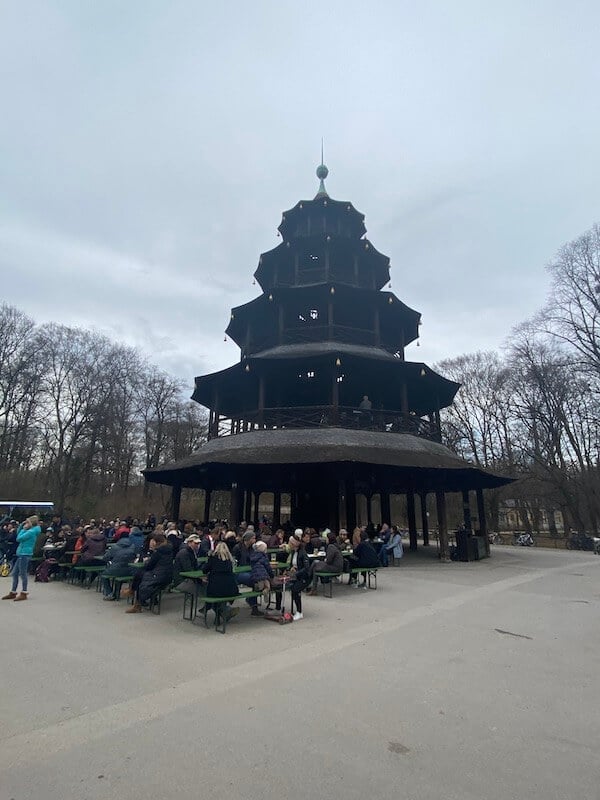 You can’t go wrong with that view and sunset at the Chinese Garden.

Paulaner is one of the best in the business in Munich beer. It tastes amazing too. It’s definitely worth a trip outside of the city center to see this beer hall.

It has a more refreshed touch with a bit more modern interior.

I love the traditional copper. The beer tanks feed directly into the taps they are pouring. Who else loves a fresh pour of beer as much as me? 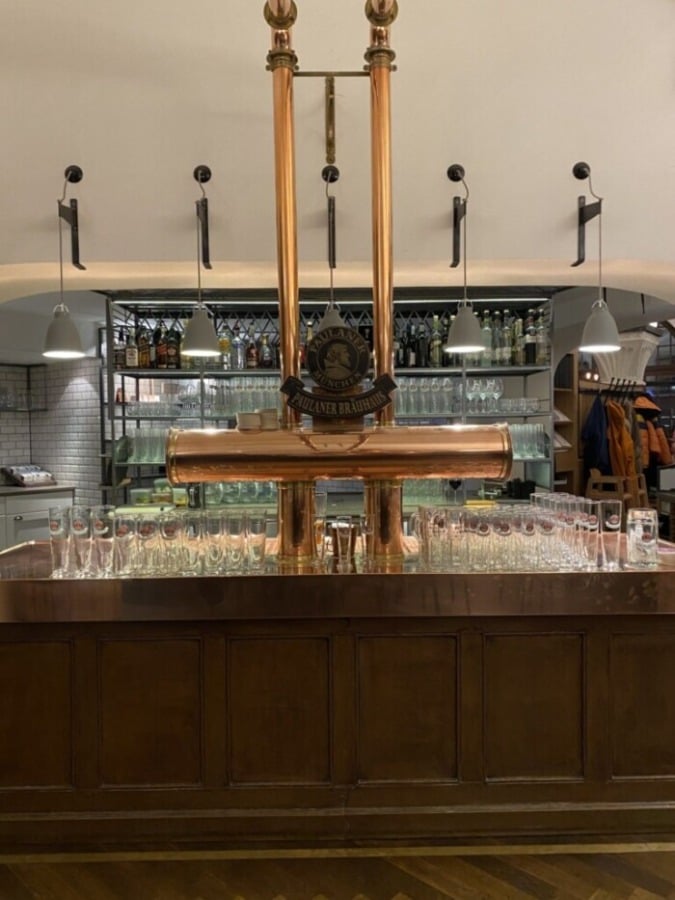 The food at Paulaner is amazing too – we had an awesome dumpling soup and our friends had a meat platter with pork and duck.

Both were fantastic and paired well with the beer.

See Related: Best Vacations for a Group of Friends

I absolutely love Augustiner. There are a couple of locations to choose from, but any location will exceed your expectations.

Augstiner Stammhaus has an outdoor patio and game area that is really fun when the sun in shining. It’s one of the breweries in Munich that you really can’t get anywhere else. They also serve amazing food!

You can get Hofbrau and Paulaner in a number of locations (it never tastes the same as in Munich), but Augustiner cannot be found outside of Munich.

If you know where to get it, please let me know.

Check out these epic day trips from Munich to find other Bavarian breweries not around the city center.

Conclusion on the Best Breweries in Munich

You really can’t go wrong with the various breweries in Munich. All of them provide their own unique flavor and perspective on good company and good fare. Munich has a ton of culture and good fun associated with it.

You’ll have a great time. Mix in a few breweries along with some historical spots. Bavaria is a gem. Enjoy.