Germany boasts a long and eventful history, with its impact rippling throughout the world. But while most people celebrate Deutschland for its culture, castles, and beer, they often overlook one thing: German dogs.

When most people think of German dogs, they blank out after “German Shepherds.” But what you probably don’t know is the fact that many beloved modern-day dog breeds, such as Great Danes and Pomeranians, actually originate from Germany.

In fact, there are over 50 dog breeds that emerged from Germany. With strong physical and behavioral characteristics, it’s no wonder why dog lovers take such a liking towards German dogs.

Let’s take a look at these most sought-after dog breeds from Germany:

These German dogs are also fondly referred to as “wiener dogs” because of their striking resemblance to sausages. 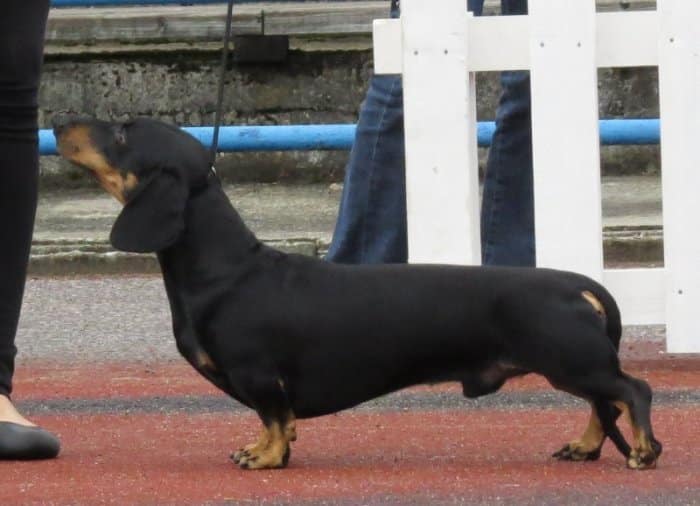 Dachshunds are incredibly playful yet equally stubborn. These free-spirited hounds are extremely affectionate towards and borderline possessive of their family.

Unfortunately, this also means that Dachshunds don’t take kindly to strangers, often exhibiting aggression towards humans and dogs outside of the pack.

The modern Dachshund comes in three sizes: standard, miniature, and “kaninchen” (or rabbit-sized). Of course, the standard size is most common among family pets.

A fully-grown standard Dachshund typically weighs between 16lbs to 32 lbs. Meanwhile, their miniature counterparts average at around 12 lbs, while the smallest kaninchen weighs a measly 8lbs.

Dachshunds are extremely affectionate and loyal towards their owners. If trained correctly, Dachshunds are remarkable hunting dogs with an affinity for chasing small animals.

But that’s just the thing; despite their potential, these German dogs are extremely difficult to train, owing to their headstrong nature. Moreover, housebreaking and potty training your Dachshund puppy can be quite a riot.

Dachshunds enjoy a long lifespan of 12 to 14 years. However, they are prone to painful spinal problems because of their unnaturally long spine. About 20-25% of Dachshunds will develop Intervertebral Disk Disease.

Dachshunds rank number 13 in popularity according to the 2016 AKC registration statistics. 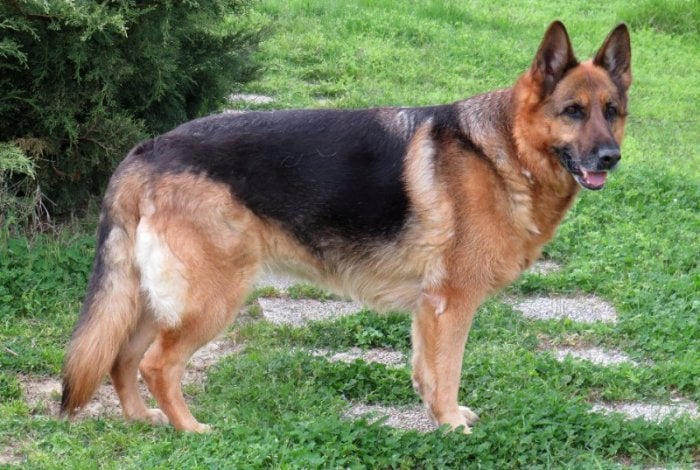 German shepherds are extremely obedient, willing to please, intelligent, curious, and protective. By nature, German Shepherds desperately need a purpose or a task to fulfill.

German Shepherds are categorized as medium-to-large-sized dogs, with both males and females growing up to 24 inches in height.

When it comes to weight, the AKC has no standard weight range. However, you can expect fully-grown males to weigh between 66lbs to 88lbs, while females max out at 70lbs.

It’s difficult to find fault with these highly dutiful and loyal canines. With that said, these German dogs do suffer from a range of spinal ailments because of how disproportionate their hind legs and spine are.

A healthy German Shepherd can live up to 14 years. Sadly, these canines are prone to bone-related diseases and typically die from cancer of the spleen and bone cancer.

According to the 2016 AKC census, German Shepherds are the second most popular dog breed in the US.

German Wirehaired Pointers are lesser-known than their Shorthaired counterparts. However, this German pointer dog has its own virtues. 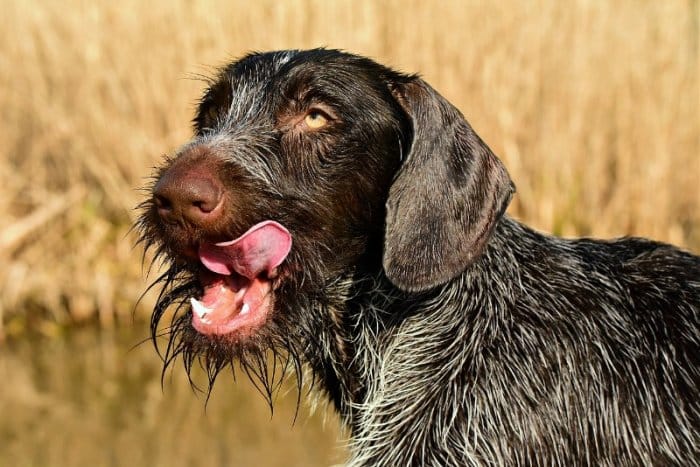 GWPs are very affectionate and loyal to their pack but aloof towards strangers. They thrive on human companionship and are the happiest when they are active members of the household, whether it’s by lounging around with you or doing everyday chores.

As passionate German hunting dogs, GWPs are extremely eager to learn and equally eager to please. However, they are infamously willful, bold, and free-spirited.

German Wirehaired Pointers are medium-sized dogs with a strong, muscular build. Adult male GWPs can grow up to 24 to 26 inches, while females grow to a minimum of 22 inches.

Moreover, you can expect your fully-grown German Wirehaired Pointer to weigh anything between 50 to 70lbs.

Beyond their literal brawn resulting from a naturally high muscle mass, these German dogs boast a number of strengths; they are good sniffers, hunters, and chasers. Moreover, their thick, coiled fur hardly gets tangled or dirty, nor does it shed excessively.

That being said, you do have to brush them regularly using an aggressive undercoat rake. Otherwise, they can overheat, especially in the summers.

German Wirehaired Pointers can live for up to 14 to 16 years, sometimes even longer.

GWPs are highly popular in Germany, where they have a different name: Drahthaar. In America, GWPs are only moderately popular.

The aptly named Great Danes are nothing short of spectacular in their appearance and behavior. 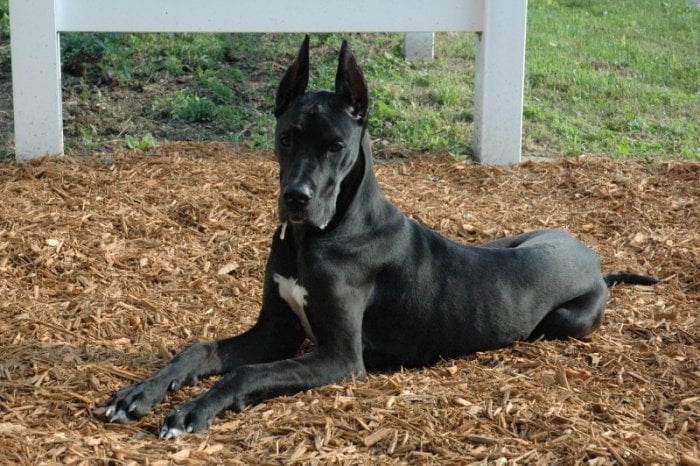 Often referred to as gentle giants, these German dogs often seek physical affection from their owners.

Moreover, these large and imposing canines are friendly towards strangers, other dogs, and even non-canine animals. Their low prey drive is surprising considering the fact that Great Danes were originally hunting dogs.

Great Danes are notorious for their giant size. According to AKC standards, a fully grown Great Dane should not be less than 30 inches at the shoulder level. However, most Great Danes typically stand upwards of 35 inches.

When it comes to weight, Great Danes are one of the heaviest dog breeds. At the minimum, an adult Great Dane will not be less than 100lbs.

Great Danes’ friendly and easy-going nature contrasts their large and imposing size. Moreover, they are extremely low-maintenance in regard to grooming.

However, untrained and unsocialized Great Danes can be a huge menace to you, your family, and strangers. Moreover, they do not fare well in cooped-up apartment spaces.

The average lifespan of Great Danes is 6 to 8 years, but some healthy dogs can live for up to a decade.

Great Danes have been decreasing in popularity over the years. Still, they hold a high ranking as the 16th most popular dog breeds among American households.

You probably didn’t know that these American-popularized dogs actually originated from Germany. 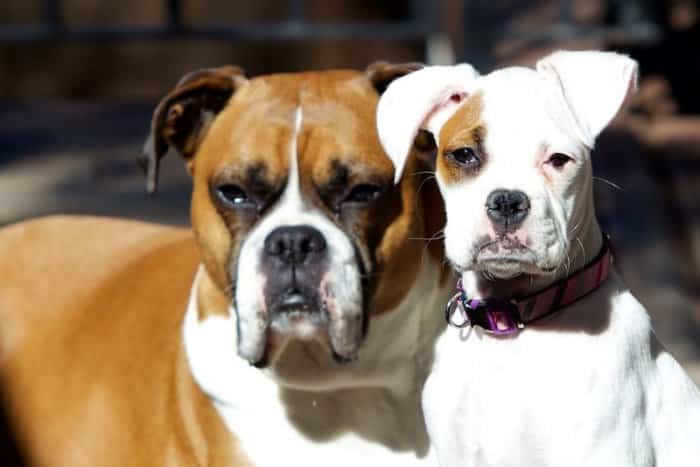 Despite their fearsome appearance, Boxers are gentle, calm, and level-headed. Over the years, they have unfairly been labeled as aggressive and unpredictable dogs, but that’s simply not true.

Instead, their solemn façade belies their energetic and playful nature. Moreover, Boxers are instinctive guardians and will quite literally never leave your side.

As medium-sized German dogs, Boxers can grow up to 23 inches and weigh up to 66lbs. Moreover, they have a high muscle mass and thrive on daily physical exercise.

Boxers are intelligent, easily trainable, and amicable dogs. They adapt well to different environments and respond kindly to new faces.

However, they require copious amounts of exercise to offset their high nutritional needs. Moreover, they tend to be overly exuberant and express their vigor through digging and drooling.

The lifespan of a healthy Boxer ranges from 9 to 15 years.

Boxers hold a steady place as the seventh most popular dog breed among American households. 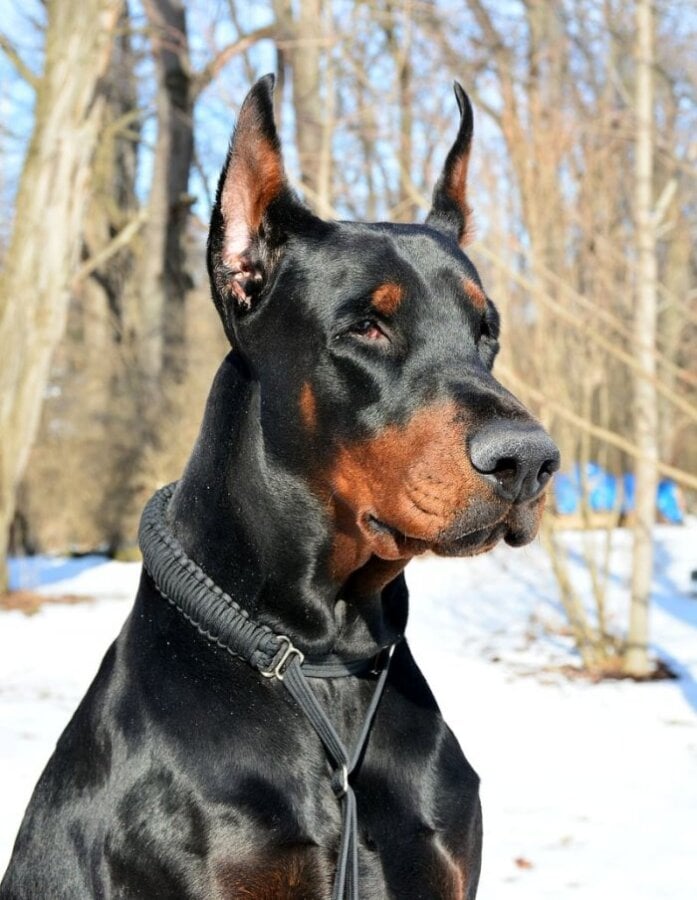 Doberman Pinscher dogs are some of the most intelligent as well as beautiful modern canine breeds.

Dobermans have a notoriously unique mind among canines, with a variety of research dedicated to their behavior alone.

Generally speaking, these German dogs are fiercely loyal and vigilant. At the same time, they rank high in playfulness and love to be goofy around their family. When it comes to strangers, though, Dobermans prefer not to socialize and instead keep to themselves.

Dobermans are medium to large-sized dogs, confidently standing at an average of 27 inches. However, their strong, muscular build endows them with a heavy weight between 88lbs to 99lbs.

The Doberman Pinscher is among the most intelligent dog breeds, according to expert evaluations. For this reason, they are quite easy to train, housebreak, and socialize.

An unfortunate stereotype about Dobermanns is that they are aggressive, but this is simply not true. As long as they have a healthy environment, Dobies can be as gentle and loving as Labradors.

The Dobermann’s lifespan is about 10-14 years, with heart-related diseases being the leading cause of death among the breed.

Despite being a relatively new breed, Dobermanns are the 16th most popular dog breed among dog owners.

It’s easy to confuse a German Spitz with its more popular cousin: the Pomeranian. However, the German Spitz has a personality of its own. 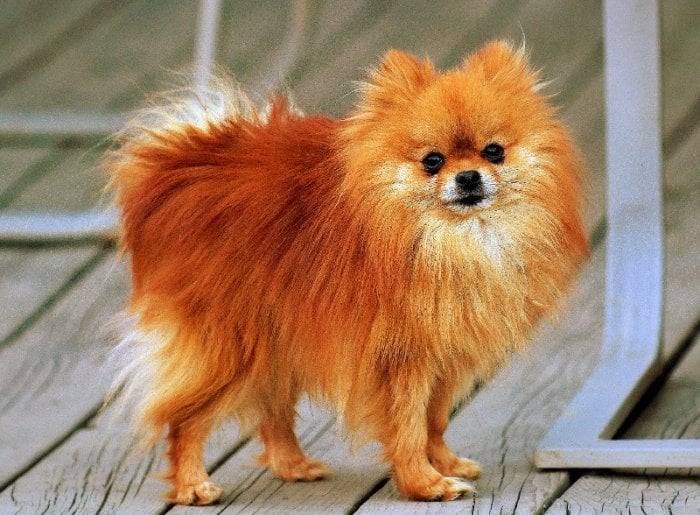 The German Spitz dog is notoriously attentive, lively, and highly devoted to their pack.

Of course, it’s a different story altogether when it comes to strangers. For this reason, they make for ideal watchdogs for your home.

However, you need to establish boundaries with them from an early age. For example, you can give them their own crate, so they don’t end up claiming the entire house to themselves.

Notorious for its thick, bushy coat and mane-like collar, the German Spitz looks bigger than it actually is. Adult German Spitz dogs max out at 12 to 15 inches and weigh 24 to 26lbs.

German Spitz dogs are easily trainable and always willing to please. Additionally, they have moderate energy levels and, for the most part, are happy just lounging around with you.

Keep in mind that these are highly vocal dogs and will bark incessantly without any provocation.

The German Spitz has a relatively high life expectancy of around 13 to 15 years.

German Spitz dogs are more popular in Germany than in any other part of the world. However, the Pomeranian variation is quite popular in North America. 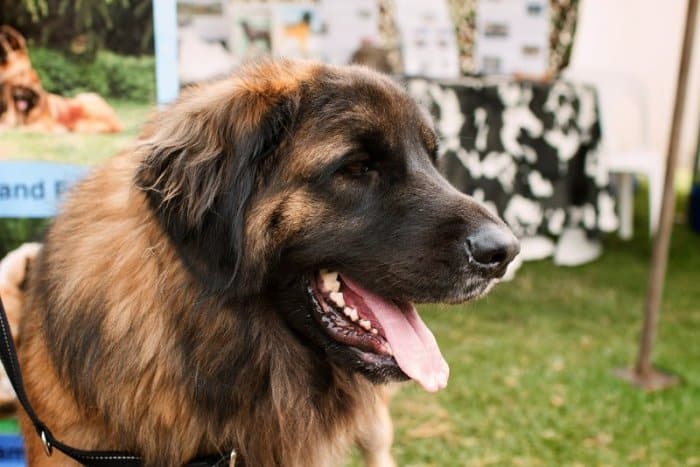 Leonbergers are first and foremost family dogs. They are naturally submissive to their family, be it adults or small children. Moreover, they are self-assured, self-disciplined, unresponsive to noise, and well-behaved around strangers.

Leonbergers are super low-maintenance owing to their calm and collected demeanor. Not only are they well-behaved around the house, they are anything but fussy when it comes to traveling.

But while they won’t knowingly give you much trouble, Leonbergers are prone to myriads of health complications.

Leonbergers have a lifespan of around seven years, which is four years less than that of the average purebred dog. 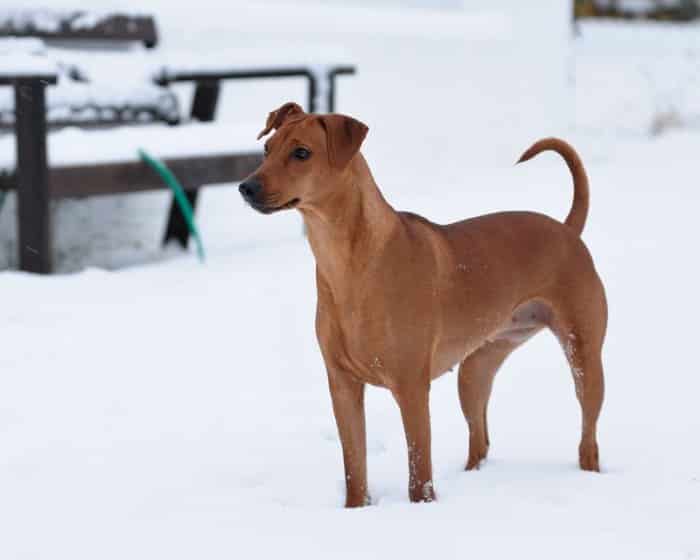 German Pinschers are dogs like German shepherd, both in terms of physical appearance and behavior. However, they have a shorter coat and large, conical ears.

Around the house, German Pinschers are surprisingly calm and composed. They are remarkably docile and will never pick a fight with you.

Sometimes, though, they like to show their goofy side and love to play around. In fact, their favorite pastime activity is a drawn-out game of fetch. Considering their high energy levels, you’d be better off getting them an automatic interactive ball launcher.

German Pinschers are medium-sized dogs, typically reaching a height of 20 inches and a weight between 25 to 35lbs.

Loyal, watchful, and fearless, the German Pinscher is a hard worker, fierce protector, and loyal companion.

They have a high prey drive and are naturally antisocial, but early socialization works wonders.

German Pinschers can live up to 12 to 14 years. Unfortunately, their small gene pool makes them vulnerable to a range of ailments.