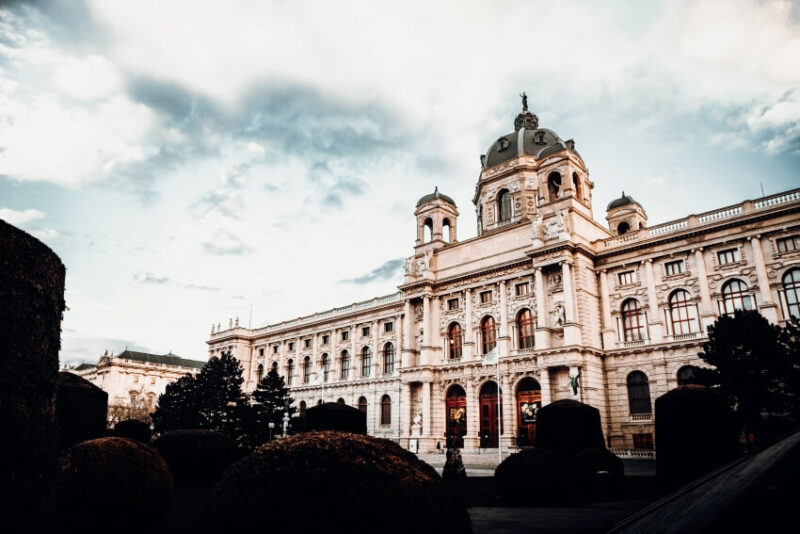 Vienna is easily one of the most beautiful cities on Earth with many interesting sights to see both indoors and out.

While walking around and exploring the grounds of the Austrian capital, you might feel as though you are on the set of a period drama, surrounded by magnificent historical architecture.

Vienna has much more going on than these glorious old buildings though. It’s brimming with adventure, rich history, outstanding cuisine, vibrant culture, and an incredible art scene!

Vienna is the home that has molded and raised brilliant minds including Beethoven, Mozart and the founding father of psychoanalysis, Sigmund Freud.

The city boasts outstanding museums that showcase her ancient history,  as well as her plethora of artwork treasures.

Among the best art museums to explore in Vienna is the Kunsthistorisches Museum. It is a great museum that will dazzle your eyes with the beauty of many artworks and engage your brain with Austrian history.

The Kunsthistorisches Museum in Vienna is one of the world’s largest museum of fine arts and is known as Vienna’s answer to The Louvre.

The collections include art from antiquity to the post-modern era, paintings by Rubens, Rembrandt, Vermeer, Delacroix, Renoir, Rodin, Monet, and Cezanne.

I give you a first-person tour of the museum and show you some of my favorite highlights from inside!

In 1871, Vienna opened up a new museum; the K.K. Österreichisches Museum für Kunst und Industrie, or “The Imperial Austrian Museum for Art and Industry”.

Unfortunately, the space the museum first occupied was too small for the plethora of artifacts and works in the collection, and much thought was given to coming up with a new space.

It was under the direction of Emperor Franz Joseph I of Austria-Hungary that the new palatial building for the Kunsthistorisches Museum was built at Maria-Theresian-Platz.

And WHAT a building.

In 1891, the Kunsthistorisches Museum opened its new doors. The building was damaged during World War II, and Nazis would loot some of the museum’s most priceless treasures, but the building was restored following the war.

One of my favorite features about this museum is that you can take great photographs outside!

The building itself is a gorgeous example of Baroque architecture and the surroundings are postcard perfect.

There are also some fantastic restaurants and cafes around the museum if you’re in need of refueling.

Visiting the Kunsthistorisches Museum in Vienna

The Kunsthistorisches Museum, or Art History Museum, houses a fascinating collection of art, and is widely regarded as one of the world’s most important galleries.

Also known as the KHM, the museum is housed in a colorful royal edifice on Ringstraße and topped with an octagonal dome, and is located in the heart of Vienna’s historic city center.

A visit to the museum is a ticket to an artist’s adventure where you can admire a sea of masterpieces, collected, compiled and loved for centuries.

Successive Habsburg monarchs, most notably Archduke Leopold William in the mid-17th century, gathered a vast collection of treasures, which led to the establishment of the Kunsthistorisches Museum in the late 19th Century – not just as a place for the Habsburg’s to store their loot, but also to share it with the people.

How to get to the Kunsthistorisches Museum

The KHM can be reached from the city center by bus, train, light rail, or a quick stroll.

It’s also a great jumping-off point for a day out in Vienna, as some of the city’s other major attractions are only a few minutes’ walk away.

It will take you around 5 to 10 minutes to get to the Kunsthistorisches Museum by foot from Stephansplatz.

When you are planning your visit, remember that the Kunsthistorisches Museum is closed on Mondays.

It is open Tuesday through Sunday with each day having opening hours of 9 am to 5 pm.

A significant collection of varied exhibits, including paintings, sculptures, coins, and countless decorative arts, can be viewed at the Kunsthistorisches Museum.

The museum’s collections are remarkably diverse, including the Egyptian and Near-Eastern Collection, the Collection of Greek and Roman Antiquities, the Picture Gallery, the Kunstkammer Wien, and the Coin Collection.

The interior of this museum has a spectacular design with marble walls and gold accents. It has a grand and very ornate look with many different statues and paintings adorning the halls.

Not to be missed are the stunning glass sphere chandeliers hanging from the ceiling in some spots!

See Related: Why Everyone is Obsessed With Travel?

The Kunsthistorische Museum Wien houses over 100,000 works of art that you can admire up close, but in addition to the expected oil paintings or sculptures, the museum exhibits tons of other artifacts.

This includes historical items like medieval armor, weapons, ancient tools, and antiques from across the ages.

A collection of Lebanese art and artifacts is on display in the Ephesos Museum and Collection of Sculptures, as well as the Imperial Armoury, the Collection of Historic Musical Instruments, and the Coin Collection.

Some of the KHM’s Exhibitions are also on display at the nearby Imperial Treasury, and Imperial Carriage Museum in Vienna, as well as the Ambras Castle in the beautiful city of Innsbruck.

When it comes to famous works of art, the KHM doesn’t disappoint.

You’ll find paintings from the Renaissance, including the world’s most outstanding collection of Bruegel paintings, as well as works from the Baroque schools from Italy, Germany, Spain, and others.

There are also the paintings of well-known artists such as Dürer, Titian, Velázquez, and a host of others that would turn this article into a who’s who of the art world. The museum is of course home to Benvenuto Cellini’s nearly 500-year-old Salieri.

Beyond the world-famous exhibits, the museum has more to offer in the form of guided public and private tours, art seminars, and a variety of educational programs to name but a few.

This incredible museum can also be booked for a variety of events, including weddings and receptions.

For hungry or thirsty visitors, there’s an on-site café and restaurant where you can have some time to grab a bite and unwind. You can also find plenty of super souvenirs at the museum shop and boutique.

The shop offers a brilliant selection of arts goods, as well as continuously updated new gifts and literature relevant to the collections and exhibitions on display.

The KHM’s boutique sells a variety of art-related items, including jewelry inspired by the museum’s collections, tiny replicas of sculptures, prints and postcards of some of the museum’s most famous works, and much more.

The museum’s extensive collections, distinctive characteristics, and overall aesthetic appeal distinguish it as one of the most beautiful museums of any sort in the world.

In the KHM, you can travel back in time, learn about artistic treasures, marvel at masterpieces, and bathe in the splendor of creativity. It is one of the most visually enthralling experiences you can have in Vienna.

The museum is also a great beginning to your journey through Vienna. You may continue your trip to see more of Vienna’s most popular attractions near by after learning about its incredible collection.

The Natural History Museum, and Maria Theresien Square are a couple of the closest tourist attractions to the KHM and well worth a visit.

If you’re headed to the metropolitan paradise of Vienna, don’t forget to visit the Kunsthistorische Museum. Your soul will thank you later!

See Related: Proven Ways to Save Money for Travel

Where is the Kunsthistorisches Museum?

The Kunsthistorisches Museum, often known as the Art History Museum of Vienna, is broken up into several galleries.

The museum’s most important galleries are located in the KHM at Maria-Theresian-Platz, which is in the center of Vienna.

Other galleries include the Hofburg Palace, Museum of Carriages and Department of Court Uniforms (in Schönbrunn Palace), Collections of Ambras Castle (in Innsbruck), the Austrian Theatre Museum (in Palais Lobkowitz).

The Hofburg Palace galleries are well worth a visit for the building alone. The Hofburg was home to emperors and presidents of the Habsburg monarchy and now houses over 800 years of Austrian history.

How many museums are in Vienna?

TONS. Simply put, Vienna is a global center of history and culture and is home to hundreds of fascinating museums.

Kunsthistorisches Museum, often known as the Art History Museum of Vienna, is the most popular museum in Vienna.

There are many other museums including The Museum of Fine Arts, The Leopold Museum, The Jewish Historical Museum, and ZOOM Children’s Museum.

Conveniently, most museums can be found near Museumsquartier in Vienna.

What is the Kunsthistorisches Museum’s address and phone number?

Where can I buy tickets for the Kunsthistorische Museum in Vienna?

You may buy your tickets online or at the Kunsthistorisches Museum in Vienna.