Before we get into our weisswurst recipe, let’s take some time to really understand what this recipe is and its cultural impact. Weisswurst, or white sausage, is a Bavaria specialty.

They are short and greyish-white-colored sausages made by mixing finely minced veal and back bacon in a food processor or meat grinder.

The mix of the white sausage is then stuffed into pork casings using a sausage stuffer. Seasonings typically used when making weisswurst include parsley, onions, nutmeg, cardamom, mace, ginger, and fresh lemon. They have a firm but bouncy bite and texture with a very mild taste.

The History of Weisswurst

Weisswurst was created in Munich by a butcher named Sepp Moser in 1857. He was working in the restaurant’s kitchen, Zumewigen Licht, located next to his butcher shop. Thick sausage skin was used to make the traditional sausages he always made. However, the guest of the restaurant didn’t want to wait a long time for their meal.

So, he used the thin skin he had to fill the remaining sausages, afraid that they would split. Instead of frying the sausages, he instead warmed them in a pot of salted warm water for ten minutes. The original recipe contained lean calf meat, bacon, herbs, and spices. He added some freshness with the addition of lemon and parsley.

How was Weisswurst invented?

Some myths claim that they appeared in 1857, following a restaurant owner who sold his for $8,000 and asked an apprentice to acquire the box. I believe this is what these people will use instead. Instead, they were heated with water. It’s been like that for quite some time.

However, after a picture was taken of its consumption in the late 1800s, it appears that the Weißwurst originated later. The typical May dish is likely to be spiced. There are many different spiced versions available. Over several years, Oktoberfest became a worldwide cult product in German cities.

Here is an easy-to-follow recipe when you want to make your own fresh weisswurst at home.

Directions: How to Make Weisswurst

Grind meat through a 1/4″ or 3/8″ grinder plate. Add all the ingredients except for the water and mix thoroughly until evenly distributed. Place the meat mixture in the food processor adding the water as you go. This will help emulsify the meat.

Pan-fry these brats until browned. For a delicate, crunchy coating, cover the sausages with milk for 10 minutes, then coat the sausages with flour. Brown the sausage in a skillet with vegetable oil. Serve with German bread or a crusty roll and spicy mustard, sweet mustard, or horseradish sauce. Enjoy!

Should I have a meat grinder to make Bavarian sausage?

While buying a meat grinder is not necessary, it may help you save some time and effort. If you have a kitchen knife, even if your cuts are uneven, the second stage of mixing will help ensure that everything is evenly distributed.

How to Eat Weisswurst

Weisswurst is often served warm. Since they are already precooked, you simply have to slowly reheat the white sausage in a pot of salted hot water. It takes about ten minutes to warm the sausage all the way through.

The hot water you use should stay around 70 degrees, and you should not allow the water to boil. If the water boils, the casing of the sausage can split or break, and this can potentially affect the overall flavor of your white sausage.

When it is time to eat the sausage, cut off the tip and suck the sausage out of its casing. You can also choose to make a long slit in the sausage and pull away from the sausage casing with your fingers or a knife and a fork.

What makes Weisswurst so special?

Weißwürst is a salty and parsley-infused sausage made with pork and beef. The sausages are quite flavorful thanks to the saltiness of the parsley and the richness provided by the bacon. Weißwürst has an uncommon quality in that it can’t even be eaten without its hog casings.

Casings from the Wiener schnitzel, for example, may be used to extract a variety of flavors. That is how you squeeze the sausage in Weisswurst; it has many variants of extraction from the casing. Wurst is frequently eaten with mustard, especially if it’s a white-muster combination.

What is the Shelf Life of Weisswurst?

What to Serve With This Weisswurst Recipe

You will find your weisswurst is best served in a tureen in its own cooking water. It is best eaten when accompanied by a soft pretzel, sweet mustard, and a half-liter of Hefeweizen. This is a light wheat beer that Germans say is good for digestion. Any other Bavarian beer will pair well with this dish also.

Weisswurst can also be made with sauerkraut, red cabbage, potato mash or potato salad, and beer-braised onion if you are looking for some real homemade comfort food.

What other meat can be added to the weisswurst?

Weisswurst can be made from a variety of meats, including veal, pork fat, pork skin, pork belly, and pork butt, but the basic recipe is simply a combination of veal and bacon. You can blend pork fat and ground pork skin and add lemon zest, fresh parsley, and freshly grated cardamom pinch to the pork mixture.

The Weisswurst is a great way to enjoy sausage as your main dish paired with side dishes and beer or other beverages. Although it takes some time and effort to prepare it everything is worthwhile.

Weisswurst Recipe: How to Make This German Sausage 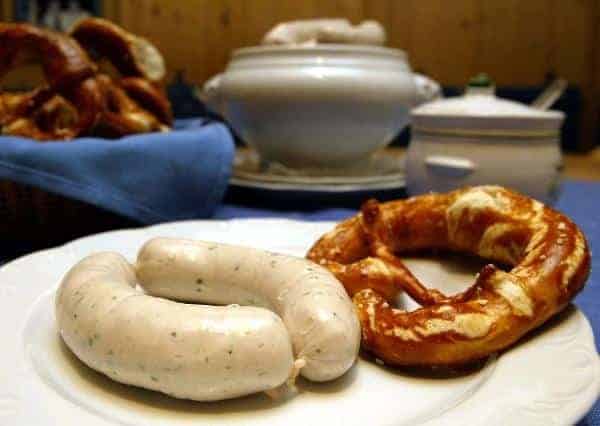 Want to savor the flavor of the delicious German sausage at home? Try our favorite Weisswurst recipe to make this Bavarian delicacy.

Can you eat the skin of weisswurst?

The skin of your weisswurst should never be eaten. Most sausages in Germany can be eaten whole, skin and all, but weisswurst must be carefully removed from the skin before it is consumed. The skin of the white sausage is much thinner than other traditional German sausages.

What is the difference between weisswurst and bratwurst?

How do you tell if German sausage is cooked?

To tell if your weisswurst is cooked after it is heated in salted water, you can insert a meat thermometer to check the temperature. Its internal temperature should reach 170 degrees Fahrenheit.

What is the best German sausage for grilling?

Bratwurst and knockwurst are the best sausages for grilling because they have much thicker skin. Weisswurst should only be heated in hot water that is not boiling or gently pan-fried. The high heat of a grill could cause the sausage casing to split.

Can you freeze weisswurst?

Yes, but it must be cooked first. Then it can be frozen for up to two months before cooking.

What is the best way to reheat weisswurst?

Weisswurst should never be microwaved or reheated in boiling water. The best way to reheat weisswurst is in a pan with a small amount of water, just enough to cover the bottom. Cover the pan and heat slowly over low heat until the sausage is hot all the way through.

Do you need to cook Weisswurst?

Weisswurst must be cooked before it is eaten. It can be boiled, pan-fried, or grilled.