Welcome aboard the Alaska Railroad! The popular mainline stretches all the way from Seward to Fairbanks, covering a distance of 470 miles. Throughout its passage, the railroad connects communities from Alaska’s interior to the Southcentral region.

The Alaska Railroad is a staple for any trip to Alaska and for us it was a must-have, must-do for our Denali National Park itinerary.

Completed in 1923, the Alaska Railroad is more used today than it ever has been.

It took only nine years to create this massive railroad, and was inaugurated by President Warren G. Harding on his visit to Alaska.

Here is a map of the Alaska Railroad map to help you plan for your trip.

In 1943, the railroad was expanded, adding 12 more miles to the total length. Today, it goes all the way to Whittier, a small town surrounded by natural beauty and scenic views. The railroad is open all year round, although the schedule is different in every season.

It’s bustling with visitors in the summer months, from May to September, but that crowd gets smaller from September onward as Alaska starts getting colder.

When booking yourself a seat, you’ll find it’s pretty simple as you can book from the Alaska Railroad Corporation.

It’s also possible to book a seat from companies affiliated with the corporation, such as Denali Rail Tours, The Wilderness Express, and Princess Rail Tours.

Keep in mind that there’s one departure every day, so I’d suggest booking your ticket well ahead of time.

Routes of the Alaska Railroad

The Alaska Railroad starts from Seward and reaches the state capitol Anchorage in 4.5 hours. From there, it moves on to Talkeetna, which is a 3-hour ride. The time between Talkeetna and Denali is another 4.5 hours.

Denali is known internationally for its beauty and stunning views. However, don’t be surprised if you don’t spot the Denali Mountain peak from the National Park Station since it’s only visible from that distance for a few weeks every year.

The highlight feature of Denali is the National Park. If you plan on seeing the whole park in one go, hop on the shuttle to take you around the park. Or, if you’re with a group or family, take the van tour for a more private tour.

Another way to explore the park is by renting a bike, but if you’re feeling really adventurous and want to take in the beauty of Denali from above, book a flightseeing tour.

From the bird’s eye view of a plane or helicopter, you’ll be able to appreciate the sprawling beauty of the tundra, vegetation, and glaciers underneath.

It’s an experience of a lifetime – no exaggeration there.

Some tours even let you land on a glacier.  If you like the sound of that, you’ll definitely want to check out our Via Travelers YouTube video where our helicopter lands on the Yanert Glacier.

How cool is that? It was exceptionally cool – I mean, we were on a glacier, it doesn’t get any colder than that!

If you plan on spending more time near the water, you can go rafting in the Nenana River. You can either choose a guided tour where the guide commands the boat or book a tour where everyone gets hold of a paddle to navigate the boat themselves.

Whichever you choose, the view of snow-capped peaks from the middle of the water is bound to make you feel at peace. If you have the chance to spend a little time in and around Denali and absorb the tranquility, check out these best places to stay in Denali while you are there.

Once you’ve soaked in enough of Denali, hop back on the railroad and head to the last stop – Fairbanks.

It’s a 4-hour train ride that takes you through nature, including alpine forests and snow-dusted mountain ranges.

Make sure you get the window seat and charge your phone’s battery fully because you’re going to want to capture a snap of every glacier and mountain you pass by.

There’s also a great chance that you’ll spot some of Alaska’s wildlife right outside your window.

Among all routes, the one between Anchorage and Seward is considered the most visually pleasant, but every route on this railroad is infinitely more breathtaking than your everyday train ride.

If you want to cover Denali and Fairbanks, take the Denali Star. It’s a 12-hour route making the journey every day in summer from Anchorage to Fairbanks, while another train makes the return journey at the end of the day.  No matter if you’re coming or going, while you’re sitting in your carriage, gazing out of the window, you’ll find yourself surrounded by nature on all sides.

To give yourself a break from sitting, head over to the Denali National Park or catch a bite at the stops in Talkeetna and Wasilla.

If you’re lucky enough to be visiting the park on a clear day, you might catch the sight of Denali Mountain, which is the tallest mountain in North America.

Getting back on the train your journey will take you past the Poplar River. Other key sights along the way include the Savage River and the Mountain Vista.

The views get even better at sunset, and there are few sights I’ve seen in this world more moving than watching the sun setting behind one of the peaks.

If you’re planning to take a day trip, another good route is via the Glacier Discovery train, since it offers a convenient round-trip, taking you from Anchorage to Whitter.

The train stops at Girdwood for some time allowing you to take pictures or fortify yourself with a snack and some coffee before continuing your trip.

This route, just like the one taken by the Denali Star, is also framed with views of the trees, lakes, rivers, and mountains that are just otherworldly in terms of beauty.

It’s not very often that you find all the most stunning elements of temperate, sub-arctic, and arctic nature in one place, but that’s what makes the Alaska Rail Road unique.

As for the trains themselves, they’re very comfortable, which is great since your butt will be planted on one for a while.

See Related: Fun & Best Things to Do in Homer, Alaska

You can choose between Adventure Class or GoldStar Services, depending on the route you’re taking.

We took the GoldStar Service and it was completely worth it. It was the experience of a lifetime that I certainly will never regret taking. The views from both the top-level service with the glass roof as well as the bottom level for full-service dining were extraordinary.

Plus, the trains have wheelchair access, non-smoking cars, and baggage service in Fairbanks, Talkeetna, Anchorage, and Denali.

If you want to book your ticket or check the fare, all the information regarding the route and your train is available on the Alaska Railroad website.

Also, you can check the train schedules for different seasons to avoid any disappointment, since some routes are only available every other day during winter.

The construction of this mighty stretch of railroad began in 1903 when the Alaska Central Railway built a 50-mile railroad starting from Seward. The plan was to help connect northern Alaskan settlements to her southern seaports, and ferry lumber, minerals, and animal goods south via the railroad.

In 1910, the railway was extended up to 71 miles from Seward while the Alaska Central Railway was rebranded as the Alaska Northern Railway Co.

Three years later, in 1914, the US Congress agreed to finance the further extension of the railroad to Fairbanks, Alaska’s largest city, located in the center of the state.

At the time, the project was estimated at 35 million dollars, and the Alaska Northern Railway Co.’s headquarters were then established in Anchorage, the state capitol.

By 1923, the railroad was fully constructed.

President Warren Harding marked the completion of the project by driving the final railroad spike into the ground. Following the American railroad tradition, this final spike was made from solid gold.

By the 1930s, Alaskan industry had increased rapidly, thanks in majority to the railroad and the business that came with it. There was now just enough money and population in Anchorage, Fairbanks, and Seward to keep the railroad in business.

It wouldn’t be until 1938 that the railroad saw its first year of profits. These profits would continue to grow with the outbreak of World War 2 as America used the railroad to help supply Canada with arms and war material, as well as her own forces once she joined the fight. The railroad played a major role in transportation during the war, and its legacy was secured by that horrific period.

In 1943, the corporation built two tunnels via the Chugach Mountains to give the railroad access to Whittier.

At that time, Whittier was an important town since it was a vital military port and the Alaska Railroad was imperative in supporting the war effort. The very next year, Whittier opened another railroad port as steam engines were replaced by faster, more reliable, diesel machines.

The end of the war saw profits decline as the need for war materials had essentially evaporated.

1966 marks the year when the last steam engine left the railroad, with all engines now running on diesel.

In 1981, the railroad formed an agreement with the career centers in Anchorage and Fairbanks school districts to initiate a tour guide program for high school students.

The aim of this program was to train the kids how to host passengers on trains, as the state was seriously considering buying the railroad and using it as a tourist attraction. Just three years later, the Alaskan railroad took a step toward the classiness that it exudes today.

In 1984, the railroad accepted contracts for the double-decker luxury coaches.

The next year, the state of Alaska acquired the railroad as state property. In the years that followed, the railroad was often blocked due to flooding and other weather elements, but it was always cleared and journeys resumed nonetheless.

In 2002, the Alaska railroad generated 11 million dollars in revenue for the first time. Also, the authorities started a program to use software technology to reduce noise production and diesel emissions.

The most successful year in the history of the railroad was 2003 when revenue of 14.5 million dollars was generated.

Today, the railroad serves as a communication channel between the adjoining towns and is frequented by thousands of tourists visiting Alaska every year. Many regard it as the best way to get a view of Alaska’s breathtaking interior – I am among those visitors.

With that, I’ll be signing off. Hopefully, the glorious natural views you’ll see from these Alaskan railroad routes tempt you into coming to this stunning state – I have a funny feeling they will.

If you enjoyed this, please check out our Instagram at @viatravelers or subscribe to the ViaTravelers YouTube channel to get all of our travel pieces in real-time. 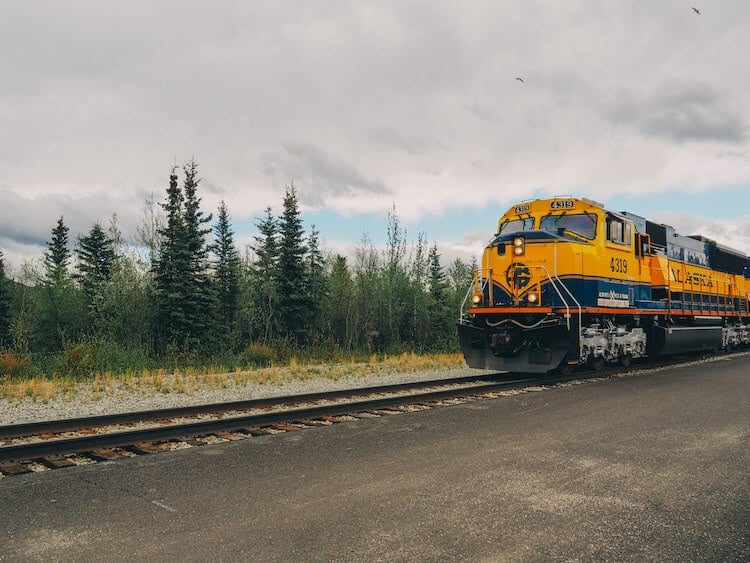