Bayerische Semmelklösse is also often known as “SemmelKnödel,” which is a German translation for Bavarian Bread Dumplings. These bread dumplings are a German specialty often served during traditional gatherings and celebrations. It is a mouthwatering dish you can share at dinners and on special occasions.

This hearty German dumpling recipe mainly consists of bread, milk, and eggs. It is a dish with great texture, and after succeeding in serving this full recipe, these delicious dumplings will make you and your tastebuds feel great!

In Bavarian cuisine, there is a very tasty dish which is called Bayerische Semmelklösse. If you haven’t heard of it yet, this is a section to learn more about one of the most traditional German recipes.

The Bavarian bread dumplings or Bayerische Semmelklösse, also known as “SemmelKnödel,” is a German dish made with stale bread rolls that can be served as a side dish to wursts, soups, and meat dishes with sauce. The food’s history can be traced back to the early 1920s.

It was commonly prepared with old bread rolls to use them up and not let them go to waste. It is also considered a classic Bavarian meal and is frequently served during Oktoberfest or on other occasions during fall or winter.

Where did Bayerische Semmelklösse originated?

Bayerische Semmelklösse is a German bread dumpling dish that was created in Bavaria. After World War I, there was severe food scarcity across Germany. The bread was a luxury item, but it was very necessary for survival, so people came up with creative ways to make it last longer and turn the scraps into something delicious and filling. People then sought methods to utilize these stale bread rolls and eventually made bread dumplings that could be made quickly and cheaply.

See Related: Best Things to do in Munich | Top Attractions

What main ingredients are in Bayerische Semmelklösse?

The ingredients for Bavarian bread dumplings are quite basic: stale bread rolls, eggs, salt, parsley flakes, and salt and pepper to taste. There are also different variations to this, and an example of it is the German-style potato dumplings recipe. This potato dumpling recipe is called “Kartoffelklöße” and is made by adding mashed potato balls or potato starch.

What is the taste of Bavarian bread dumplings?

Bayerische Semmelklösse/Bavarian bread dumplings taste like a combination of bread, eggs, and flour with some salt. It has a smooth and moist texture while being quite firm at the same time. But making the potato varieties adds a whole new flavor to it.

What is the best way to cook Bavarian bread dumplings?

To make Bavarian bread dumplings, the best approach is to simmer them in a soup or sauce for about 20 minutes. This will ensure that they are fully cooked and absorb some of the soup or sauce flavors. But the easiest way is to bring water to a boil, put the bread dumpling dough or add the potato balls in, and wait for it to rise from the water, which indicates it is cooked entirely.

How did it become a popular dish?

Due to their simple ingredients and non-complex instructions, the Bavarian bread dumplings became a famous supper. Not to mention that the dish is delicious and can be eaten by almost anyone.

It has even been featured on prominent cooking programs. So you should give Bavarian bread dumplings a chance if you want to try a new and interesting German meal!

What is the difference of the Bayerische Semmelklösse to the Semmelknödel?

There is no difference between the Semmelklösse and the Semmelknödel. Both are German words that, when translated to English, result in “bread dumplings.”

The difference between Semmelklösse and Kartoffelklöße is its main ingredient. While Semmelklösse uses stale bread cubes, the latter uses cooked potatoes or potato dough. All other ingredients and the cooking methods are the same, including boiling them in a large pot until the dumplings rise.

What are the health benefits of Bayerische Semmelklösse?

Most ingredients of the Bayerische Semmelklösse are beneficial for health:

See Related: Best Amsterdam Food You Need to Have

How to make Bayerische Semmelklösse: a traditional German dumplings recipe

To add more texture to the dumplings recipe, buy raw potatoes, mashed potatoes, or potato flour as an addition to the ingredients. Any variety of all-purpose potatoes will work.

For German potato dumplings, take raw potatoes and put them in boiling water until fork tender. You can choose to peel the potatoes if you like, but it’s not necessary, especially if they come already cleaned and prepared from the supermarket.

Mash potatoes using a potato masher, potato press, or a fork, and add them to the cut bread into small cubes and other ingredients. You can also add a pinch of ground nutmeg for additional taste.

Then, do the same process as the Bayerische Semmelklösse in cooking:

What other ingredients can be added to Semmelklösse?

You can add plenty of other ingredients than the recipe calls for. To add more flavor, you can look into incorporating the dumplings with potatoes, other vegetables (carrots, peas, green beans), poultry (chicken, turkey), cheese, and herbs.

You can also add a side dish, such as sausages, meatballs, rice, macaroni and cheese, gravy, and different broths. Broth can be used as a dumpling soup or made as a base for simmering to add extra flavor.

What are two ways of forming bread dumplings?

You may stuff whatever you want into your dumpling balls, and the amount of bacon meat inside is entirely up to you. The easiest way to form the bread or potato dumplings is, as mentioned above, to make the ingredients into balls, then drop them in a large pot of water before it boils.

Another way is to form the dough into a fat sausage or logs. Cover them with aluminum foil or plastic wrap and firmly seal them. After that, you can then steam them as a whole, wait until it cools, and slice. This method is called Servettenknödel, which when translated means “napkin dumplings.”

What are the reasons that dumplings might fall apart?

Dumplings can fall apart during the cooking process for a variety of reasons. You might believe your dough is not as smooth as it appears to be. Add bread crumbs a tablespoon at a time if your dumpling dough falls apart when you place it in the water or if the mixture is too fluid. The second reason is that the water is boiling too vigorously when you drop your bread or potato dumplings in.

You could determine the consistency of the dumplings has improved by preparing a test dumpling. Take one dumpling and make a test cook until you nail the end result. If you’re making big potato balls, it’s preferable to slowly lower the dumpling into simmering water than to roll the dumpling dough and steam it as a whole using the Servettenknödel method.

Use the right bread roll

Keeping the dumplings intact after you’ve finished cooking them is a must. To do this, using a crusty roll that is relatively dry and firm would be ideal.

There is a chance that the dumpling dough will be overly moist or too dry depending on the type of bread you’ve chosen to use. Make sure your bread has dried out at least overnight before incorporating it into this recipe.

In this recipe, we opted to use the kaiser bun. You can also use slices of stale bread, hot dog buns, hamburger buns, and more.

How to improve the flavors that go into German bread dumplings?

Bayerische Semmelklösse recipes vary quite a bit in the ingredients used, but all of them have a few things in common: they are based on stale sliced bread and cooked in a liquid (boiled or steamed), and they usually get served with meat or broth-based sauce. Instead of dipping the bread or potato dough in simmering water, you can use stock to increase flavor.

Stocks are traditionally made from meat and vegetables. Serve Bavarian soup dumplings with roasted pork or chicken for a more substantial supper. For seasonings, you can use more than salt and pepper. It is an option to have fresh parsley and ground nutmeg. To add texture, you can use boiled potatoes and breadcrumbs.

What is the Bayerische Semmelklösse best served with?

This recipe may be served either as a main course or as a side dish. Bavarian Bread Dumplings taste great with almost every German soup, such as spicy Bavarian Tomato Soup. It’s also commonly served with German Sausages on the side.

It also goes wonderfully well with sauerkraut, which pairs well with most hearty soups when added to potatoes or another carbohydrate. A simple mushroom sauce can also make a difference in taste.

What to do with leftover potato dumplings?

If you happen to have made too many potato dumplings and you are left with more, you can always store them in freezer bags. Any extra Semmelknödel or Kartoffelklöße can be kept fresh in the fridge for three to four days if stored in an airtight container.

To make sure they remain in a ball form, get a rimmed baking sheet or cookie sheet to separate each potato dumpling. When the day comes that you are craving one, you can always reheat potato dumplings using the microwave. 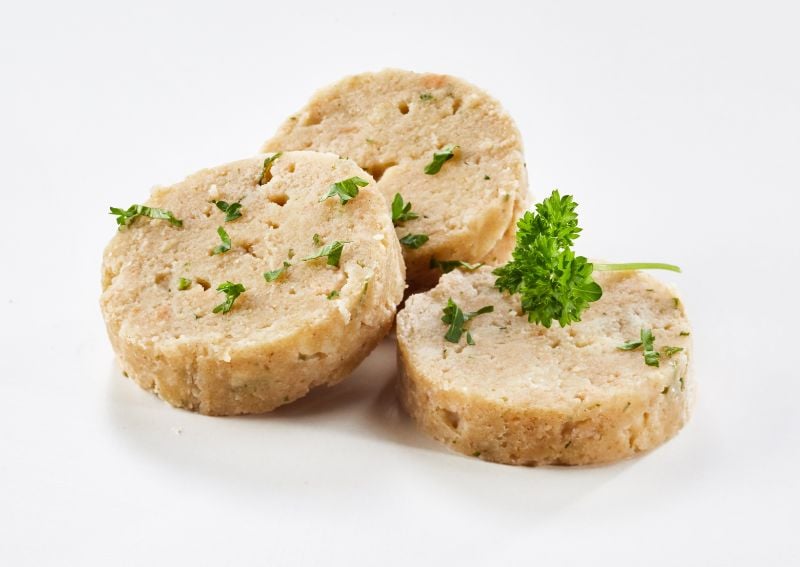 Recipe Instructions: Slice hard bread rolls into small cubes and place them in a large bowl, allowing them to dry out overnight. Warm a large kettle of milk until it simmers. Soak bread in hot milk. Bread should be moist but not soggy by leaving it for 20 to 30 minutes. Melt butter by putting it in a frying pan above medium heat. Fry onion in the melted butter until it gets transparent. Add bacon to the onions until it has a golden brown color. Add the cooked bacon and onions to the large mixing bowl where the bread is. Add parsley flakes, eggs, salt, and pepper to the bread to create the dumpling dough. Mix and knead all ingredients together until you have a smooth dough. Shape into dumplings the size of a tennis ball. Wet your hands frequently to avoid the ingredients sticking to your fingers. Drop the dumplings into simmering salted water in a large pot before it boils. Let the dumplings simmer uncovered for 20 minutes or until dumplings float to the surface. Lift the dumplings using a slotted spoon to have them drained in the process. Serve the cooked dumplings and enjoy! For a bit of flair, top the dumplings with parsley flakes, as any food stylist would.

Can I use another type of bread?

Yes, you can use other types of bread as long as it’s stale. However, if the bread isn’t very dry and hard, this will result in a less soft and moist dumpling. Instead of using kaiser buns, you can use French bread, unseasoned stuffing bread, and pretzel buns.

What is the best way to serve Bavarian bread dumplings?

The best way to serve Bavarian bread dumplings is to simmer them in salted water or broth for about 20 minutes. This will ensure that the dumplings are cooked through and have absorbed some of the flavors from the soup or sauce.

Where can you find authentic Semmelklösse?

This dish is a staple of Bavarian cuisine, making it commonly served at Germany’s Oktoberfest and other Fall and Winter events. But, if you happen to find yourself in a major city either in Canada or the United States, you are likely to have easy access to a local German restaurant serving authentic Semmelknödel.

What are other variations to this bread dumpling recipe?

As discussed, the bread dumpling recipe can be made with mashed potatoes to make the German potato dumpling recipes. You can either peel the potatoes or not, add more vegetables or meat inside, or use different broths to simmer them in.