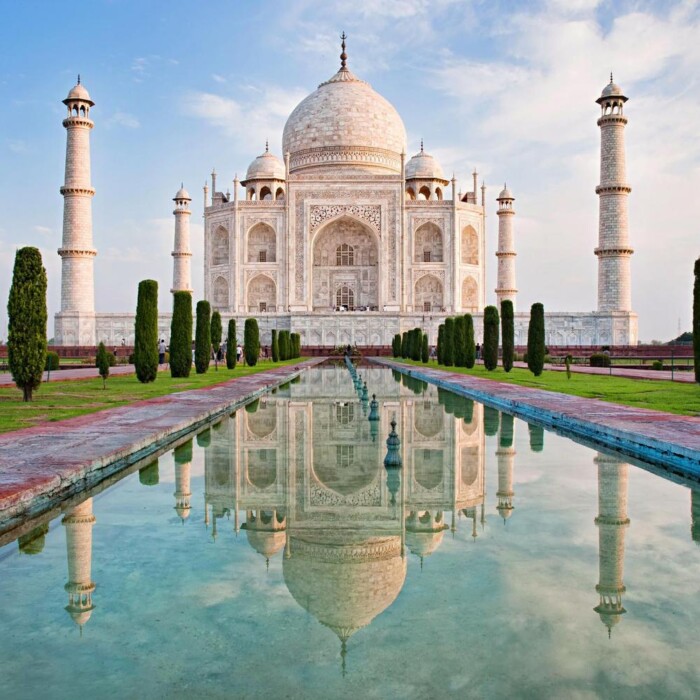 Planning a trip to India? Here’s your guide to the Golden Triangle in India that covers everything you need to see and do in the three major cities.

India is a vibrant country with a rich history that spans many generations. One of the famous routes in this iconic destination is The Golden Triangle in India. The trip will take you across India’s most visited cities: Delhi, Agra and Jaipur.

The route earned the name ‘Golden Triangle’ because the three cities cover the country’s most majestic sights and form a triangle on the map.

The three destinations boast and variety of palaces, mosques and markets offering a glimpse into India’s storied history.

Each leg of the triangle is 200km apart and takes 4-6 hours by car or train. If India is on your bucket list of places to see, The Golden Triangle is well worth your time.

The Golden Triangle comprises of three major cities in India. Let’s jump into the best things to do in each one. 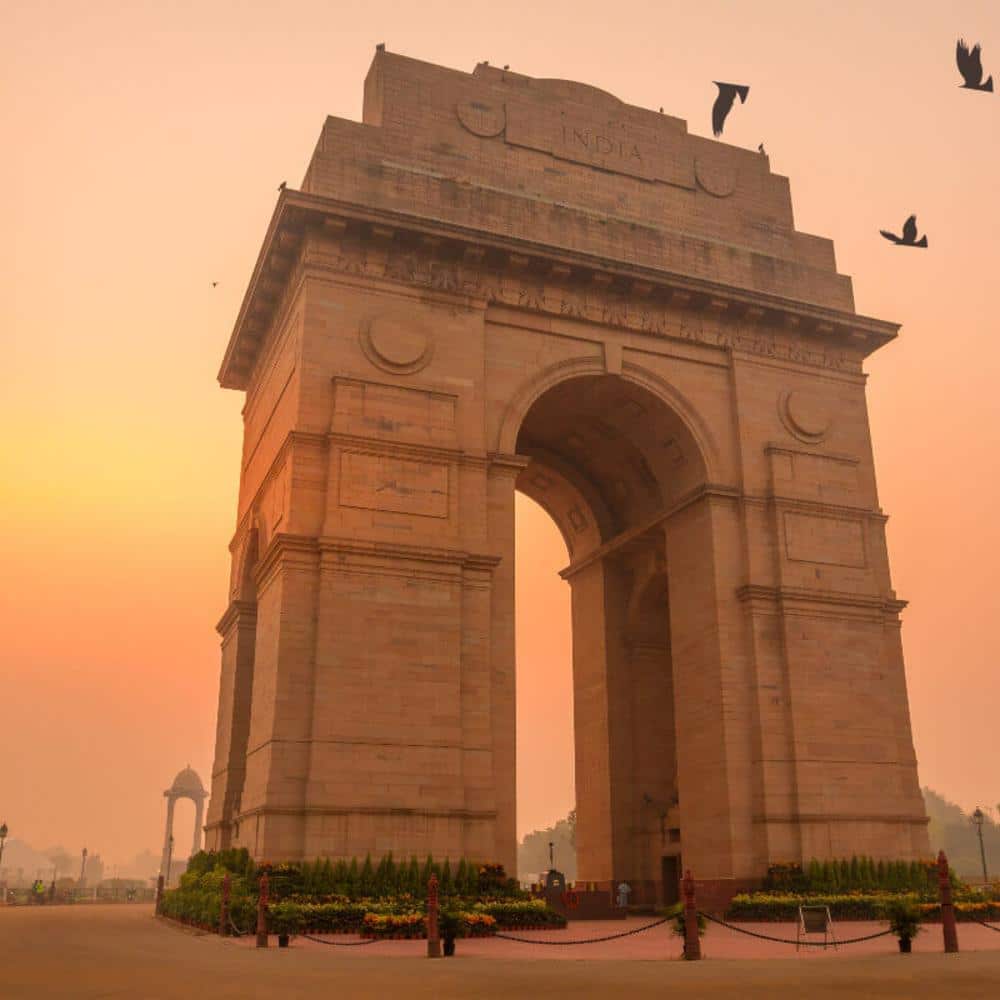 Delhi is the capital city of India and has an international airport with flights to almost every country in the world. If you are flying to India from abroad, this is the best place to start your trip. While the city is known for its historic landmarks, it has a population of over 19 billion people so expect some big crowds.

Your best option to get around the city is by Uber or an auto-rickshaw. Make sure to pick a hotel in the center of the city for easy access to all the major tourist spots.

If you want to avoid the hassle of getting from one place to another, consider taking an 8-hour guided tour of Old and New Delhi.

Here are the best places to see in the city: 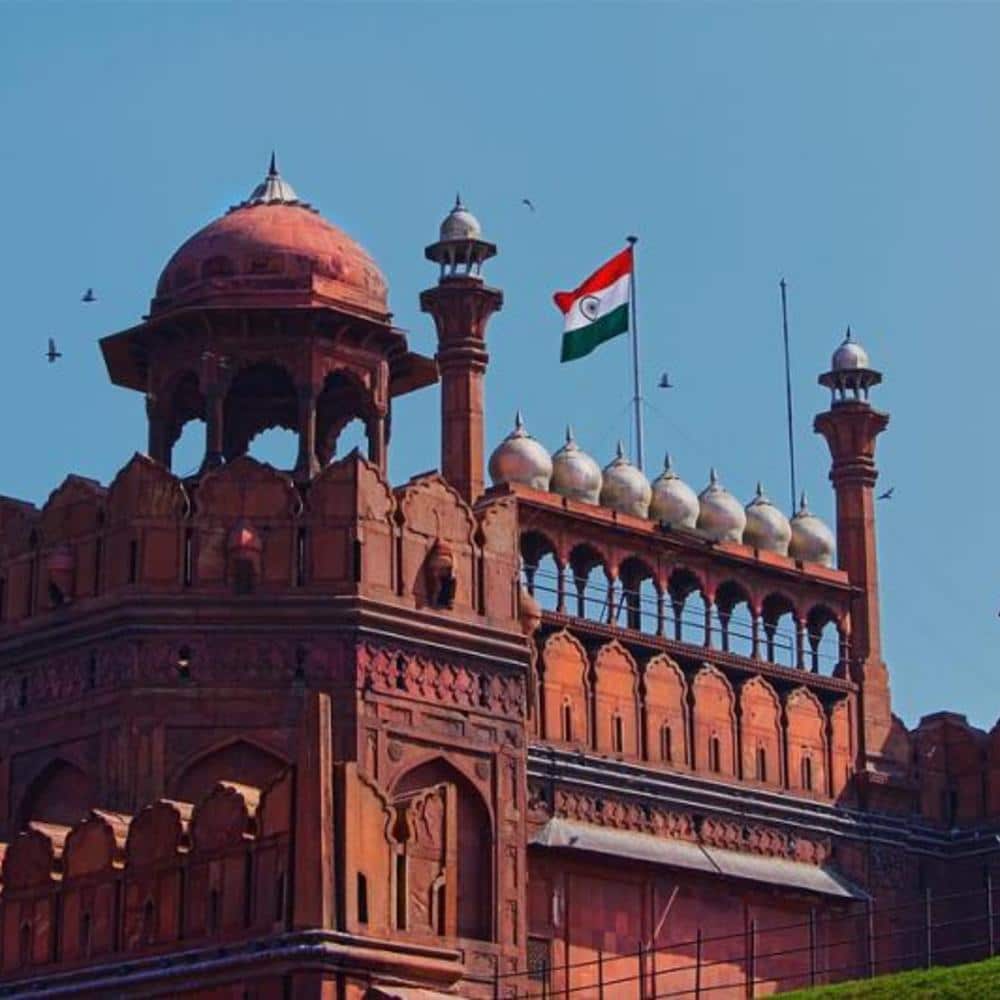 The Red Fort, is without a doubt, one of Delhi’s most famous attractions. It was once home to the Mughal royal family and has since been converted to a historical sight. Enclosed by two gates- the Delhi Gate and the Lahore Gate, the fort overlooks the Yamuna River.

The attraction earned its name from the walls made of red stone that encapsulate the fort. Make sure to get a guided tour of this UNESCO World Heritage site to learn all about the royal family that resided here and the significance of the fort in wars.

The India Gate is a first world war memorial that was built in remembrance of the 700,000 soldiers that were killed. The structure features a large arc and stands at the center of the city. The best time to visit the India Gate is in the nighttime to see it lit up or at sunset. Given the central location of the gate, expect some big crowds. 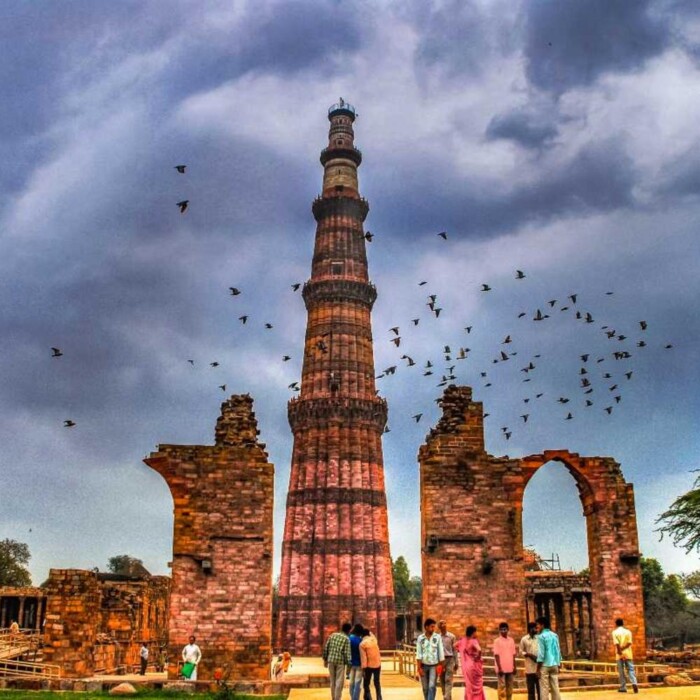 The Qutb was built by the Mughal Empire in 1386 and consists of a mosque, the Qutb Minar and Alai Darwaza. While the attraction is mostly a ruin, it is still worth a visit to marvel at this exquisite structure.

The Qutb Minar features a number of pillars and walls that are decorated with intricate patterns and carvings.

A large red stone pillar with its curvatures is the highlight of this attraction.

You can take a full-day tour to combine this site along with other areas of interest in Delhi.

Another famous attraction located just a short walk from the Red Fort is the Jama Masjid. This is the largest mosque in India and was built in the 1650s by the Mughal Emperor Shah Jahan.

The mosque is open every day from sunrise to sunset except during the prayer hours.

While there is no fee to visit the attraction you will need to pay an INR 300 camera fee. Make sure to wear an outfit that covers the shoulders and legs when visiting the holy site. The stunning mosque made of red and white stone is one of Delhi’s biggest architectural wonders. 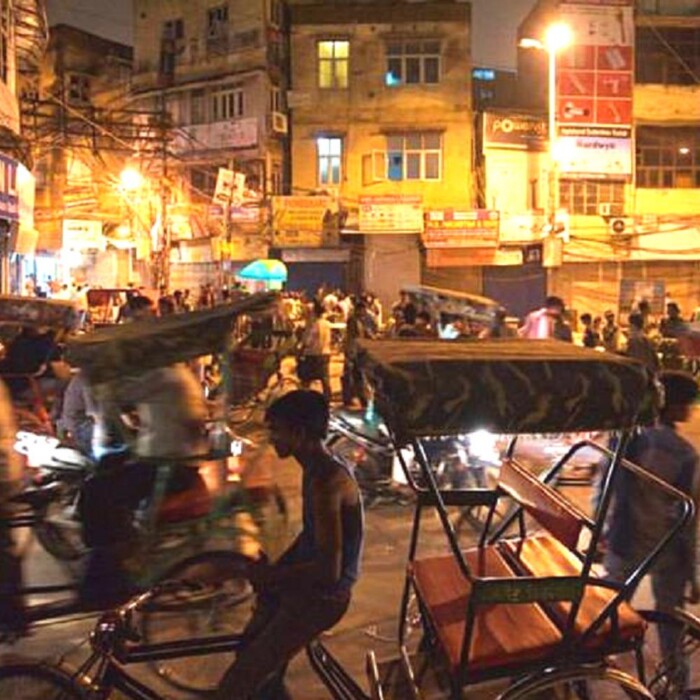 Delhi is India’s most famous shopping destination so make sure to check out one of the city’s many bazaars during your trip here. The most famous market in Delhi is Chandni Chowk which includes many smaller markets that sell a variety of spices, artifacts and clothing.

The market was built in the 17th century and attracted traders from all over the world. Today it is Delhi’s most crowded locale and is often overrun with cars, buses and people going about their daily lives.

While the experience can be overwhelming, it offers a glimpse into Delhi’s vibrant culture. You can even take a tour of the markets and temples in Old Delhi.

Best places to stay in Delhi

Agra is the next stop in your tour of the Golden Triangle. A 1-2 day stopover in this city would be ideal since the Taj Mahal is the most famous attraction.

You can take the Express Train from Delhi to Agra.

The city of Agra may not be well-known for many things but it is home to the iconic Taj Mahal, and hence one of India’s most visited cities.

The structure is one of the seven wonders of the world and is a must-see attraction on a trip to India.

The Taj Mahal was built by the Mughal Emperor, Shah Jahan as a resting place for of his wife Mumtaz Mahal. The architectural wonder was constructed with white marble and features intricate calligraphy on its pillars.

Given Agra’s high pollution levels, the Taj Mahal has undergone some preservation work to prevent deterioration. The best time to visit the Taj Mahal is during sunrise and sunset to catch the beauty of the mausoleum in the light. You can also view the structure on a boat cruise on the Yamuna River.

Since the Taj Mahal is a bucket list destination, make sure you get there early for some great pictures. 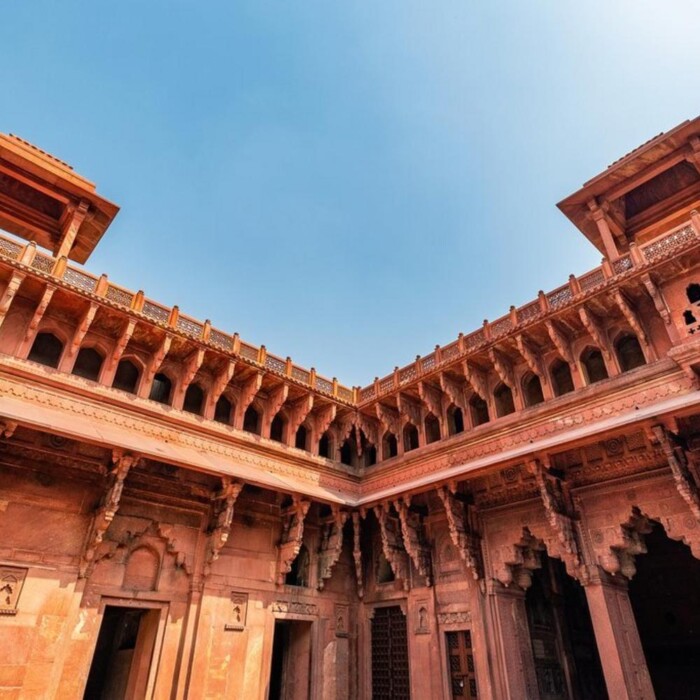 If you have some spare time during your stay in Agra, consider checking out the city’s “other” attraction, the Agra Fort. The buildings in the fort were built in the 16th century by Emperor Akbar. This is also the place where Shah Jahan (who built the Taj Mahal) was imprisoned for many years. While he had a view of the Taj, he could never enter it.

The Agra Fort is home to many buildings and you can spend hours walking the grounds and marveling at the architecture.

The Anguri Bagh made of white marble is one of the most famous structures in the Agra Fort. You can even take a combined tour of the Taj Mahal and the Agra Fort.

Best places to stay in Agra 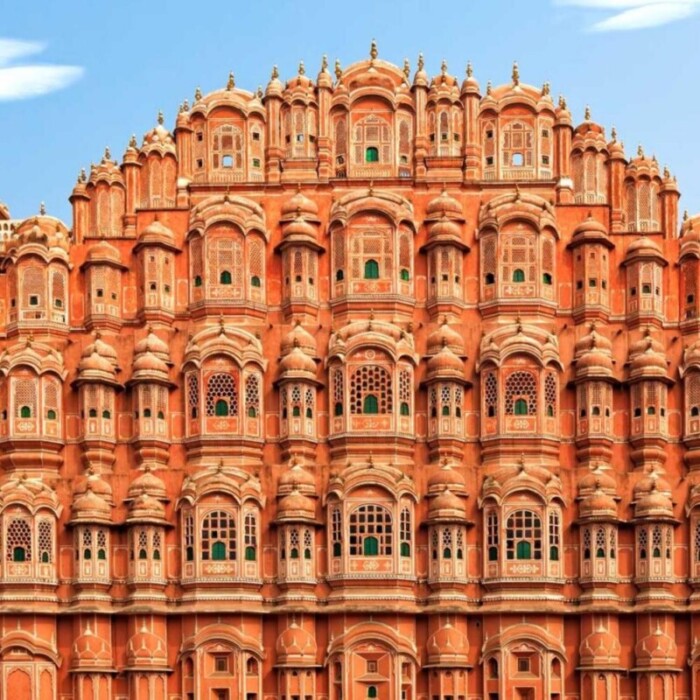 The Pink City of Jaipur is easily one of India’s most picturesque destinations. This city has a population of 3 million people and earned its name for its stunning pink architecture. Various forts and palaces, each with its own storied history dot this beautiful place. Jaipur is 167 miles from Delhi, you can either take a train or plane here. Here are the top spots in the city. 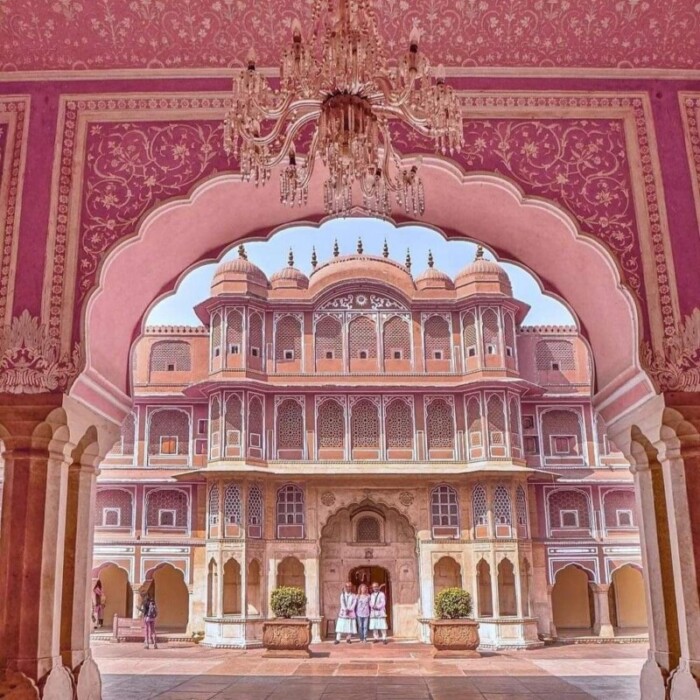 One of the most important monuments in Rajasthan’s history is the City Palace. The palace was built between 1929 to 1932 and has been home to many royal families in Jaipur.

In addition to the stunning buildings, City Palace has various gardens and courtyards that add to its beauty.

Almost every corner of this attraction is totally picture-worthy. Located right next to the City Palace is Jantar Mantar, an astronomical observatory that is worth checking out.

The Hawa Mahal is one of the most photographed locations in Jaipur and with good reason. This magnificent structure made of pink stone sits in the center of the city and is hard to miss.

The Hawa Mahal was built in 1798 and is a five-story building with 953 windows.

Each window features intricate latticework painted on a window in the shape of a honeycomb. It is a combination of the Rajput and Mughal architecture depicting the dominance of both empires in the city.

For insta-worthy pictures, head to the Tattoo café, a rooftop café opposite the Hawa Mahal. You can even take a combined tour of City Palace and Hawa Mahal.

The Jal Mahal or the Water Palace is located in the Man Sagar Lake. The palace sits on a water body that spans over 300 km and is set against the backdrop of the Aravali Hills. When the lake is filled with water to the brim, nearly four of its five storeys are completely underwater.

The palace has undergone a significant preservation process to retain the beauty of the water palace.

While visitors cannot visit the palace itself, you can marvel at its magnificence from the banks of the lake. The best time to visit the Jal Mahal is during the nighttime. 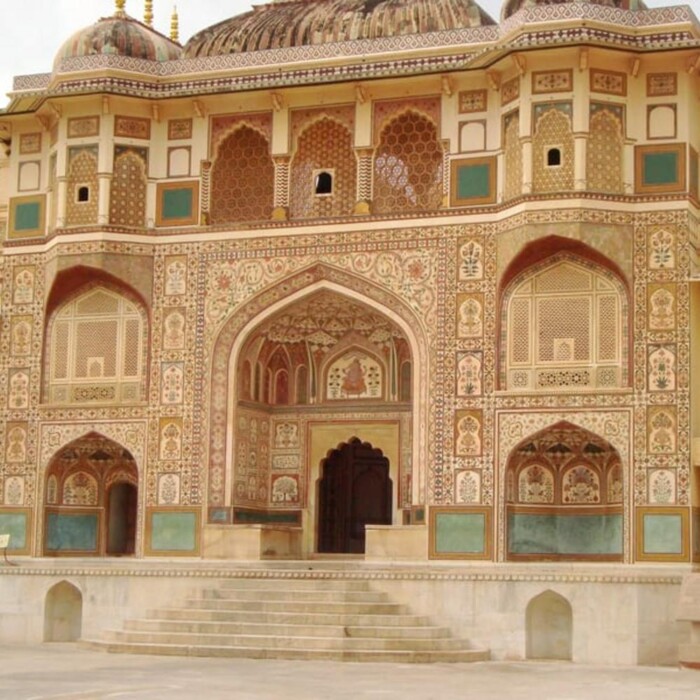 Located in the village of Amer, the Amber Fort and Palace is one of Jaipur’s must-see attractions. The palace is built in red sandstone and marble, keeping with the Pink City’s colorful architecture.

The fort comprises of four main sections, each with its own gate and courtyard. The courtyard located east of the palace saw many victory celebrations and parades in its heyday.

Given the expanse of this place, it is recommended that you take a tour to cover all the major spots while learning about its history.

The Jas Mandir, the Shila Mata Temple and Sheesh Mahal are the highlights of the Amber Fort and Palace.

You can even take an elephant ride during your visit to Amer, either at the fort or at one of the surrounding elephant villages.

See Related: Best Vacations for a Group of Friends

Best places to stay in Jaipur 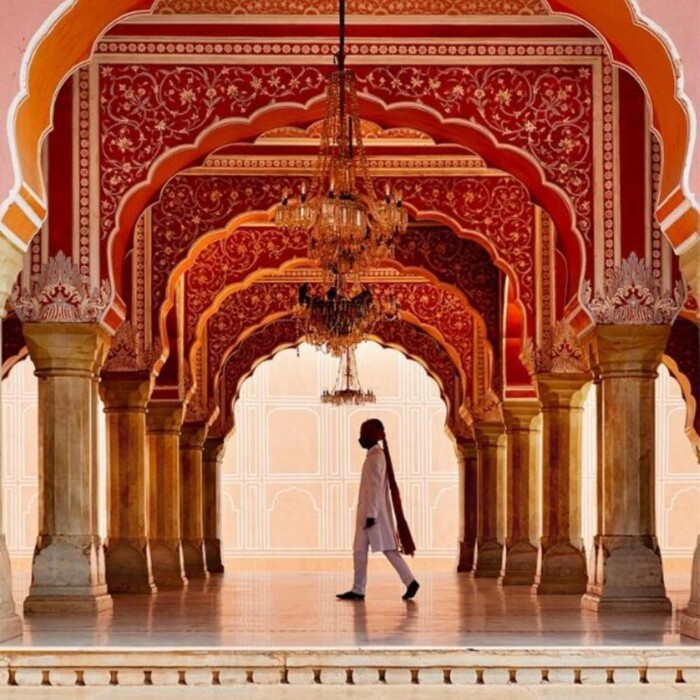 Tips for visiting the Golden Triangle

India is a massive country with a rich history and a vibrant culture. A tour of the Golden Triangle is the perfect way to get a taste of the best that North India has to offer with the unforgettable sites that dot the three cities.

From the iconic Taj Mahal to City Palace and the Amber Fort, a trip to this country is nothing short of exciting.

India is known for its humidity so make sure to pack summer-friendly clothes for your trip. The best time to take a tour of the Golden Triangle is between October and March.

Via Travelers is a modern travel blog providing the best tips, hacks, and itineraries to ensure you have an amazing adventure.

A self-proclaimed digital nomad, Divya has a love for discovering new places. Perpetually ensconced with a book in her hand and coffee in the other, she’s always on the move. As a world explorer, she learnt that traveling helps rejuvenate the soul and fills it with memories and lessons that no classroom can teach.