London vs New York, what is better? That’s a tough choice and probably why you are here. We highlight everything you should know about these two iconic cities.

London and New York are top destinations for tourists and immigrants alike.

Each city boasts amazing food, theater, and lifestyles, but which one is the right destination for you?

This guide will tell you the difference between London and New York so you can choose which destination is best for your taste.

Differences between New York and London

There are a lot of distinctions and similarities between New York and London. The biggest difference between these two cities is the culture.

New York is a place for motivated, power-hungry youngsters looking for the next big break. Finance and legal moguls will find a lot of success in New York, but you have to work for it. New York never, ever stops. Which means there is always something new to experience, and someone weird to watch on the subway.

The unique part of New York is that it creates very different neighborhoods. Each neighborhood has its own cultural norms and styles. In Williamsburg, you’ll find niche restaurants, iced coffee, and vintage shops.

Meanwhile, the Upper East Side boasts Michelin star fare and expensive cocktail bars. Each neighborhood has its own vibe, culture, and personality. The different neighborhoods of New York is where the residents find their community.

On the other hand, London is a place for all people looking to integrate history and good conversation into their everyday life. Finance and law are also large industries here, but the work-life balance is much better.

In London, there is no better place than standing outside the corner pub at 5 pm. People from all walks of life come together over a pint and a laugh. And, they stay for three more.

In London, the pubs are where you find the community.

Top sites to visit in New York versus London

New York has a lot to offer for visitors. One of the oldest U.S. cities, New York has historic churches and pubs and excellent museums (for a price).

New York has a fantastic 9/11 memorial and museum. It is best to buy tickets in advance though, otherwise, you will get stuck in a long line. Use our link for tickets here for a great price.

In London the museums are free and there are a ton of walking tours. You can also see a lot of sights in a short amount of time.

Check out our itinerary for two days in London – its an efficient way to see all the sites and enjoy the best food!

Let’s get controversial and talk about the type of people who live in each city.

The people in New York

Erratic, forward, and confident – in the best way. To be honest, you have to be partially crazy to live in such a non-stop city. New Yorkers will call you out for anything. That’s what makes New York, New York. It is not for the weak of heart.

But New Yorkers want what is best for everyone: good food, new experiences, and dark humor.

New Yorkers know the best food and the best route in every neighborhood. They call BS on anything slow or not worth your money.

The people in London

Polite, giggly, and judgmental. Londoners have an apt for structure and polite dressing, but will unbutton at the pub. They also love to stare at the oddballs. Only for a few seconds, but there is something about the way they look at you that almost feels French.

Londoners preserve tradition. Tea is still served in the afternoon with a wonderful spread, lawyers wear white wigs, and proper English gets you far.

The difference in food in London and New York

You’ve probably already heard of the infamous New York Slice – a giant piece of pizza with the perfect cheese to sauce ratio, for just a few bucks. Grab and go food is a ritual of living in New York. From bagels to slices, there is something for everyone.

Dinner in New York is a sight to see. Top restaurants book out in advance and wherever you’re going you are likely to see someone famous (in their own way). There is a restaurant for every taste and the vibe will undoubtedly be like any other restaurant you have been to.

From a restaurant that exclusively makes bao to one that thrives on Italian fusion, there is nothing that you can’t find.

London, on the other hand, is not a big grab-and-go culture. Sure you might take away a coffee and pastry in the morning, but lunch and dinner are sitting down.

Popular London meals are Indian food (the curry is to die for), pub fare, and locally raised and farmed foods. Many tourists knock London for the food scene, but the truth is they just don’t know where to go.

Outside of the touristy “fish and chips pub fare” is an entirely new food scene in London. Michelin star restaurants are in every neighborhood and the English are fantastic at sourcing locally. 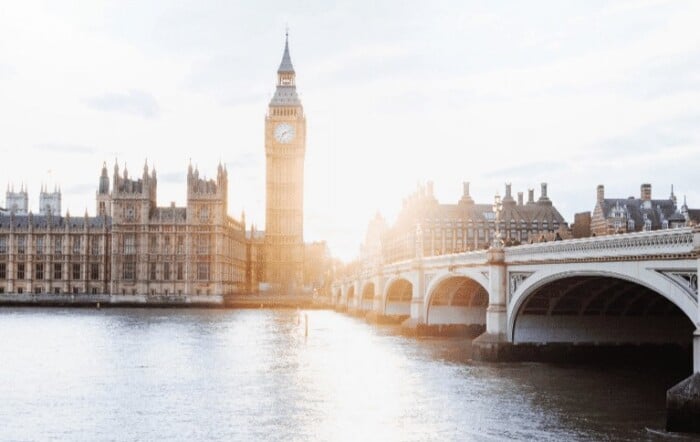 Getting around in London v. New York

One of the benefits of a big city is the public transportation.

Taking a taxi in London? Forget it. It will cost you a nice dinner. Taxi in NYC? Takes longer than walking.

A few transfers or a long train can take a long time.

The London tube and bus transportation is fantastic. You can get anywhere in under a half hour, although if you are far east or west expect a few transfers. The downside to public transportation in London is that it ends early.

Unlike New York, which is basically a 24/7 city, London shuts down at midnight. After that, you’re taking a taxi cab.

See Related: Where to Stay Outside of Manhatten

Short story: both cities are expensive to live in. Rent is high and buying is near impossible. Each city has its own way of being affordable though.

New York rents are insane. You have to have a roommate or you’ll be in a 200 square foot studio apartment. Smaller spots are alright though because you’re never really home. New York always has something to do and somewhere to go.

London is also insanely expensive for rent. The good part though is if you live outside the city it is pretty easy to get in the city on the tube.

Should you visit London or New York

Both cities are awesome to visit. There are a few considerations, though, before you choose which one to visit first.

For the morning bird: London. London is perfect for early risers. There are many unique coffee shops with handmade breakfasts and tons of museums to explore.

Also, walking along the Thames in the early morning is spectacular. Spot the twoer bridge, walk past Westminster and Big Ben, and gaze at all that London has to offer without all the hustle and bustle.

Like this? Read this itinerary on crusing the Grand Union Canal.

For the night owl: New York. New York truly is the city that never sleeps.

Do you like chinese food after a night out at a trendy club? This is your city. New York has some of the best bars and night clubs in the world. The city doesn’t wake up until 9am so you don’t need to worry about sleeping in til noon the next day.

For the foodie: New York. Don’t get us wrong, London has fantastic restaurants (including one of our favorites in the world St. John Bread and Wine). But New York is unmarveled. No matter what your taste New York will have a restaurant on that tiny niche, and it will be the best you’ve ever had.

For the shopper: London. New York has fantastic shopping, but it is nothing like London. London is so close to Paris, Amsterdam, and other world-shopping centers so many of the top boutique brands pop up in London. Also, Harrods. The store that will get you anything you are looking for, including dinosaur fossils.

There is also a wider range of shops in London. You can get an entire outfit for 20 pounds at a fantastic vintage shop or splurge at one of the top brands in the world in SoHo.

Both London and New York are easy to get to because they are such big hubs for international travel. You can easily get anywhere in the world from either city.

New York has two large airports and one in New Jersey that is considered part of the airport scene there. The airports in New York have a variety of lounges and restaurant options. You will not be bored if you have a layover.

The downside to New York airports is getting into the city. It is difficult to get into the city from any of the airports. Public transport takes forever and a taxi is expensive.

The best route? Grab a seat on this shuttle. If you use our link you’ll automatically save.

London Heathrow is the largest airport in London with the most international destinations. The airport is clean, friendly, and cheap to travel around Europe from. The best part is the train into the city. It is quick and clean and so easy.

The Heathrow Express is around 50 pounds and only shaves off about 15 minutes of travel time.

What to consider before visiting London or New York

Making your money last. New York is on the US dollar, which is less expensive than traveling to London on the British Pound (one of the strongest currencies in the world).

If you like to shop and go out to dinner, it might be more affordable to visit New York.

Traveling to nearby cities. If you want to explore more than one city, London is your best bet.

It is easy and affordable to visit Great Britain from London – most trains or flights to Scotland, Wales, or outer England run on a regular basis.

New York is more difficult. The rail system is not as advanced, and flights are more difficult although there are many to choose from.

What do you think? London or New York? It really depends on personal taste and what you want to get out of a city.

via travelers is a modern travel blog providing the best tips, hacks and itineraries to ensure you have an amazing adventure.