Many visitors to Moscow will find themselves at the heart of the Russian capital, in Red Square. This is a great place for people to watch and for taking souvenir pictures with iconic buildings like St. Basil’s Cathedral in the background. However, if you want to see some more interesting architecture from Moscow that is not as well known outside of Russia, it’s worth taking a walk around the city.

Moscow is full of interesting buildings, both old and new. There are many different architectural styles represented, from the traditional Russian Orthodox churches to the more modern glass and steel skyscrapers.

However, one of the most iconic and recognizable buildings in Moscow is St. Basil’s Cathedral.

What is Saint Basil’s Cathedral?

St. Basil’s Cathedral was built between 1555 and 1561 on the orders of Ivan IV. It is located in Moscow’s Red Square. The cathedral is a mix of different styles, including Byzantine, Gothic, and Russian Orthodox. It has nine domes, each representing one of the saints that Ivan the Terrible had canonized.

The cathedral was originally built as a memorial to the Russian victory over the Tatars in Kazan. However, it soon became a symbol of the power of the Russian Orthodox Church. It was even used as a prison during the Soviet Union.

Nowadays, St. Basil’s Cathedral is one of the most popular tourist attractions in Moscow and is a symbol of Russian national architecture.

This nearly-psychedelic riot of shapes and colorful domes is more than 450 years old and is now a UNESCO World Heritage Site — but it’s even brighter today than it was back in 1560 when it was completed under the direction of the legendary Ivan the Terrible.

St. Basil’s Cathedral was built to celebrate the victory of Tsar Ivan IV over the Mongols in 1522. The building itself was all white, intended to match the white stone exterior of the nearby Kremlin. Its onion-shaped domes were made of tin and covered with a light gold leaf coating.

Since then the Cathedral has gotten several facelifts. St. Basil’s Cathedral was first remodeled in the 17th century when the bell tower was added and the domes’ gilded covering was replaced with colorful decorations. A second makeover took place in 1860 when the entire structure was painted with the complex designs that visitors see today. 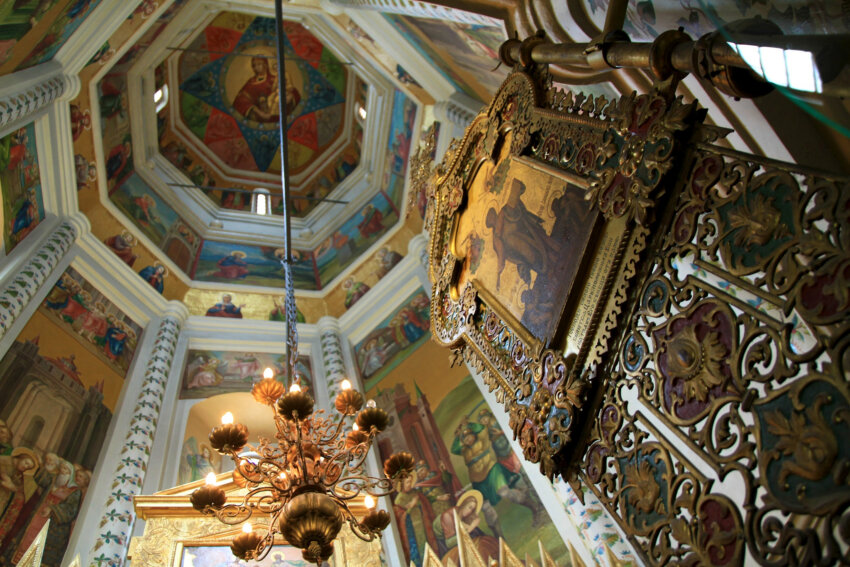 The official name of this Russian icon is The Cathedral of the Intercession of the Virgin by the Moat or Pokrovsky Cathedral.

But it’s been called St. Basil’s Cathedral ever since it was built, in honor of St. Basil the Blessed, whose body is enshrined in a splendid silver casket in his chapel beneath the cathedral floor.

See Related: The Thrilling Beauty of the Preikestolen

The architecture and artwork of the Cathedral of Saint Basil are quite diverse. The cathedral contains oil paintings and frescoes, as well as portraits and landscape paintings. Labyrinths of vaulted interior passageways and galleries connect the chapel.

The St. Basil Cathedral is unlike anything else in Russia due to its unique design. It has nine onion-domed towers that elicit joyful pleasure.

The walls are adorned with carved Kokoschka, which soar over the windows and are interspersed with overlapping layers of embroidered florals. Decorative tiles and geometric designs line the roof and staircase. The austere red-white façade of St Basil’s cathedral did not correspond to today’s colorful riot.

Saint Mary Basil’s chapel has yellow and green triangle domes, as well. The book honors Saint Varlaam Khitynsky, a saint venerated by both Emperors IV and his father as a protector saint. Saints Day is observed on November 6 to commemorate Ivnikov’s triumphant return to Russia in 1553.

The iconostasis is decorated with paintings from the 15th to 18th centuries, each of which is particularly beautiful. The Vision of the Sexton of Tara, a huge hanging painting depicting a foretelling of many disasters that would strike Novgorod, is one of the most magnificent. Because it was the first work to depict the city as towering over everything in Red Square, the massive walled fortress known as the Kremlin is both the symbol of Russian power and the home of its president.

The second chapel is dedicated to Boris and Gleb, the two first Christian martyrs of Russia, who were brothers of Prince Vladimir. One interesting note about this chapel is that there are no crosses on the onion domes. This was most likely due to the fact that at the time of its construction, Orthodoxyaints Peter and Paul

The third chapel is the Chapel of Saints Peter and Paul. The chapels iconostasis was created in the 17th century and features paintings by Simon Ushakov, considered to be one of the greatest Russian icon painters of his time.

See Related: Visiting the Sedlec Ossuary in the Czech Republic

As you might guess, a 450-year-old building has a lot of stories surrounding it — some true, some not. The most popular legend about St. Basil’s Cathedral is that Ivan the Terrible had his architects blinded when the cathedral was finished, so they could never again create something so wonderful. This story is absolutely untrue. 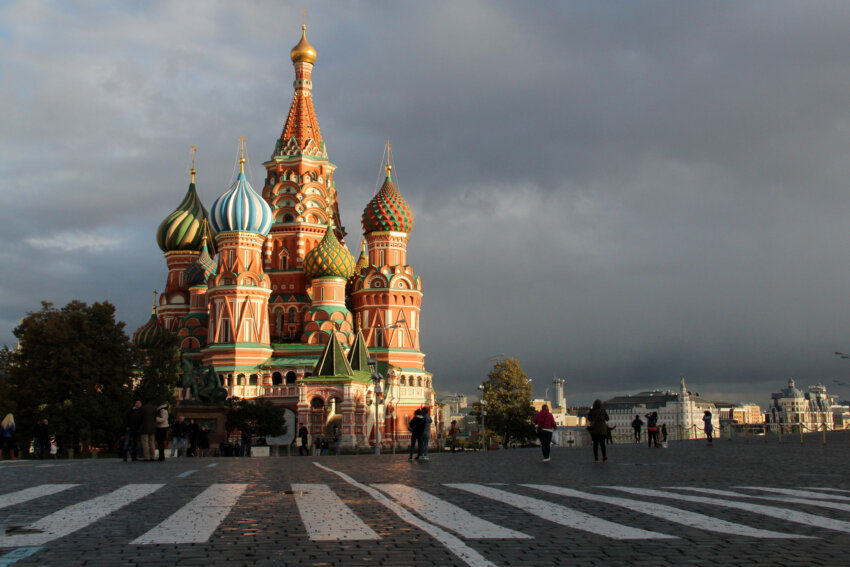 There are also stories about the Saint Basil Cathedral narrowly escaping destruction. Legend has it that Napoleon attempted to burn St. Basil’s Cathedral down, but it was miraculously saved when the fire was extinguished by a sudden rainstorm.

This one probably isn’t true, either — although Napoleon apparently did use the cathedral as a stable for his horses.

However, it is true that Joseph Stalin planned to tear St. Basil’s down in order to make Red Square a bigger venue for political demonstrations during the Soviet Union.

And a little controversy with St. Basil’s Cathedral

At first glance, St. Basil’s Cathedral seems to be a chaotic structure — but it was definitely built with an asymmetrical plan in mind. It’s the thought behind the plan that has puzzled students of architecture for centuries.

Some experts will tell you that the configuration of a central church surrounded by eight chapels is a nod to the important medieval symbol, the eight-pointed star. Some insist that the structure was designed to honor the churches of Old Jerusalem.

Others have a more interesting interpretation: that St. Basil’s eight domed chapels are a reminder of the eight assaults Ivan the Terrible’s armies made on the Mongol forces at Kazan.

Whichever interpretation you like best, St. Basil’s Cathedral is clearly a wild mashup of Eastern and Western architectural styles — although once again, there’s a lot of disagreement as to exactly what those styles are. 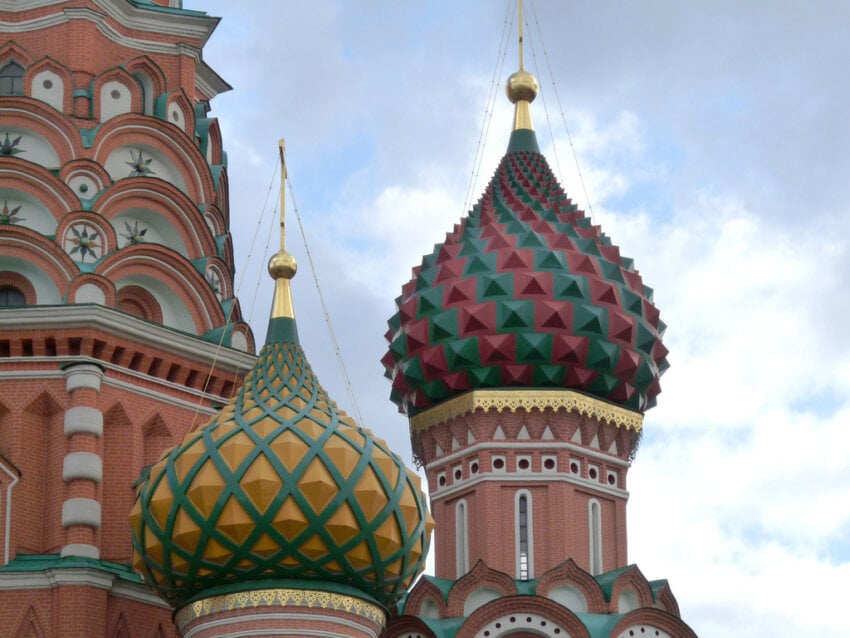 Some experts have called St. Basil’s Cathedral the culmination of the old traditional Russian Orthodox church. Others see in its unique construction echoes of the Italian Renaissance, or of similar design trends in Renaissance Germany. The only point everyone agrees on is that St. Basil’s incorporates a lot of the shape and style of an Islamic mosque.

The controversies surrounding St. Basil’s even extend to the millions of tourists who photograph it every year.

Whether they think St. Basil’s Cathedral is a sacred icon of Russia’s religious past or they think it looks like it belongs inside a snow globe, everybody’s got to agree on one thing: it’s without a doubt the coolest, kookiest landmark in Russia.

St. Basil’s Cathedral, located in Moscow, is an architectural masterpiece and one of the best-known buildings in Russia. The cathedral, which was commissioned by Ivan the Terrible and completed in 1561, features a unique design that has been copied numerous times.

St. Basil’s Cathedral is an important symbol of Russian history and culture and is a must-see for any visitor to Moscow.

The cathedral is named for Saint Basil the Blessed, a Russian hermit who was canonized in 1588. Legend has it that Ivan the Terrible had the architect of Saint Basil’s Cathedral killed so that he could never build anything as beautiful again.

The architecture of St. Basil’s Cathedral

St. Basil’s, one of the world’s greatest buildings, is a stunning architectural accomplishment that became the defining moment in Russian National Architectural history. The initial plan is unknown, and the debate continues.

The cathedral has eight churches around it, with the Church of Intercession and the tenth chapel built over the tomb yard in 1588. The structure is made of white stone, while each temple is constructed of red brick. Wooden walls are seen behind a stone wall.

Red bricks were popular construction material during the Terrible Time for several fortresses and the tomb of Saint Basil, the cathedral’s namesake.

The architecture of St. Basil’s Cathedral is very complex. The outside is decorated with many intricate designs and patterns. The inside is just as ornate, with beautiful paintings and mosaics covering the walls and ceilings.

The cathedral is full of symbolism. For example, the nine domes represent the nine saints that Ivan the Terrible had canonized.

Ivan IV had each of the nine churches constructed in his honor, each with its own distinct form but all featuring onion-shaped domes and two-story rooftop galleries.

Where is St. Basil’s Cathedral?

St. Basil’s Cathedral is located in the Red Square of Moscow, Russia.

When was St. Basil’s Cathedral built?

How many chapels does St. Basil’s Cathedral have?

There are nine chapels in total, each dedicated to a different saint. The height of the cathedral is approximately 81 meters (266 feet).