Amsterdam vs Copenhagen, which is the best place to be? With all their similarities, it might be hard for you to choose. But with the differences below, this can be quite easier for you.

Choosing a vacation destination is sometimes a tricky task. This is especially when you have to choose between two incredible places.

Fortunately, there are always unique things that make people prefer one place over the other. Consequently, how a place is rated depends entirely on a person’s interests and preferences.

For this reason, if you’re having a hard time choosing between several destinations, proper information about these locations can significantly help you make the right choice. For instance, if you are looking at Amsterdam vs Copenhagen, you need to have the full information of the two cities, for you to make an informed choice.

But, there is no need to worry. If you desire to visit Copenhagen or Amsterdam, this article offers you everything you’ll need to know about the two cities.

This way, making that choice won’t be that hard.

Everything You Should Know About Amsterdam and Copenhagen

These two cities are incredible holiday destinations. Whether you’re planning for your engagement, honeymoon, or just a normal vacation, both cities have more than enough to offer. But, if you can’t make up your mind between visiting Copenhagen and Amsterdam, here are several facts about the cities to make it easier.

Amsterdam city rooted in deep culture and artwork. The city consists of numerous museums spread out in the entire town.

From the Van Gogh Museum, which is among the most visited sites in the entire nation, to Stedelijk Museum and Rijksmuseum, Dutch history and art are well preserved.

Here are some of the best tours in Amsterdam.

So, if you’re an art lover, you’ll have your hands full for around 3 to 4 days for you to see all the art and history you desire. And for those who adore music, you can never get enough of the city’s variety.

You will have quite a treat of the best music ranging from their local SKA bands to their international superstars and DJs.

Copenhagen, just like Amsterdam, is rich in art and culture. A friend once told me that if you throw a stone from any point in the city, you’ll most certainly hit a bike or a statue. As funny as that may sound, it’s almost true.

You will find numerous bronze statues almost everywhere in the city. These are dedicated to mariners, royalty, or artists.

One of the most famous bronze statues is the “The Little Mermaid” by Hans Christian Andersen. If you visit Copenhagen, make sure to check it out.

Just as mentioned earlier, these two cities have more commonalities than you can imagine. Although the main language in Amsterdam is Dutch and that in Copenhagen is Danish, they both have roots from the same place. Both languages are Germanic.

The difference is that Dutch is West Germanic, whereas Danish is North Germanic. But, despite having a similar origin, if you only speak one of them, let say Dutch, you can’t understand Danish, and vice versa.

One thing that makes the two cities seem almost similar is their riding culture. Both cities can be easily referred to as biking cities. And almost everyone here rides a bike either to work or for their daily activities.

In fact, a taxi driver on my first visit to Copenhagen reiterated that more than half the city’s population uses bikes to commute to work. This was after he saw my reaction to the numerous bikes in the town. The amusing thing is, in Amsterdam, the statistics are no different.

Research published on Denmark’s website shows that around 90 percent of Denmark’s population, owns a bike.  The two countries (Denmark and The Netherlands) are among the top countries with the highest number of bicycles per capita.

For this reason, the two nations are keen on improving their infrastructure to cater to the number of bikes. The extensive system of bike lanes, as well as parking spaces for bikes, shows how much biking is honored in these two cities.

These estimates on Copenhagen vs Amsterdam population show just how close the two cities are in almost every aspect.

The two cities are the capitals of two nations found in Europe, along the North Sea.

The distance between the two nations is only around 900 miles. And, only one country lies between their two capitals – Germany. 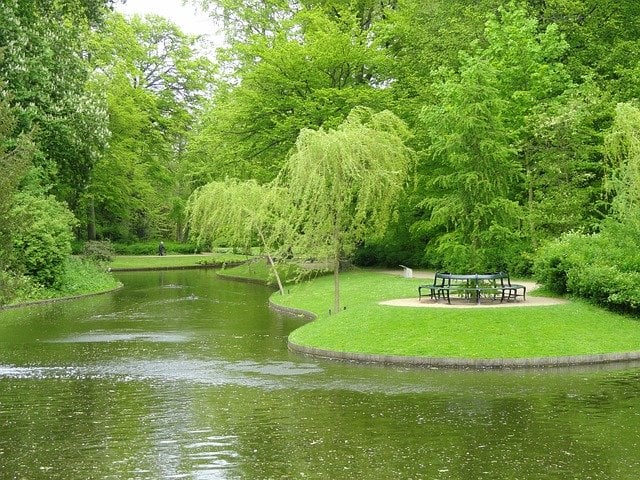 Amsterdam city is located around 4 degrees latitude south of Copenhagen. On average, the city experiences more rain than Copenhagen does throughout the year.

The summers here are generally warm and a bit cloudy while the winters are long, cloudy, and cold. The temperatures in Amsterdam range between 38.5 °F and 62.5 °F.

Copenhagen, on the other hand, enjoys warm days during summers, although it experiences cold nights and winter. The summers here are warm but partly cloudy.

The winters are mostly cloudy, windy, and quite cold — the temperatures in the city range between 29°F and 71°F.

Although the weather in Copenhagen can sometimes be harsh, it isn’t as miserable as many would think. Their summers have relatively good weather and hence the best time to visit the city. Also, during autumn and late spring, the weather is also friendly for visits.

There are two ideal seasons when you can visit Copenhagen, based on what you’re looking for. These are between March and May, or from June to August. The warmer seasons in the city brings various large scale events that you’ll enjoy.

In Amsterdam, the summer offers the best weather. However, the city flocks with tourists from all over the world during this time.

This makes spring the best time to visit Amsterdam, especially for those who don’t want to encounter the high tourist season.

In fact, you can enjoy the beautiful view of tulips at Keukenhof in April, or catch the King’s Day festival. The best months to plan for a trip to Amsterdam are, therefore, in April, May, and September.

However, if you want to be there during the tourist pick period, then March is the month for you.

Whereas Copenhagen is popular for its Carlsberg Brewery, Heineken Brewery is what Amsterdam is popular for. The two flagship beers are made of 5% alcohol and even packed in a green bottle, which is quite similar.

These two breweries also offer tours for those who want to experience how these great beer brands are made. And, although I haven’t visited any of the breweries, I must make sure that I do, on my next visit to either of the cities.

And, whether you are in a pub or a restaurant, you can get a taste of these local brands in both cities. 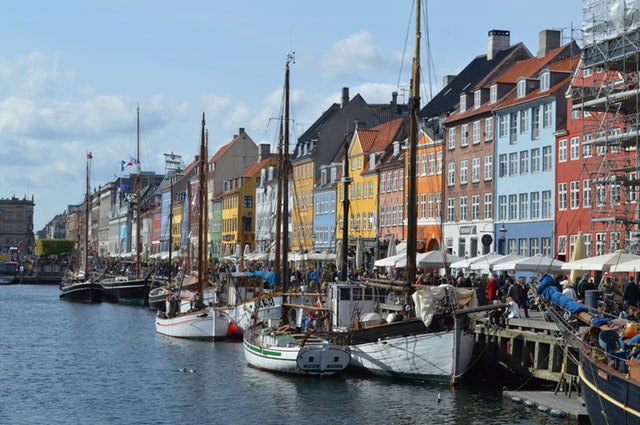 In Amsterdam, transportation in the city mainly consists of public transport and bicycles. Around the city, there are large freeways that help to connect Amsterdam to other cities. These freeways end right before the A10 Ringroad.

If you want to maneuver easily within the city, bikes and public transport is encouraged. The use of personal vehicles is being discouraged by the government in the city.

Amsterdam is popular for the biking culture, as most people in the city commute using bikes. The city is regarded as the most bike-friendly city globally.

Water transport is also very common in the city. This is due to the extensive canals network (150 in total) that crisscrosses the entire city.

In Copenhagen, public transport is quite reliable and efficient. The Metro, s-trains, as well as buses, are all easily accessible with a similar ticket. The only thing that you need to note is the number of zones you have to pass on your journey.

The journey from the airport to the city is around twelve minutes, and you can use any of the transportation modes.

If you want to move from Copenhagen to Amsterdam, the distance between the cities is around 386 miles.

And you can travel by air, train, bus, or even drive yourself. The same is also applicable when moving from Amsterdam to Copenhagen.

Both cities have their unique features and traits that appeal differently to various people. So, when deciding on which city to visit, it entirely depends on what you consider attractive to you.

But, if you have a tight budget, I would recommend you go with Amsterdam over Copenhagen.

The Netherlands capital has a much lower VAT of 19%, in comparison to 25% in Copenhagen. This means that Copenhagen is much costly to live in than Amsterdam.

Also, if you are traveling as a family, Amsterdam also takes the day. Although known for its shabbier lifestyle, the city is also referred to as the children’s paradise. It offers various museums, parks, and safe kids’ entertainment.

There are plenty of things to do in Amsterdam to fill your time. No matter who you are traveling with.

See related: Why is everyone obsessed with travel?

Amsterdam boasts of being an international city, with an incredibly diverse population.

The city’s population consists of individuals from over 180 backgrounds, which makes the city a center of diverse arts and culture. This means that you will hear more languages than just Dutch and English.

The people in Amsterdam are quite friendly and are known to be welcoming and open to foreigners. When it comes to communication, a large population here converses in English.

And, the natives are known not to tolerate broken Dutch.

So, if you try speaking in broken Dutch, you’ll be met with an English response.

A recent report by the UN, declared Denmark to be the happiest country globally. The people in Copenhagen are, therefore, quite warm and welcoming. They are also known to love the outdoors during spring.

When winter falls, the people here use candles to light up their houses, creating a cozy atmosphere. They are modern, heavily invested in green technology, and an independent group of people.

The people in Copenhagen celebrate multiple festivals, including religious and cultural ones such as “the Queer Pride and the Annual Jazz Music Festival.”

Conclusion on Amsterdam vs Copenhagen

Amsterdam vs Copenhagen- these two cities are incredible places to visit, whether on vacation or a business trip. And, although Copenhagen might seem a bit expensive to visit, it has its qualities that outweigh this cost.

If you are in the process of planning a trip to either of the two cities, this article offers all the facts you need to know about them.

This way you can easily see which city is ideal for you.