Festivals are a great way to see and experience the true cultural experience of a city and/or culture. We evaluate the best festivals in the Philippines you need to see.

The 10 Best Festivals in the Philippines

Filipinos love to party. With celebrations for almost anything you can think of, the itch to throw a fete is deeply ingrained in our culture.

Did you know that there’s a fiesta happening in the Philippines every month of the year? There are approximately 42,000 major and minor festivals in the country, a majority of which are held in a barangay (village) level.

Travelers looking for a day of merriment, an escape from urban life, or the occasional debauchery will not be disappointed.

Most of the festivals in the Philippines are traditionally rooted in Christianity, and rightfully so. Being under Spanish colonial rule for more than 500 years has largely shaped our festival scene – from celebrating the life of Saints to honoring baby Jesus.

These festivals were instrumental in spreading Christianity throughout the locality. Other festivals are held to commemorate significant historical events or honor seasons, such as seasons of harvest or paying tribute to the survivors of a tragic earthquake.

Contrary to what you might believe, most Philippine festivals are not the quiet and meditative kind. They are often celebrated with loud music, frenzied dancing, outrageous costumes, feasts, and lots of alcohol. To get everyone involved, peryas, or trade fairs, with make-shift temporary amusement parks are usually set up.

A variety of events can happen in a Filipino festival but you can expect processions, Holy Masses, parades, exhibits, trade fairs, pageants, concerts, religious and cultural rituals, as well as plays and reenactments.

For local revelers, some of these festivals are a big thing. So important are these fiestas for some Filipinos that they mark their whole year around a particular celebration.

Sinulog, a festival in Cebu held every January, for example, draws around 2 million people each year. It’s something that you must include in your Philippines itinerary if you are traveling during this time.

The MassKara Festival in Bacolod is flocked by 3 million people annually. With thousands of fests in the Philippines, how do you know which ones are worth attending? Here’s a definitive list of the 10 most famous festivals in the Philippines.

Date: Every third week of January

The Sinulog Festival in Cebu City is one of the grandest festivals in the country. The famous celebration is held to honor the Santo Nino (the Holy Child Jesus), the patron saint of the City. In a nutshell, the Sinulog is a dance ritual that marks the Filipino’s pagan past and its transition to Christianity.

When it comes to eye candy, it’s hard to beat the pomp and pageantry that happens in Sinulog. Parade participants are all decked out in outrageous multi-colored costumes and dance to drums, native gongs, and trumpets. Streets are flanked from end to end with food and souvenir vendors, as well as onlookers raring for a glimpse of the spectacular performances.

Aside from the dancing and street parties, the Sinulog Festival also hosts the SME trade fair where Cebu export products are sold. If you’re looking for just one festival to attend,  Sinulog should definitely be on your list.

See Related: Best Ways to Zipline in the Phillippines 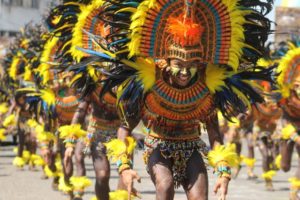 Date: Every fourth weekend of January

If Sinulog is one of the most globally-renowned festivals in the Philippines, then Dinagyang is probably the most attended. “Dinagyang” is the Ilonggo term for merrymaking or revelry, and true to its name, the festival is one of the biggest world-class festivals in the country hosting a variety of different events. The celebration is held to once again commemorate the Santo Nino, or the Holy Child Jesus, and to celebrate the arrival of Malay settlers in the city.

There are a lot to see and a plethora of events to attend. The festival is a city-wide effort, so all schools and local institutions participate in making the event remarkable for visitors.

The most popular event is the Dagyang Tribes Dance Competition. Here, Ilonggo tribes are smeared in body-paint, present a tableau of folkloric scenarios, and parade throughout the city while dancing, donning props, and wearing outrageous costumes. 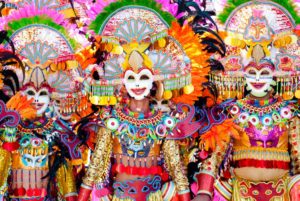 Bacolod isn’t called the City of Smiles for nothing. People here are a fun-loving bunch, and the city’s biggest festival reflects that. Attended by around 3 million people around the world, annually, the Masskara Festival is 20 twenty days of non-stop street-dancing, drinking, and merrymaking. The festival began in 1980 during a period of agricultural crisis as a means for escapism.

The word Masskara is derived from the Filipino word mascara, which means mask. In the festival, dancers, performers, and onlookers are all encouraged to wear a smiling mask (a nod to Bacolod being the “City of Smiles”). Historically, the masks were Filipino-inspired and featured ornate hand-painted details, flowers, and feathers. Today, the masks are more influenced by the Rio Carnival or the Carnival of Venice with plastic beads and sequins.

Expect a variety of events like dance competitions, parades, pageants, food festivals, concerts, garden shows, trade fairs, bugle corps competitions, and carnivals. The Electric Masskara is one of the festival’s most popular events, featuring floats equipped with lights and music. Here are some of the best exotic street foods in the Philippines. 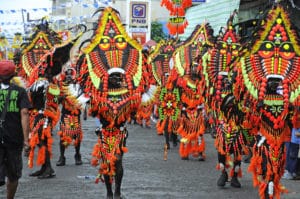 Date: The Third Sunday of January

The Ati-Atihan Festival in Aklan is the oldest festival in the Philippines, which has earned it the distinction of being “The Mother of all Philippine Festivals”. As the country’s first festival, the event is said to have inspired most of the Philippines’ festivals including the Sinulog and Dinagyang. The name Ati-Atihan is derived from the Ati-people: short, dark-skinned, and frizzy-haired. Celebrated for over 800 years, the festival is held in honor of the Holy Child Jesus.

It is worthwhile to note that while the festival is pagan in origin, it was the Spanish that turned the celebration into Christian event.

The festival is a week-long event of street parties and dancing competitions. Unlike other festivals in the Philippines where onlookers are limited to staying at the sidelines, anyone can jump into the parade and bust a move with the performers!

Surviving Ati-Atihan is all about knowing how to save your energy. There’s lots of booze, food, and dancing, and the weeklong event can be draining for the uninitiated! 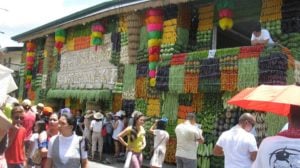 Nothing puts a spotlight on Filipino creativity more than the Pahiyas Festival, a harvest celebration held annually in May. The word “Pahiyas” means to decorate, a fitting name for the festival’s ultimate goal – to see which house in the neighborhood is best decorated with farm produce like vegetables, fruits, and kiping (a type of wafer made with rice and food coloring).

The modernized Pahiyas festival is less religious and more pomp and pageantry. Apart from the house decorating competition, the festival also hosts contests, exhibits, parades, and various cultural shows. All of these are aimed towards putting a spotlight on Lucban’s thriving tourism industry.

Date: During the Holy Week in March or April

In Pinagbenga, you’re going to see more flowers in a day than you would in a lifetime. Named after the Kankanaey term that means “season of blooming”, the festival highlights the traditions, values, and history of Baguio and the Cordilleras. It is also a tribute to Baguio’s thriving flower plantations and its rise from the 1990 Luzon earthquake.

Lasting over a month-long, this festival is one of the longest in the Philippines.

For travelers looking for Instagram-worthy photos, the festival is a feast for the eyes.  As one of the most colorful festivals in the Philippines, you can expect a plethora of vibrant flower-covered floats, lots of street dancing by dancers clothed in flower-themed costumes, and a number of exhibits featuring local products.

The Grand Street Parade, one of the festivals’ most popular highlights, is a dance and costume competition where participants dance to Cordilleran music.

Date: During the Holy Week in March or April

Come to Marinduque during the Holy Week and you’ll be surrounded by a throng of men clad in full Roman armor, complete with breastplates, vibrantly colored tunics, imperial helmets, and spears. No, it’s not Halloween.

You’re in the Moriones Festival, a religious event held every year to commemorate the life of St. Longinus – a centurion who pierced Jesus with a spear as he was hanging on the cross.

According to the bible, Longinus’ faltering sight was healed when some of Jesus’ blood spilled into his eyes. This miracle urged him to convert, causing him to leave the army and serve as a monk in Cappadocia.

The festival’s name is derived from the word “morion” – the helmet of Roman soldiers. The Moriones is a week-long event aimed at re-enacting the search for Longinus and the “Passion of the Christ”. In the festival, throngs of men dressed as Roman military roam the streets and playfully scare children.

Though there’s not much interaction for onlookers, witnessing the reenactments is a treat in itself. This is also the perfect time to explore Marinduque’s beaches, caves, and hot spring resorts! 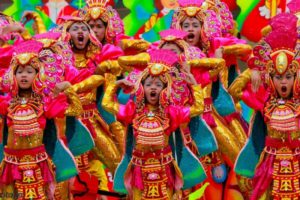 The Pintados-Kasadayan Festival in Tacloban is one of the most anticipated festivals in the city. It was first celebrated in 1987 as a way of showcasing the tattooed tribespeople of Leyte and Samar called the Pintados. It’s one of the most colorful cultural-religious festivals in the country, and for travelers visiting Tacloban in June, it’s a definite inclusion to the itinerary.

The Pintados-Kasadyaan Festival features lots of street dancing where participants were vibrant costumes and ornate body paint that resembles the armor used by tribal warriors. Apart from the parade, the festival community also hosts beauty pageants. 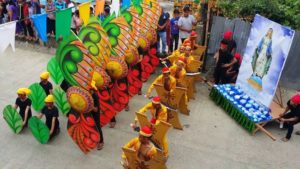 From vibrant warrior costumes to intricate dances, the Sirong Festival in Surigao del Sur is truly an unforgettable experience. Sirong is an ethnic mardi-gras parade aimed at reenacting the battle between Christians and Muslims.

In the history of Cantilan, early Christians led by the Spanish had to defend themselves against Muslim raids, and this is where the festival has derived inspiration.

The festival began in the Municipality of Cantilan in 2004 and was flocked to by various people from the neighboring Surigao municipalities. The festival is essentially one big dance competition, with each contingent reaching at least a hundred costumed performers.

The winner takes home a huge cash prize, but if you aren’t performing, staying at the sidelines and watching the events unfold is worth the visit!

Date: The weekend before Christmas Eve

Trust in San Fernando, the Christmas Capital of the Philippines, to throw one of the biggest Christmas-themed festivals in the country. The Giant Lantern Festival is an event that revolves around a lantern-making competition. In this event, participants are encouraged to craft up to 15-foot diameter giant Christmas Lanterns with one rule: each lantern must be crafted from only local materials.

Residents of each barrio volunteer to contribute to its creation, from the design to sourcing its materials and providing labor. As the years go by, the lanterns become bigger and more intricate in design. Once all lanterns have been made, they are paraded around each barrio on Christmas Eve.

Joshua Lagandaon is a writer from the Philippines. He has been writing professionally for more than a decade after taking a Creative Writing degree at the Philippines' prestigious Ateneo de Manila University. He writes for local travel, fashion, and lifestyle magazines while dabbling in theater and the arts.