The flag of Germany is a horizontal tricolor consisting of three equal bands of black, red, and gold. The flag was first adopted as the national flag of modern Germany in 1919, during the Weimar Republic period. Here we will provide additional insight into the meaning, color scheme, and history of the flag of Germany.

The Use of the German National and State Flags

The flag of Germany is tricolored and consists of three equal horizontal bands that display the country’s national colors of black, red, and gold. The tricolor flag is used to illustrate the continuity between the Weimar Republic and the new German state.

Origins of the Germany Flag 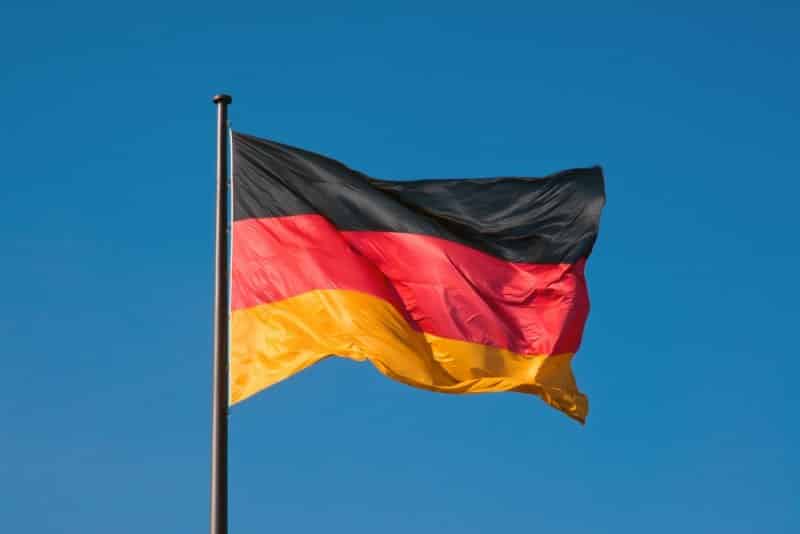 There are several theories regarding the origins of this color scheme and its inherent meaning.

History of the Flag of Germany

The first theory holds that the black and gold combination relates to the colors on the semi-official coat of arms of the Holy Roman Empire.

These two colors would find their way into the flag of the Austrian Empire, created in 1804 by the last ruler of the Holy Roman Empire, Francis II.

Within two years, and following Napoleon’s victory over Austria at Austerlitz, the Holy Roman Empire ceased to exist. From that time onward, the two colors would be closely associated with Austria’s Habsburg Dynasty, which appropriately became known as the “Black and Gold Monarchy.”

The German relation to black and gold surfaced in the radical 1840s when the black-red-gold flag was used to symbolize the movement against the Conservative European Order established after Napoleon’s defeat.

The area is known today as Germany was carved into a loosely-knit German Confederation, and republicanism was suppressed. This system preserved peace and maintained order in Europe, smothering the nationalist and liberal tendencies brought to life during the Napoleonic Era.

Only after harsh economic conditions struck in the 1840s did the radicals and nationalists get their chance to usher in change. During the Springtime of the Peoples, radicals took power, and a National Assembly was finally formulated after serious deliberation.

Nevertheless, the movement fell apart within a year. As the economy leveled out, radicals lost support, and monarchists regained power.

Also, internal disputes and numerous disagreements plagued the new government, although it had succeeded in drafting a constitution that declared “Basic Rights for the German People.”

Still, the liberals failed in their efforts to create what is often referred to as a “Greater Germany.”

The Frankfurt Parliament had declared the black-red-gold as the official colors of the German Confederation, with the red in the tricolor most likely a referencing the Hanseatic League and the gold and black symbolizing Austria, as its Empire, considered to be “German,” had an influence over (what would become) southern Germany.

There are many theories in circulation regarding the origins of the color scheme utilized in the 1848 flag. It has been proposed that the colors were those of the Jena Student’s League, one of the radically-minded Burschenschaften banned by Metternich in the Carlsbad Decrees.

Another claim goes back to the uniforms (mainly black with red facings and gold buttons) of the Lützow Free Corps, comprised mostly of university students and formed during the struggle against the occupying forces of Napoleon.

Mid-19th Century History of the Flag of Germany

It is during the mid-nineteenth century that red became synonymous with revolution and Karl Marx’s socialist vision.

Whatever the true explanation, these colors soon came to be regarded as the national colors of Germany during this brief period, and especially after their reintroduction during the Weimar period, they have become synonymous with liberalism in general.

There are a number of reasons why the Revolutions of 1848 failed.

Conservatives, such as the Junker class, emerged as the winners.

There were other factors involved, including Prussia’s startling growth, which, coupled with Austria’s gradual decline, increased the frequency of power-play politics in Central Europe. Still, it was Prussia’s Friedrich Wilhelm IV – not the Austrians – who rejected the proposal to become Emperor of the Frankfurt liberals’ Germany.

At the same time, Austria’s status as a multiethnic empire complicated the dream of a united Greater Germany – the grossdeutsch solution. Eventually, Prussian leadership, largely influenced by Otto von Bismarck, settled for a Germany that excluded Austria.

An important step towards this kleindeutsch solution was the Austro-Prussian War in 1866. Interestingly, the South-German States aligned with Austria, including Bavaria, Baden, and Württemberg, are said to have flown the black-red-gold flag, further illustrating the distinctions between the present-day color scheme and the northern, Prussian tradition.

On June 25 of that year, the coalition adopted a flag that blended the colors of its largest and smallest member Prussia (black and white) and the Hanseatic League (red and white), into a new black-white-red (Schwarz-Weisse-rot) horizontal tricolor.

This flag would also be the national flag for the subsequent German Empire from 1871 to 1918, which finally replaced the German Confederation.

Following Germany’s defeat in World War I, this Imperial flag fell into disuse, and the new Weimar Republic officially reinstated the black-red-gold sequence on August 11, 1919.

Throughout the days of the Weimar Republic, there was a debate on which flag to use, causing strong controversy, with monarchists and conservatives in favor of re-adopting the black-white-red flag.

In 1926 the old black-white-red flag was once more admitted to use, but only for Germany’s diplomatic missions overseas.

Post-Nazi History of the Flag of Germany

When the Nazis came to power in 1933, the black-red-gold flag was entirely removed and replaced with the black-white-red. However, on September 15, 1935, they would replace virtually all German governmental flags with designs based on the swastika flag that had been their party flag.

It featured the same colors as the Imperial flag, but it was arranged as a red flag with a white disk in the center containing a black swastika.

After the defeat of Germany in World War II, Germany was occupied by the Allies. The Allied Control Council banished the existing national flags and issued a humiliating order designating the international signal pennant representing the letter “C” (minus a triangular cutout) as the provisional civil ensign of Germany: “C” stood for Capitulation.

The Council stated that this “C-Pennant” (German, C-Doppelstander) “shall not be honored, and shall not be dipped as a salute to war and merchant ships of whichever nation.”

After some debate, the black-red-gold flag was again adopted as the federal flag for the Federal Republic of Germany (West Germany) on May 9, 1949.

The German Democratic Republic (East Germany) had initially used the same flag. Still, on October 1, 1959, it introduced a communist emblem to the center of the flag: a hammer (symbolizing the workers) and a pair of compasses (symbolizing the intellectuals) inside ears of grain (symbolizing the farmers).

This remained almost until the territory of the former GDR was reunified with the Federal Republic of Germany in 1990 (the GDR formally removed the emblem shortly before reunification).

The flag of the GDR was banned, and any use of it was considered a criminal offense in West Germany during much of the Cold War.

See Related: How Did Germany Become an Industrial Giant?

As you can see, South, West, and East Germany had their own flags after the Austro-Prussian War in the 19th-Century. The black, red, and gold flag was flown per Prussian tradition in the North and made sure there was a clear distinction between the present-day color scheme of the flag.

The alliance then began using a flag that ultimately blended the three colors of the regions.

The largest and smallest territories used black and white as their colors, while the Hanseatic League’s colors were white and red. These colors combined to create the black, white, and red horizontal tricolored flag used in the German Empire between 1871 and 1918.

Many countries have their own variations of the national flag, and Germany is no exception. The tricolored flag of Germany is used as the civil flag and civil ensign.

It is also commonly used by authorities to show they have a connection to the federal government.

The German government flag was introduced in 1950. It is a civil flag that has been defaced and features the federal shield with black and gold bands overlay. The Federal Shield is a coat of arms of Germany variant. You will notice that it has a rounded base while the standard coat of arms is actually pointed.

This flag may only be flown by the government. If it is used without permission, the offense is punishable with a fine.

Germany also flies horizontal flags over public buildings like the town hall. So, it is not uncommon in Germany to see two flags raised at the same time. Most of these flags have a vertical flag design that was established in 1996.

In Germany, you will find that there are very different uses when it comes to the public use of their flags and national symbols. Official authorities primarily use the German flag during special occasions. It can also be used publicly during sports events.

Flag days are saved for election time, and other state-specific flag days there may in other states. When flying flags in Germany on flag days, you will find that they are flown at half-mast, and no vertical flags are lowered.

So, the meaning of the Germany flag?

The flag’s three colored bands – the black red gold flag – represent their national colors. These national colors date back to the republic democracy that was proposed in the mid-1800s. Under this democracy, the colors symbolized German unity and freedom for Germany. During the Weimar Republic, the colors represented the centrist, democratic and republican parties.

To learn more about the meaning of Germany flag, you need to understand its history.