Looking for a great country to visit in Europe? Germany is one of the spectacular countries to see in Europe. The things to do in Germany are undeniably outstanding and a must-see destination not to miss.

An eye-catching country that is blessed with breathtaking picturesque sceneries from its landscape of rich forest, panoramic landscapes and mountains, and ancient towns. It is a lovely country rich in history, incredible culture, great beers, and spectacular nightlife—each of its cities and states where Germany’s gems not to miss.

Plan a trip to Germany and see all its best attractions, for we have a list that provides extraordinary journeys in Germany. 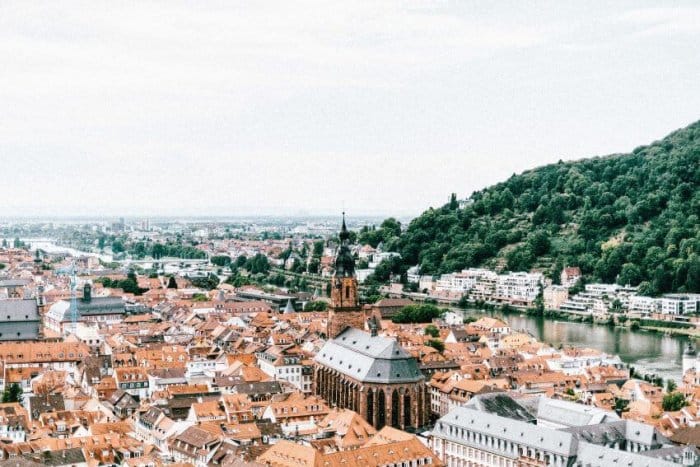 Phantasialand is a privately owned amusement park situated in Bruhnl, North Rhine-Westphalia, Germany. Over one million people troop into the amusement park just in a year.

This is as a result of the attractions it has to it and the wide landscape, too. Phantasialand was established in the year 1967, August 30th precisely, by Gottlieb Foffelhardt and Richard Schmidt.

A fire outbreak occurred in the park in 2001 due to wrong wiring somewhere in the amusement park. This outbreak led to the destruction of some of the park’s tools up to seven million United States dollars. As a result of the outbreak also, near sixty people were injured.

In 2002, Maurer Sohne built two roller coasters (Winja’s Fear and Force). Sohne, around the same time, also developed an area of the park now called Wuze town. In 2006 again, the Black Mamba roller coaster (which represents the African culture) was also introduced to the park.

In 2004, a hotel designed to resemble a Chinese cultural setting was raised in the park, having two restaurants: the Lu Chi and Matamba. Talocan, a topspin, was built in the park in 2007 by Huss Maschinenfabrik.

In this manner, Phantasialand has a whole hand full of discoveries too, themed to represent one cultural heritage or the other: Berlin, Mexico, China Town, Klugheim, etc.

There are a handful of wonderful sights in the park, many of which give the park the look of a fantasy space. Attractions to the amusement park include:
(a) Theme areas
(b) Roller coasters
(c) Water rides
(d) Thrill rides
(e) Dark rides
(f) Ballonfahrt
(g) Autoscooter
(h) Condor
(i) Crazy loop
(j) Galaxis-360
(k) Gebirgsbahn
(l) Yeti
(m) Wosi’s Abenteurpark, etc.
So many, many attractions are in this park, and we cannot name them all here.

See Related: Things to Do in Trier 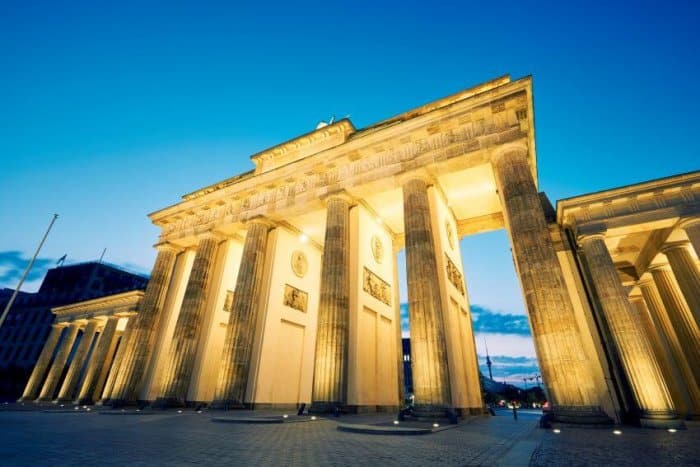 The Brandenburger Tor (German) or Brandenburg Gate (English) is a city gate monument situated in the western part of Berlin. The monument was a product of King Frederick William II’s order and had come through when the temporary restoration of order in the Batavian Revolution.

The city gate was constructed in the Neoclassical style. Construction for the gate began in 1788 and lasted up till 1791. The Brandenburg city gate leads to a linden trees boulevard by the name Unter den Linden. Further down, the Unter den Linden is the royal City Palace, where the Prussian monarchs are housed.

The reason behind King Frederick William II’s commission of the gate was to symbolize peace, hence its former name: Friedenstor, which, translated in English, means Peace-Gate.

Carl Gotthard Langhans designed the city gate. There are a total number of twelve Doric columns found in the city gate, each side having six to itself; hence there are five entry paths through the gate.

The city gate was built to resemble a typical Propylaea. Resting on the head of the gate is the molded image of Johann Gottfried Schadow driven in a chariot by Victoria.

The City Gate is opposite the Parister Platz, which is one of the most attractive squares in the whole of Berlin. It, the city gate, has witnessed many wars and renovations. 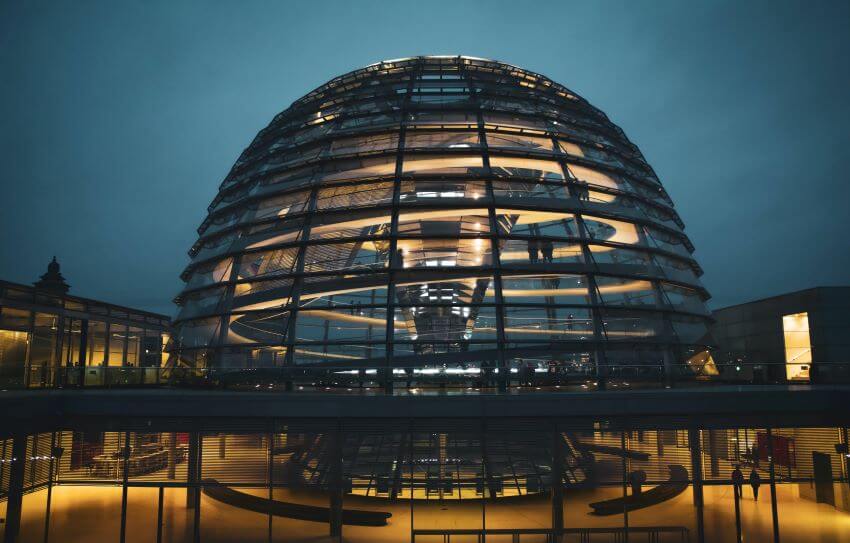 The Reichstag Building, also called Reichstagsgebaude in German, is an edifice situate in Berlin, Germany. The edifice was constructed to be the residence of the German Empire’s Imperial Diet from its construction in 1894 until the year 1933 after a fire attack was made on it.

The construction for the Reichstag Building began in the year 1884 and was completed in 1894, ten years after. It was initially a product of Paul Wallot’s design. Paul Wallot, born on the 26th of June, 1841, was an architect from Germany of Huguenot descent.

Then the World War II of 1944 came, and the building became even more abandoned. However, between the 1960s, movements were made to restore the building to its former glory, but this didn’t seem possible.

It was only in 1990, just past the German reunification, that actually, following a redesign of the structure by Norman Foster that the house actually became rebuilt. Actualization of this took about nine years, and once again, it (the edifice) became the modern Bundestag. Bundestag is the federal parliament of Germany.

There are several attractions to the edifice, beginning from the very structure it. Other attractions are:
(a) The Cyrillic graffiti the Soviet soldiers left behind after they sieged Reichstag in 1945.
(b) The art exhibitions (some permanently mounted) in the arena.
(c) The Kafer Dachgarten Restaurant on the rooftop of Reichstag, where you could get the best meal of your lifetime.
The dome and roof terrace are opened for the public to visit. 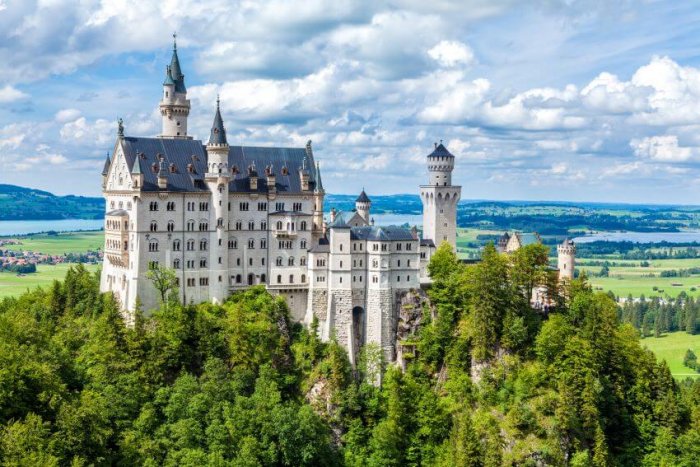 The Neuschwanstein Castle, known in German as Schloss Neuschwanstein, is located in Hohenschwangau, Bavaria, Germany. It is a historical palace of the nineteenth century constructed from the years 1869 to 1886.

The palace was specifically designed to be just the king’s residence, meaning people were not let into it. But briefly, after the king’s passing in 1886, the palace became open to the public, and since then, millions of people have been trooping into the palace for several purposes.

Architect Eduard Riedel was responsible for realizing the design for the palace after Christian Jank’s designed draft on what the building could resemble. And accompanied by the following civil engineers, the structure was able to be raised: Georg von Dollmann and Julius Hofmann.

From the letter King Ludwig wrote to Richard Wagner, he intended for the palace to be built in the old German Knights’ castles style.

The castle did survive the two World Wars, and it is believed that so was the case because of space where the castle is mounted. Some persons described it as a “secluded and strategically unimportant location.”

Today, the castle is open to just everyone, though some restrictions are put into place. For instance, no one can take pictures inside the castle, and no one stays more than thirty-five minutes guided tour. Bring one of these top travel backpacks on your journey to the castle. It’s a longer day trip so you’ll need to pack all the essentials in case you hit any delays in your trip.