It is said that the higher the IQ someone has, the more likely they are to have a fear of flying. For many, the fear of flying is about having a lack of control over their own personal circumstances. After experiencing these runways, however, a healthy fear of flying can easily develop too! With difficult takeoffs, landings, and approaches, you’ll want to make sure that you’ve had enough liquid courage to experience them for yourself!

The Top 9 Airports To Make You Hate Flying: 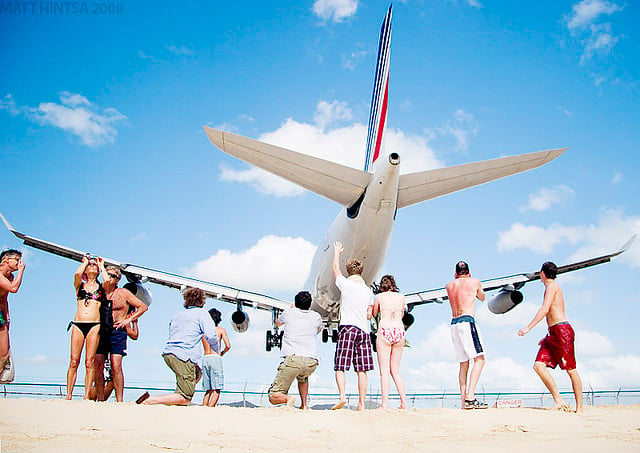 If you want a spectacular landing, then give Princess Juliana International Airport a try. Your airplane will buzz literally feet off of the crystal blue waters of the island. A public beach is in the airport approach pattern, which means once you step off the plane, you can have other planes buzz you as you enjoy some sand and surf! Taking off isn’t a picnic either as it looks like your airplane is going to crash into the water before barely clearing it to climb into the skies. 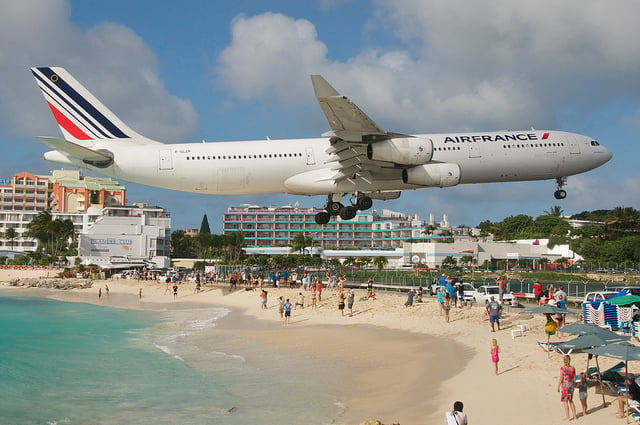 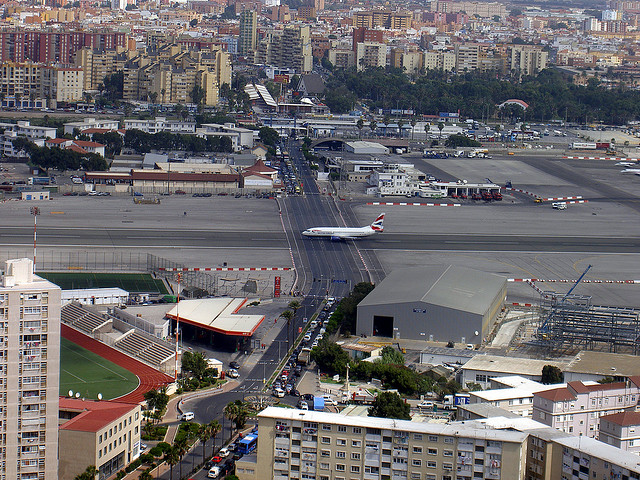 At first glance, the Gibraltar Airport looks like virtually any other airport you’d fly into. That is until you realize that there is a public access road that crosses the runway! It is, in fact, the only road in existence that connects Gibraltar with Spain. The authorities say that they close the road whenever an airplane is about to land. The cars are literally just feet away from the aircraft and you can see them crossing the runway when your plane is on approach!

If you’ve ever wondered whether or not an airplane can outrace a car in a drag race, this airport is the best place to find out the answer to your question.

Must Read: 8 Best Airports to Have Connecting Flights In 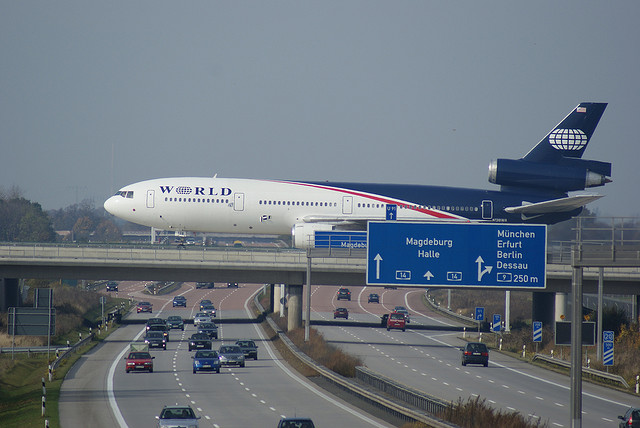 Have you ever heard of landing an airplane on a bridge? Would you be willing to drive under that bridge when an airplane is landing? At this airport, the takeoffs and landings are all pretty normal with the exception that the airport itself is built up above a highway. Six bridges in total support the jets that use this airport, and in the past that even included the Concorde jets.

One thing is for certain – you will never look at an overpass in the same way again! 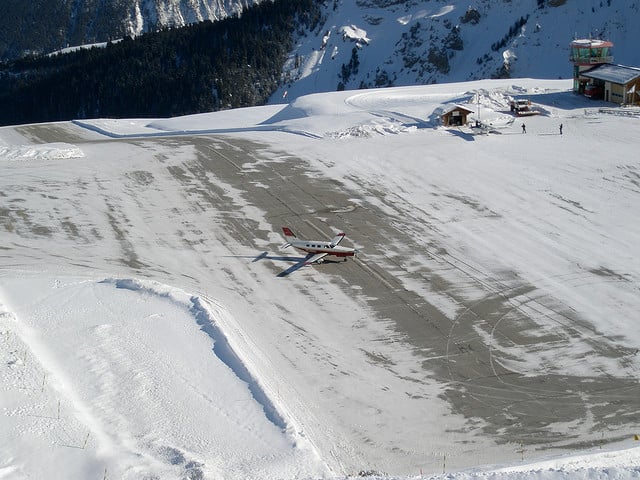 Located in a popular skiing area of the French Alps, the runway of this airport is one of the shortest there is that is capable of supporting commercial airline traffic at just 525 meters in length. The fun doesn’t stop there because the runway itself is uphill, not flat, making it difficult to judge the landing angles correctly. Oh – and it doesn’t have any instrumentation assistance, meaning that you have to land the airplane by sight alone. 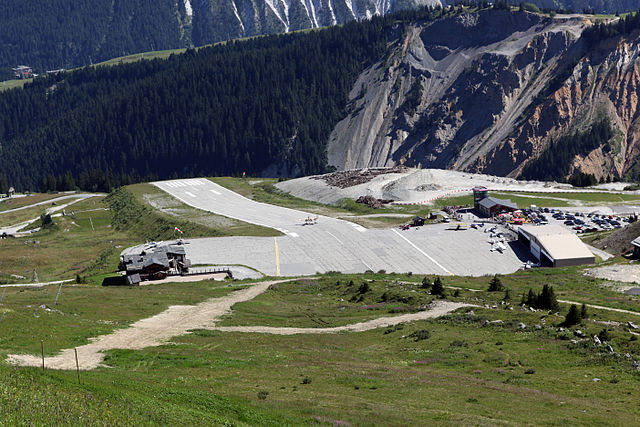 Did you miss the runway? You’ve got two options: take out the ski area that is located right next to the airport or crash. That’s right – there is no go around procedure at this airport either. Between you and me, let’s go visit this one in a helicopter, ok?

Did you think that having a street cross the runway where your plane is landing is nerve-wracking? Then you’re not going to want to try this New Zealand airport where a commonly used railway crosses the runway! That’s right – your airplane is going to compete with a train for landing space. Don’t let the beautiful turquoise waters you can see on the approach fool you – your plane is going down if there’s a train in the way!

If you happen to be taking off from this airport, it isn’t uncommon for a train to get in the way of your plane while it is approaching takeoff speed. If you feel your plane braking hard, don’t worry. It will probably stop on time. Just make sure your tray tables are in their upright and locked positions.

Must Read: The 7 Best Hot Air Balloon Rides Around the World 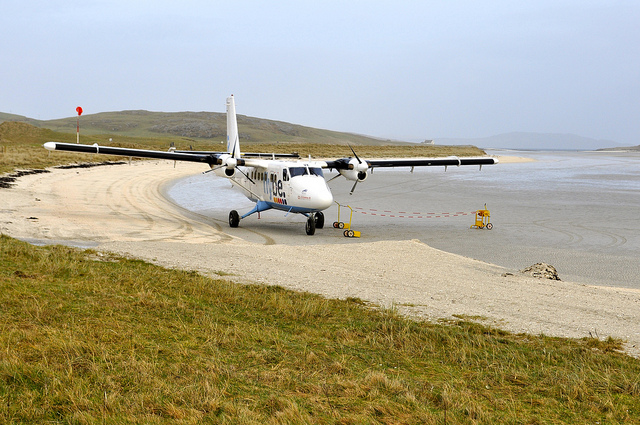 Who needs pavement for a runway? There are plenty of airplanes that are equipped with skis or pontoons so they can land on snow or water respectively, but what about beach sand? This Scottish airport requires airplanes to do just that because their runway is on the beach itself. The beach has three runways and pilots can determine where the runway starts with wooden poles that are staked into the sand.

At high tide, the runways are actually under water. And oh by the way the beach also doubles as a public beach. Is the airport being used? Visitors are told to watch the windsock. The windsock. Yeah.

If you’re flying into this airport, then congratulations! You’re about to land on the shortest commercial runway in the world today. At only 400 meters in length, commercial jets cannot land here at all. That means you’re taking a prop plane or a helicopter. You’re also going to want to make sure your pilot doesn’t overshoot the runway because the airport is built on top of a cliff. Go too far and you’re going to crash into the sea! 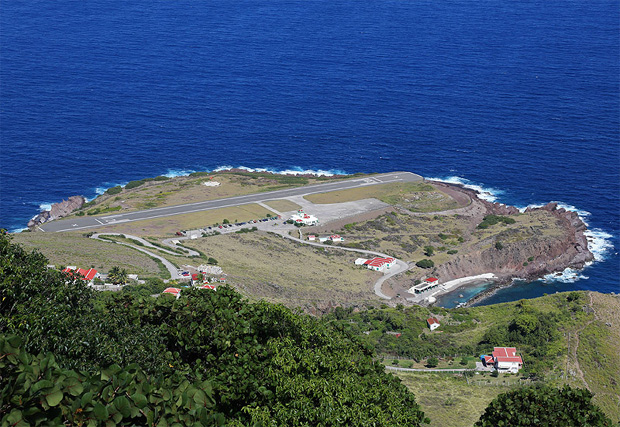 The best way to describe the experience is to compare it to landing on an aircraft carrier. If there are high winds on the day you’re approaching or taking off from here, the experience is even more authentic. Maybe pack another pair of underwear, just in case.

Recommended: The 7 Best Bungee Jumping Locations In the World

Before the runway extension was built, many prayers were said in the landing patterns at this airport because on one side you’ve got the mountains and on the other side you’ve got the sea. Now that the main runways have been extended to standard length, landing here is pretty easy. Easy, that is, if you don’t realize that you’re plane is landing on a platform that has been built out onto the water.

That’s right! There is no ground underneath your airplane when you land or take off from this runway. The views outside your window are spectacular, but so are the fears that the platform supporting your airplane will bust underneath its weight. Tell you what – when we land here, let’s say a prayer together. 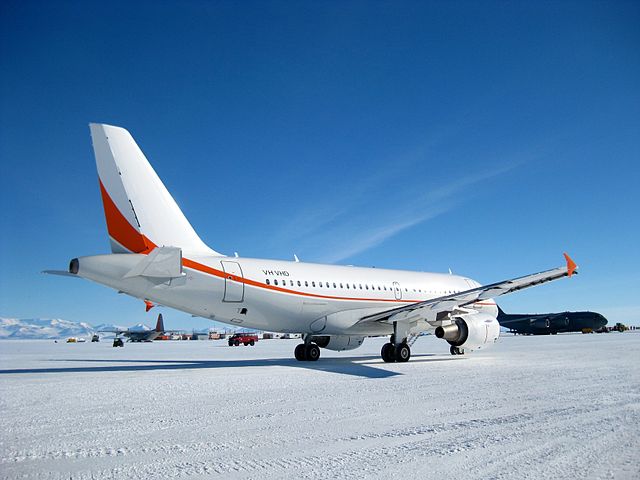 Serving the Antarctic program for the United States, the Ice Runway of Antarctica is the primary service station for Fort McMurdo when the season is right. The entire runway is constructed of sea ice and wheeled jets use this runway regularly. Don’t worry – the ice only sinks in a few inches when your airplane lands. A laser light is used to measure the sinking just in case you don’t sink in any further, say, a few feet or so.

It takes guts to land a wheeled aircraft on ice, but it also takes guts to live and work in Antarctica. It seems only fitting that the airport here reflects the lifestyle itself.

This airports might cause a healthy fear of flying to develop, but after you’ve landed and taken off from them successfully, you’ll have the confidence to fly just about anywhere! Or… maybe not.