Minneapolis vs St. Paul! Which is best? These two cities are regarded as the Twin Cities but, are there any differences between the two? Let’s take a look.

Although society has labeled these two cities as ‘Twin Cities’ there are several differences that dispute this concept.

The rivalry between Minneapolis and St Paul is quite evident that trying to paint a picture of harmony between the two cities is not entirely possible.

But what makes these two cities that unique. Minneapolis vs St. Paul, which of the two is better, and in which manner?

Well, to see which city outranks the other, we have done in-depth research, getting views from each city’s die-hards, to determine their differences.

One thing that’s for certain is that the Twin Cities would not exist if it weren’t for one or the other of these two cities. They play nicely off of each other and exploring both is a must-do activity if you’re visiting Minnesota.

And at the end of this article, we will have a clear picture of whether the two cities are as identical as history paints them, or it’s just another assumption.

So, let’s dive in and see which city takes the day. Be the judge.

Let’s get into some of the most unique differences between Minneapolis and St. Paul.

When it comes to arts and theaters, Minneapolis is the home of the big dogs. For example, the extravagant Guthrie Theater and Walker Art Center put the city on the map.

Watch these amazing things to do in Minneapolis to spur your ideas of arts and theater.

Also, even the smaller scrappy theaters (Jungle, Ritz, Southern,), the beautiful weirdos (Allen Christian’s House of Balls’, and Scott Seekins), as well as the Northeast Minneapolis Arts District, all give Minneapolis its character.

In St. Paul, the impressive Ordway Center for the Performing Arts takes the day.

The city is also home to the Penumbra (the famous African-American theater company), beautiful Lowertown arts scene, and supreme literary legacy. Check out these other top things to do in Saint Paul.

A study by move.org, which analyzed 75 of the largest cities in the country, to determine the affordability of the cities, saw Minneapolis fall at position 28 with an average of $2,105 in terms of monthly expenses.

The monthly expenses considered in the study included:

These statistics show that living in St Paul is a bit cheaper than living in Minneapolis.

When it comes to the number of people living in these cities, Minneapolis takes the day. The city had an approximated population of 432,114.2 million by 2019 and is the most populous of all Minnesota cities.

The city has a population density of 2890 people per kilometer square, and it’s quite cosmopolitan with people from various races living in the city.

For instance, 23% (82,870) of the city’s residents are of German origin while around 4,434 are Danish Americans. Around three-fifths of the Minneapolis population, comprises white Americans.

On the other hand, St Paul had an estimated population of 313,554.4 million persons by 2019. The city, which is the capital of Minnesota has a population density of 2210 persons per km².

Of the total population, around 66.5% are white Americans, 14% black Americans, Asians 10% and 1% American Indians. Approximately 8.7% of the population comprises of Latinos and Hispanics.

See Related: Things to do in Winona, Minnesota

Minneapolis, also known as the land of 10,000 lakes, is one of the top cities to live in, on the Midwest side of the US.

If you are planning to relocate to the city, or just take a few days vacation, Minneapolis has numerous perfect places to stay. For instance Waite Park, Minneapolis takes the lead with a score rating of 83.

Here are some of the top neighborhoods in Minneapolis to live in or stay in during a visit.

The city scores are quite high in some areas such as amenities and housing at (A+) and (B+) consecutively. In contrast, crime, weather, cost of living and education scores lowest.

St Paul, on the other hand, is the business center for the Upper Midwest. The city has 17 distinct localities with 160 parks, making it a great place to live in.

Some of the best neighborhoods to live here include Macalester-Groveland, Hamline-Midway, and Highwood/Battle Creek. 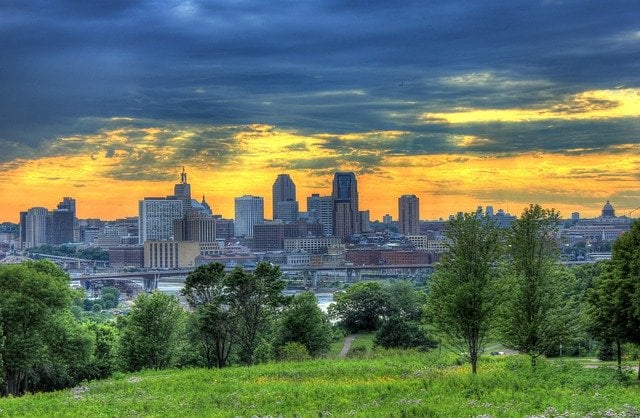 In Minneapolis, public schools cater to an average of 36,000 students at over 70 schools across the city’s neighborhoods.

The city has recently introduced FSCSs (full-service community schools) which offer comprehensive academic, health and social services both for the students and the community.

These FSCSs are seen as a partnership in resources between the schools and the community. The first FSCS in the city were Green Central, Bethune, and Cityview.

In St Paul, public schools cater to over 37,000 students spread across the 56 schools in the city. The schools offer various early education options, as well as college and career built programs.

And just like the schools in Minneapolis, schools in St. Paul also stresses on the diverse global cultures, as well as multilingual learning.

In 2019, St. Paul made headlines after it changed the schools’ start times.

The change was intended to provide high school students more time to sleep. For the secondary schools, their reporting time was changed to 8:30 a.m., with elementary ones required to start at 7:30 a.m.

For beer lovers, you can be sure that Minnesota brews numerous kinds of beers. However, Surly and Summit are the biggest brands of them all.

In Minneapolis, Surly Destination Brewery has become a key attraction for both local beer lovers and guests. It’s a great place where folks can connect and interact over a bottle or two. In fact, their Beer Hall and Restaurant contain a “rotating tap list” of between 25 and 35 beers.

Apart from Surly Brewing Co., some of the other best breweries in Minneapolis include:

On the other hand, St. Paul boasts of the Summit brewery.  And, for over 30 years, Summit has been brewing to perfection, Summit Extra Pale Ale. Other beers that Summit boasts of include:

The company still infuses traditional methods with modern ingredients gathered from all over the world, to craft first-class beers that always make the customers happy.

Minneapolis is famous for its modern skyscrapers.  The city has around 190 high-rise buildings, 39 of which are more than 300 feet tall.

For instance, when the Foshay Tower was built, it was the tallest structure between the West Coast and the Midwest.

Later, the Capella and the Wells Fargo Towers were built to stand at an amazing 775 feet tall.

Currently, the tallest structure in the city is IDS Center, a 57-story building that is 792 feet tall. These are the main iconic buildings that we see in the skyline of Minneapolis photos.

In comparison, the skyline of St Paul is not dominated by very tall buildings. The tallest building in the city is around 471 feet, which is way shorter than the Minneapolis 775 feet ones.

That’s why the city is referred to as the Lowertown, both because of its short structures, as well as being located in the downtown. The town is dominated by old structures and some artist’s lofts.

The people in the Twin Cities are also fun to be around. If they are not working, they are interacting in the local bars taking a sip of Surly or Summit. The residents have also come up with various funny jokes about the two cities.

Let’s see some of the jokes about Minneapolis:

Some jokes about St. Paul include:

After many years of various settlers coming through St. Paul and setting up camp there, the city was formally established in 1854. The proximity of St. Paul to Fort Snelling was the major boost for its success.

The city was initially called “Pig’s Eye”, a name that was coined after one of the initial settlers. But, a Catholic father named Lucien Galtier later established Saint Paul’s chapel which gave the city its current name.

Minneapolis, on the other hand, was established in 1867, and just like St Paul, its history is also connected to Fort Snelling. The city used the power from St. Anthony Falls to grind flour for the military base.

The early settlers of Minneapolis were the Ojibwe and the Sioux people and were the ones who coined the city’s name. Minneapolis came from two words Minne and polis.

Minne is a Sioux word meaning water, while polis is a Greek word meaning city. And, with the rivers and waterfalls which offered a source of power and growth of industries, the name “water city” seemed befitting.

Where do you dine while in the Twin Cities? Well, there are numerous excellent restaurants that you can visit to get a taste of the best meals in the cities.

While searching for restaurants in Minneapolis, North Loop Galley is one of the best places to visit. The place offers a collection of numerous food stalls to ensure that your appetite is served.

If you are looking for the best pizza in town Wrecktangle Pizza serves you just that.

Here, you’ll get a taste of “Detroit-style”, pan-baked pizza. In addition, Ono Hawaiian Plates offers you a chance to try the tastiest meals in town. Other incredible restaurants in Minneapolis include Snack Bar, Soul Fu, and Thigh Times Birdhouse.

If you are in St. Paul, Tori Ramen is the best place to start your search. Here you will get a taste of every sweet meal you may want in the city.

In addition to Tori Ramen, Estelle is another restaurant that overcame all critics to top the list of best restaurants in St. Paul.

The place serves Southern European food, with all types of pasta, pintxos, and various affordable meals built for sharing.

Conclusion on Minneapolis vs St. Paul

The two cities have more differences than most people originally knew. However, despite these differences, they also have quite a number of similarities that make them incredibly attractive.

Based on the above differences, some will prefer to be in Minneapolis while others in St. Paul.

But the Twin Cities are both amazing cities to live in or go for a vacation. I hope that from this Minneapolis vs St. Paul guide, you can now easily choose which city best suits your preferences.