One of the most amazing photography contests in the world today is the annual one presented by National Geographic. The 2013 National Geographic Photo Contest was one of the best ever, showing a wide variety of images that all strike to the very core of who we are as a people and a global community.

Here are the Top 5 photos that we’ve selected from the final contest winners. For more information about the annual contest and to see all the winners, be sure to click on the appropriate links. 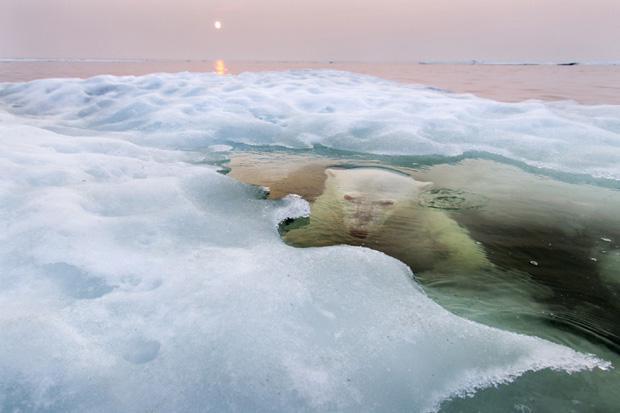 Taken on Hudson Bay in Canada, photographer Paul Souders won the overall 2013 National Geographic Photo Contest and the Nature contest as well this year with his striking image of a polar bear rising from the depths of the water entitled The Ice Bear. These polar bears, which are located near province of Manitoba, are the southernmost polar bears in the world today. Because of the threats of global warming, the lives of these bears are threatened in a particularly unique way.

That’s why this image is so striking – the midnight sun is setting on the Bay that should be filled with ice… but isn’t, which prevents the polar bear from being an effective hunter. Is the bear submerged as a new hunting ploy? Has it been hunting underneath the ice for a meal? The questions that arise have answers that should cause all of us in some way to look at our lives to see if we are each giving our bet effort to care for our own little corner of the planet. 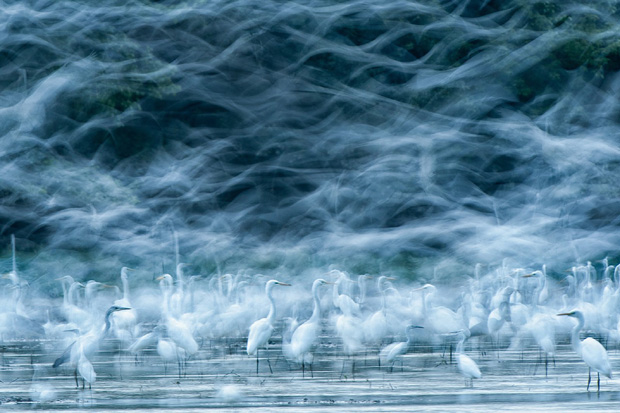 Using motion to track the flight of Hungarian egrets, photographer Réka Zsirmon earned an honorable mention for her image of these majestic birds from a tidal area of the Danube River entitled Flying Egrets. Seeing a flock of birds take off in flight together will always be a birder’s delight, but this image captures the essence of the egret in every form.

There are glimpses of birds in air with the extended stops that Zsirmon used to capture this photo, yet the simple majesty of an egret standing on the shores of the river as well. The background can just be seen through the egrets’ motion, providing both a backdrop and depth to the overall image. For these reasons, this Honorable Mention in the overall contest is the second entry of our list of award winners.

#3: The Bovine Version of a Tanning Bed 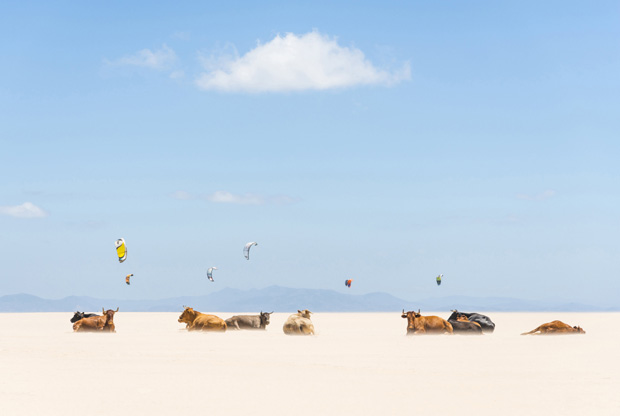 Any photographer worth their salt will tell you that they’ll go to any lengths to get the perfect shot that they’ve happened to see. For Andrew Lever and his image entitled Cows and Kites, he had to crawl on his belly in nearly 100 degree desert heat to capture the image of these cows taking a break in the sun. In the background, kites are being flown on this beautiful, nearly cloudless day to provide a color contrast in the background as foothills to the mountains beyond.

The effort to get this image is almost unimaginable. To make sure that the cows were not spooked by his presence, Lever had to park his vehicle some distance away and then walk toward them in the heat. If you’ve ever gone barefoot on a beach during a hot day, imagine covering yourself in that hot sand without getting sand in your camera to get the perfect image. For his efforts, this Honorable Mention takes the third place in our list.

#4: A Graveyard of Trees

Highlighted by a powerful lightning strike, a first glance at Julie Fletcher’s image entitled Graveyard makes you think that it has been highly altered in some way. From the multiple streaks of lightning to the almost fluorescent green of the swampy water that covers this graveyard of trees, the image is very surreal.

“I cannot describe the eerie feeling I had when I walked in on this scene,” Fletcher told National Geographic. “ I followed a massive storm front several hundred kilometers hoping to capture something special but this blew my mind. The surreal milky green water is a natural phenomenon caused by electromagnetic activity from the lightning hitting the water’s surface.”

With the concept of death being framed by life, this Honorable Mention in the 2013 National Geographic Photo Contest takes the fourth spot in our Top 5 images.

#5: A Small Bit of Happiness 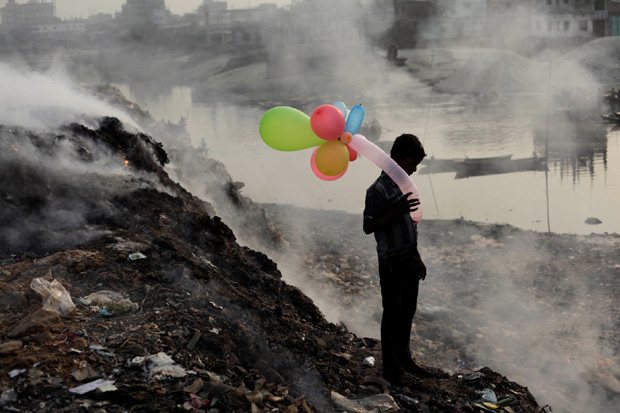 The Buriganga River is highly polluted and this image shows us why. On the shores of this river near Dhaka, Bangladesh, is a burning heap of junk that must be leaking all sorts of debris and toxins into the water that those in poverty use every day for drinking, bathing, and cooking. Yet there, in the midst of what many of us would consider some of the worst living conditions ever, a young boy stands there with a colorful set of balloons – a happy treasure.

The capital city often has very little to celebrate. A recent election was marred by tremendous violence as 21 people were killed and countless other abuses were handed out. Yet there, in this world of chaos and disorder, this young man plays with these balloons, happy in his own world, even while the rest of the city around him suffers in worry from night raids.

This moving photograph from Andrew Biraj called Life Along a Polluted River deserves recognition and that’s why we’ve included it here to round out the Top 5 images from the 2013 National Geographic Photography Contest.