Explore the traditional Midwest with an outdoor lifestyle at beautiful Minneapolis. Here are the best places to take some pictures in the city.

Minneapolis AKA the culture capital of the Midwest is known for its artsy scene with the trimmings of a burgeoning contemporary city. With a number of performing arts spaces, swanky museums and lots of lakes, Minneapolis has something to offer for every type of person.

If you are a Minneapolis-native or a first-time visitor, the beauty of Minneapolis is just waiting to be captured.

From natural landscapes or edgy theatres, we’ve rounded up the best places to take pictures in Minneapolis.

As you explore everything Minneapolis has to offer, here are the best places to capture some memories on your travels: 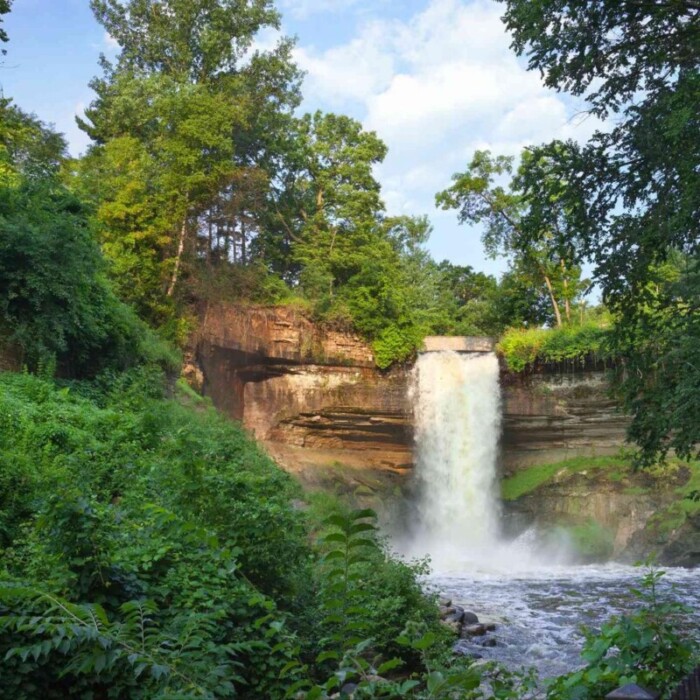 Waterfalls are amazing, wherever they may be but Minnehaha Falls in Minneapolis deserves a shout-out. The stunning 53-foot waterfall is one of the prettiest spots in the city and is totally picture-worthy all year round.

You can either watch the falls roar in the summer or see them turn into icicles in the winter- it’s a sight to see in during any season. You can see the waterfalls from the walkway overhead or watch it take the winding staircase to the bottom.

If you want to make a day of it, there are lots of hiking trails surrounding the waterfalls.

End your day with a meal at Sea Salt Eatery. 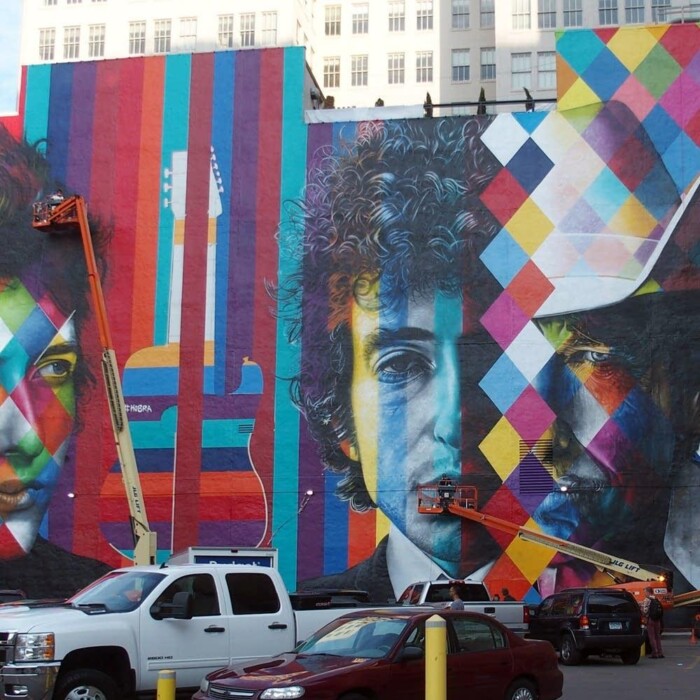 Minneapolis is known for its thriving music scene and is home to numerous performing arts centers. The city also has a number of spots that showcase the city’s pride for its music and arts. One of the most iconic spots in Minneapolis is the Bob Dylan mural.

The mural located on 15 S 5th Street shows Bob Dylan at 3 stages of his life- from a young musician to a Noble Laureate. The kaleidoscope mural shows young Dylan as a troubadour to a third image of him rocking his trademark hat.

Many believe the mural is also a depiction of Dylan’s decision to switch from the acoustic to the electric guitar which created a lot of controversy early in his career.

The mural was created by the Brazilian street artist Eduardo Kobra and is a must-see on a trip to Minneapolis.

The literal cherry on top of the cake at this location is Spoonbridge and Cherry which many consider to be the symbol of the city. The large spoon with a cherry makes is a great spot to take some really fun pictures.

If you happen to be there during the summer, the park also hosts a Rock the Garden festival every June. Don’t skip out on this iconic photo spot.

While Minneapolis is great from the ground, the views from above are just as great. The city has a number of different places to see the skyline but the best one would have to be the Stone Arch Bridge.

The bridge is a railroad crossing between downtown Minneapolis and the Saint Anthony Main neighborhood. While there are plenty of things to do on either side of the bridge, the Stone Arch provides some of the best views of the city.

The bridge is located on 100 Portland Avenue and you can watch the skyline from the underlit bridge as water from Saint Anthony’s Falls gushing below.

The 23-arch bridge was built in 1883 and is the only bridge made of stone that stretches across Mississippi.

After you capture the city’s skyline, you can explore the Mill City Museum and Guthrie Theatre in downtown Minneapolis.

See Related: Things to do Around Minneapolis Riverwalk 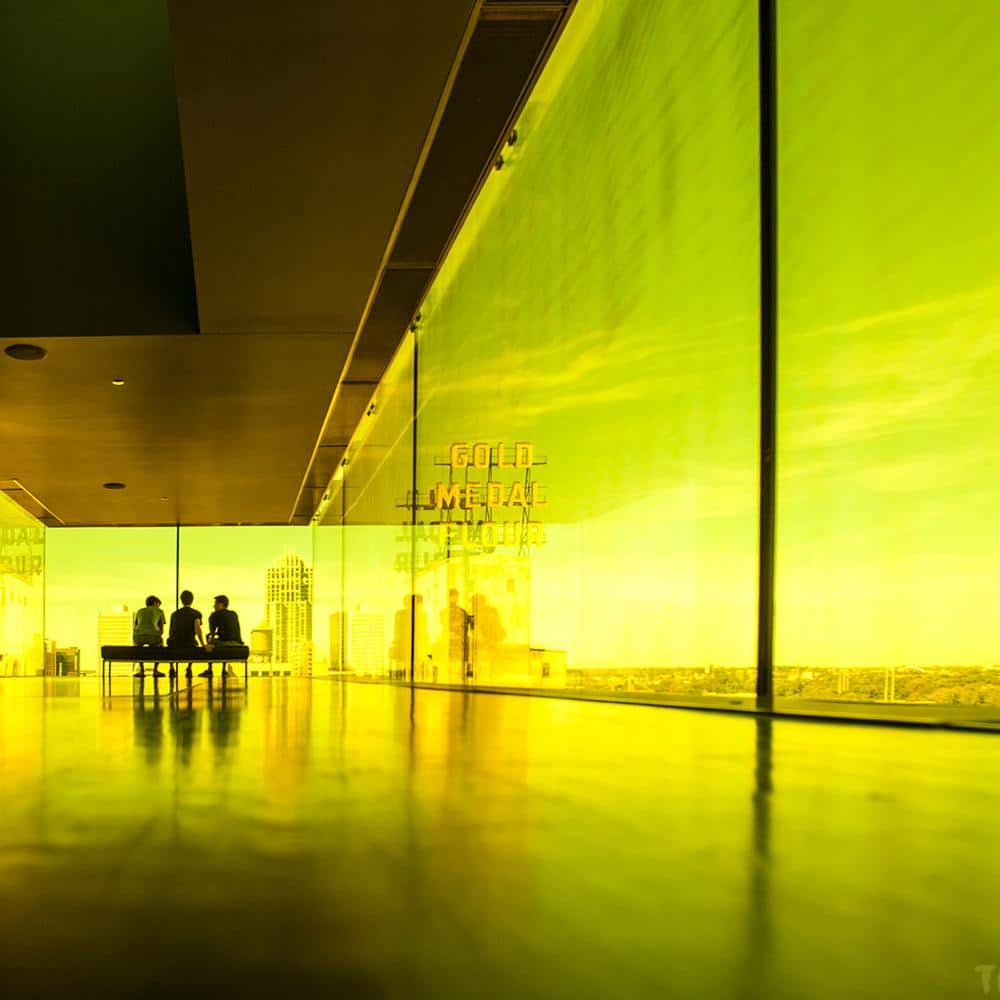 The Guthrie Theatre in downtown Minneapolis is one of the best places in the city to catch a show and experience the Twin Cities’ thriving performance arts scene.

In addition to this, the building is also known for its eclectic architecture that makes for some incredible photo ops.

The Amber Box located on the ninth floor of the theatre provides some panoramic views of the buildings that surround the Mississippi River. This also includes views of the Stone Arch Bridge and the Mills Ruins Park.

If you are looking for some overhead shots of the city, this is by far the best spot.

However, the room, as the name suggests, is surrounded by glass with an Amber Tint. So you will get to see the city through a yellow lens. 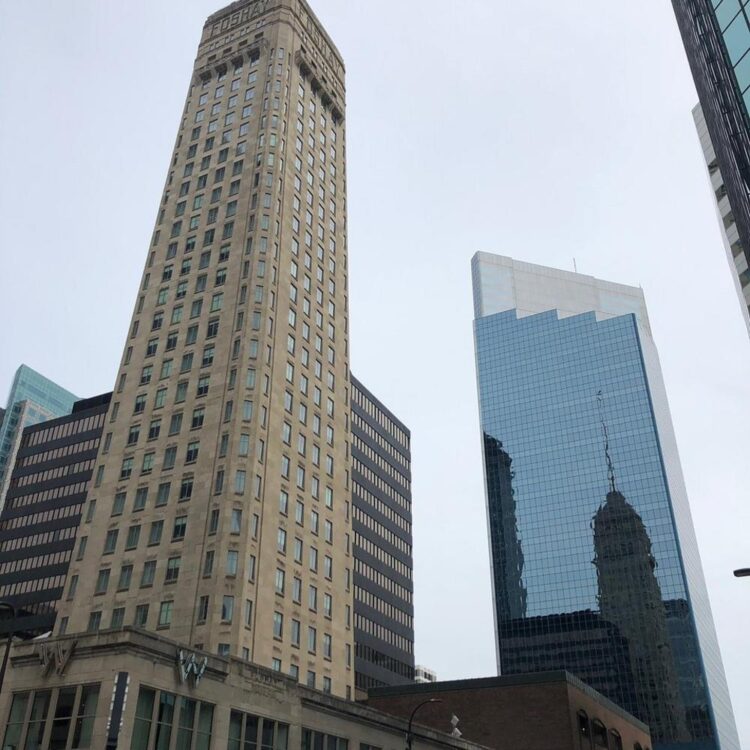 One of the most iconic buildings in Minneapolis’ skyline is the Foshay Tower. Ironically, this building also provides some of the best overhead views of the city. The Foshay is known for its four-star hotel but the highlight of this building is the observation deck at the very top.

The tower provides 360-degree views of the city and is a great picture spot if you are looking for some landscape shots. The deck also has a museum that depicts the history of the tower and the man who built it- Wilbur F. Foshay. The entry ticket to the deck and museum costs $10.

After seeing the city from above you enjoy an amazing dinner at Manny’s Steakhouse located in the tower and later drinks at Prohibition. 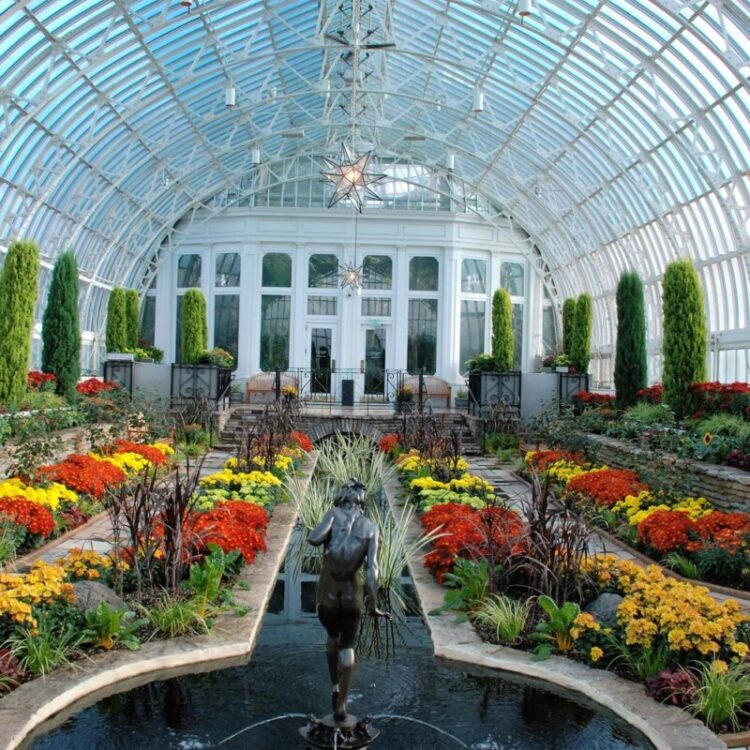 In addition to its lakes and waterfalls, Minneapolis is also known for its floral beauty. One of the best places to take pictures around Minneapolis is the Como Park Conservatory.

Yes, it’s located in St. Paul but it’s right near the border of the Twin Cities so you won’t be going too far out of your way.

Located on a 450-acre property, the conservatory is the city’s gem.

The garden is a picturesque spot filled with flowers, fountains and sunken gardens. There are a total of six indoor garden spaces build under one acre of glass.

Since it is indoors, the Como Park Conservatory is worth a visit in any season. The Sunken Garden also features five garden shows each year.

After a trip to the Conservatory, explore everything the park has to offer. You can rent out paddle boats at the lake or walk one of the many hiking trails in the surrounding area. There is even a golf course and a museum on-site. 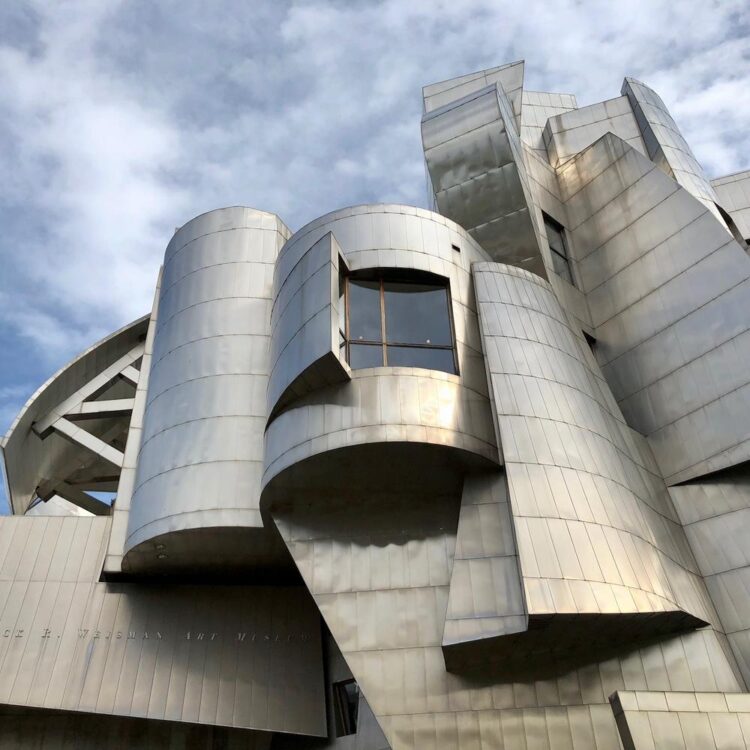 Another one of Minneapolis’s architectural wonders is the Weisman Art Museum. The building made of steel looks like the Tin Man come to life.

It was designed by Frank Ghery in 1993 and is totally out of this world. But once you are done marveling at the building from the outside, head in because it just gets better.

The museum contains five art rooms that The New York Times famously called “the best rooms for viewing art in the world.”

Weisman features a mix of contemporary and ceramic art with a studio on-site. The building also has a terrace that offers spectacular views of the city and beyond.

For great pictures of the museum’s exterior, head to Washington Avenue Bridge for a complete view. The museum hosts a number of events throughout the year as well as guided tours that start at $100. Regular admission is free. 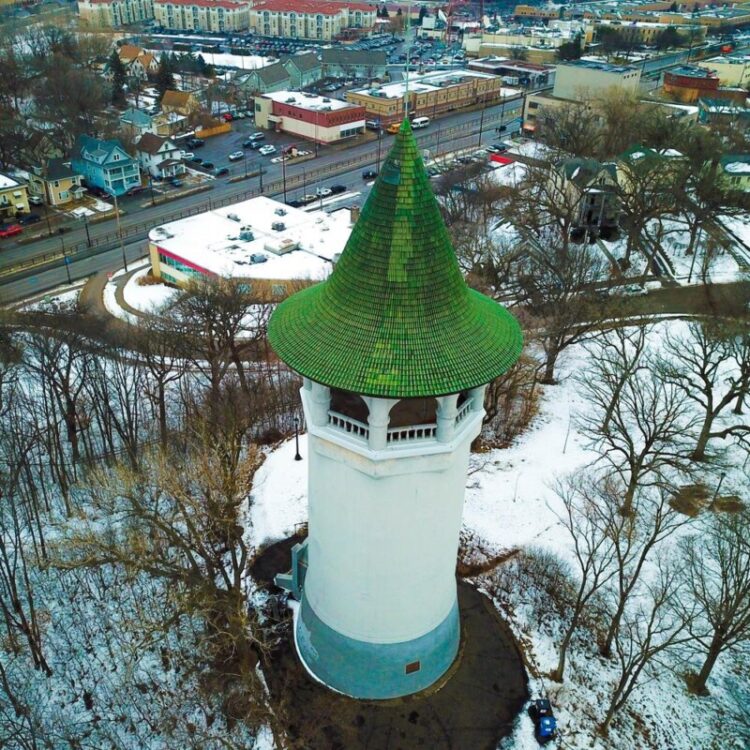 To explore more of Minneapolis’s natural beauty head to Prospect Park which is also home to the Witches Hat Tower. The tower earned its name because the top of the tower actually looks like a witches’ hat.

Rumor has it that Bob Dylan’s song “All Along The Watchtower” is based on this tower.

In addition to lush greenery, Prospect Park also offers some gorgeous views of the city. For just one day a year (the Friday following Memorial Day), visitors get to climb up the winding stairs of the tower.

The scene offers views of the Minneapolis skyline and the US Bank Stadium. This is also a great spot to catch the sunset and you get to see downtown Minneapolis and the University of Minnesota align in view.

If you visit on any other day, the 100-foot Witches’ Hat Tower which has elicited mystery for years is still a great spot to take pictures. 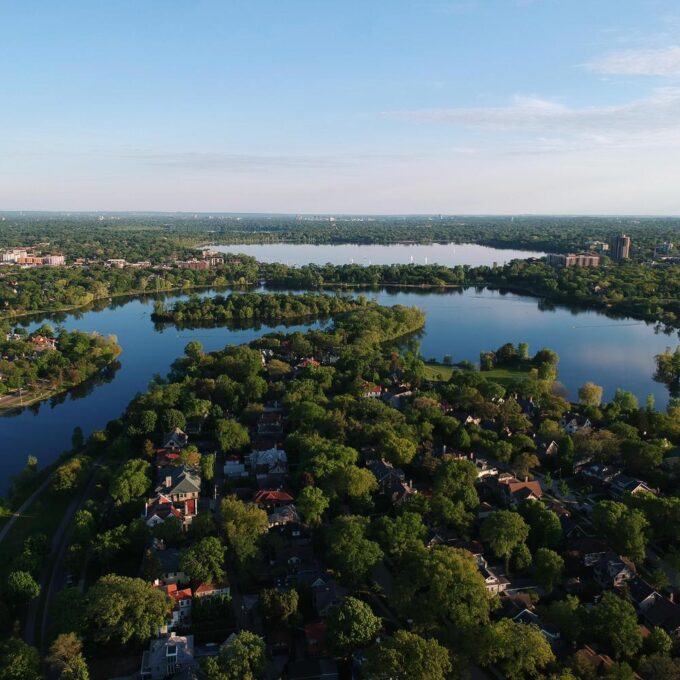 Minneapolis is known for its great outdoors (especially its lakes). One of the best places to take pictures of Minneapolis is at the Chain of Lakes.

As the name suggests, the Chain of Lakes connects a number of different lakes including Cedar Lake, Brownie Lake, and the Lake of Isles.

The Chain of Lakes is one part of a much bigger park and is a great place to get a workout in.

You can jog around the park or explore one of its many scenic hiking trails. For even better views, rent out a paddleboard and explore the bridges and lush greenery of the park from the water.

If paddleboarding isn’t your thing, you can even rent out a canoe or a kayak. The picturesque park is worth a visit during the spring or summer seasons. 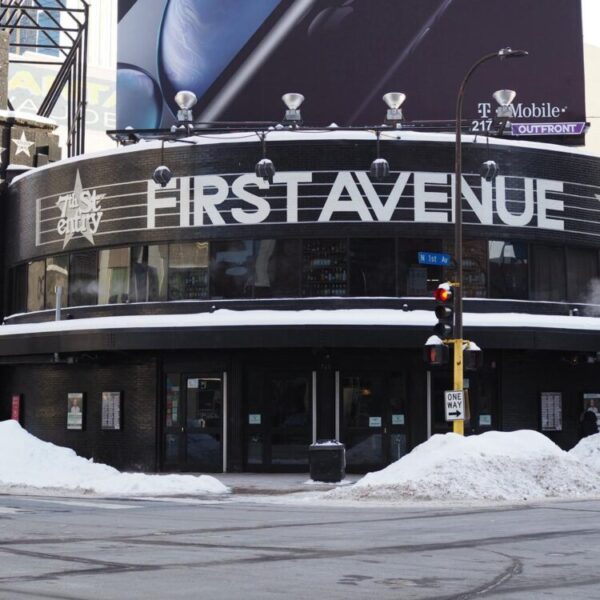 Minneapolis is the birthplace of Prince and a trip to the city is not complete without exploring its rich music scene. For some great pictures, head to First Avenue and 7th St. to pay tribute to the music legend.

First Avenue is also one of the biggest clubs in Minneapolis and has seen some of the biggest stars perform on its stage. The façade outside the buildings features these music icons, including hometown legend, Prince.

The singer was known to play many impromptu concerts at the club and many of the scenes in Purple Rain were also filmed here. Some of the most famous bands in the world have performed here.

Take a selfie with the famous wall black wall with its white stars and if you are a music junkie, catch one of the many acts that take place at the famous First Avenue stage.

The wall of stars and the musical performances are totally worth your time!

With a bountiful of activities and places to see, Minneapolis provides the perfect backdrop for great pictures. Whether you’re a native of the city or a first-time visitor, there are so many places to explore. While some are famous, others fly under the radar but are just as beautiful.

We hope this list of the best places to take pictures in Minneapolis inspires you to find the best spots on your next trip there.

The best time to visit this beautiful city is during the summer where you can explore Minneapolis’s natural beauty at its best.

via travelers is a modern travel blog providing the best tips, hacks, and itineraries to ensure you have an amazing adventure.

A self-proclaimed digital nomad, Divya has a love for discovering new places. Perpetually ensconced with a book in her hand and coffee in the other, she’s always on the move. As a world explorer, she learnt that traveling helps rejuvenate the soul and fills it with memories and lessons that no classroom can teach.