Planning a trip to western Germany but don’t know what is city to stop by? You don’t need to worry because Duisburg is one of the best cities to explore! Duisburg is a charming small city that accommodates a number of diverse and beautiful sceneries.

The city features the world’s largest inland port, picturesque landscapes, a great nightlife experience, and the richness of Duisburg in Industrial history.

The modern development and the old industrial infrastructure blend harmoniously and create a unique ambiance and extraordinary trip in the city. Enjoy a great and ideal travel adventure trip with the list of Duisburg attracts we have prepared below.

Fun & Best things to do in Duisburg, Germany

The Inner Harbor is linked to the Rhine River and is situated in Duisburg, Germany. This harbor measures 89ha. For more than a hundred years, it was the main harbor and central trading area in the town, particularly during the peak of the Industrial Revolution.

From the mid-1960s, people began to use the harborless, and eventually, it was abandoned for 20 years before renovation plans were picked up. Once the renovation was approved, this old industrial site was significantly transformed as part of the International Building Exhibition Emscher Park (IBA), which went on from 1989 to 1999.

British Architect Norman Foster provided the foundation for this development model in the District of Ruhr in 1994. From that time, the Innenhafen has changed into a region that has housing, culture, employment, and water-based recreational activities.

Presently, the Harbor functions as both an industrial edifice and a major marker on the Route der Industriekultur. Some of the places of interest within the novel’s rebuilt grounds of The Innenhafen are the Werhahnmühle, which is used as a “Legoland Discovery Centre“ after the Children’s Museum ATLANTIS left the premises.

The “Garden of Remembrance, “the Synagogue of the Jewish District of Duisburg-Mülheim/Ruhr-Oberhausen, and the Küppersmühle transformed into a museum of arts by de Muron and Herzog.

In addition, a marina was erected on the further part of the inner harbor garden. A buckled bridge (Buckelbrücke) for pedestrians was also built.

This bridge is meant to spread the marina down to the nearby Holzhafen. With these many attractions has come an active dining culture. There are over 15 clubs and restaurants as well as privately-run bars and corporate franchises.

This is a landmark and art installation in Duisburg, Germany. It was constructed in 2011 and designed by Heike Mutter and Ulrich Genth. This art installation looks like a rollercoaster, yet it is actually a walkway plus stairs. It has a vertical loop that continues the stairs and walkway; however, that part cannot be walked on and stays closed off.

From afar, the shiny metallic track gives the impression of increased speed and movement. At a closer glance, the apparent lane is actually a stairway that is meticulously twisted in a roller coaster shape.

Visitors can ascend the Tiger and Turtle – Magic Mountain on foot. At the top, which is the tallest point of this sculpture – 45 meters beyond ground level – visitors get to enjoy an exceptional view of the Western Ruhr landscape.

With a 44 x 37 meters base and 21 meters height, the Tiger and Turtle – Magic Mountain is among the largest sculptures in Germany. It is also a remarkable feat of engineering, particularly the stairway (produced in partnership with Arnold Walz) draft and how it beautifully winds down the three-dimensional form of the whole structure.

For years, Heike Mutter and his partner Ulrich Genth have been doing art projects for exhibitions and public areas. The duo currently works and resides in Hamburg, Germany, where Mutter has a professorship at the Hochschule für bildende Künste.

See Related: Best Things to do in Stuttgart 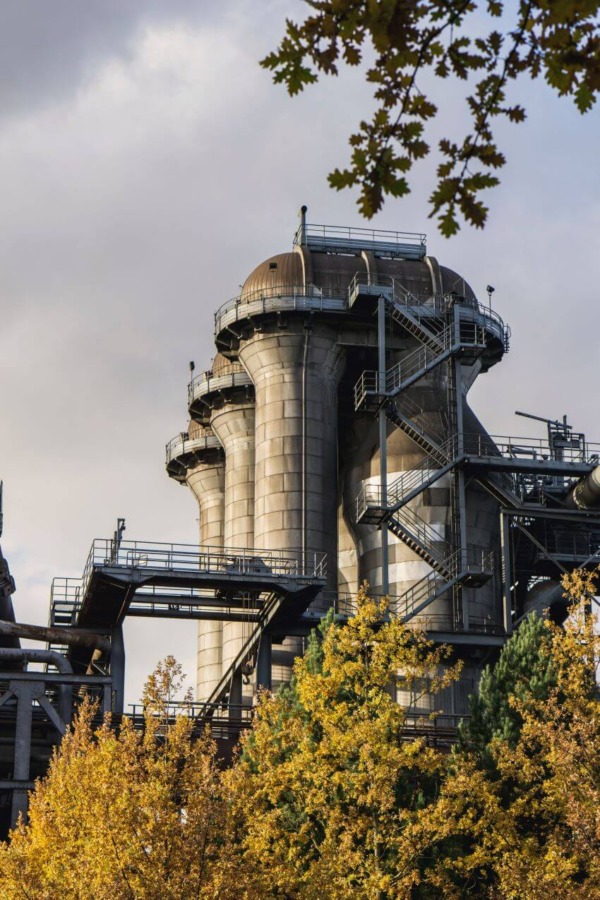 This is a park for the public that is situated in Duisburg-Meiderich, Germany. Latz + Partner (Peter Latz) designed the Landschaftspark in 1991, intending to make it reconcile and appreciate the past industrial period instead of rebuff it.

Landschaftspark strongly identifies itself with what the site used to be – a steel and coal manufacturing plant (that was neglected in 1985, leaving the environment considerably polluted) and an agricultural site in the mid-19th century. The Landschaftspark is split into different sections and bordered off.

The sections are divided based on their pre-existing conditions, like the kinds of plants that had started growing in the area or how the site had been portioned by pre-existing railways and roads.

Then this fragmented arrangement was interwoven together via several waterways and walkways, positioned in line with the former sewer systems and railways.

This way, every piece has its character intact while also having a relationship with the surrounding close to it. Inside the major complex, the designer Peter Latz highlighted particular key elements.

For instance, outmoded gas tanks were transformed into scuba diving pools, the concrete walls were refurbished to be used by the rock climbers, and concrete bunkers were used to plant cozy gardens. A core area in the factory, which used to be the heart of the old steel mill, was redesigned into the shape of a pizza.

All the spaces in the Landschaftspark are designed with elements that enable a definite time reading. The park was made against the backdrop of, say, for instance, a grandfather, who possibly used to be a worker at the plant, who could take a stroll with his grandkids.

Telling history and background about the different machines and the work he did in the past. Essentially, memory played a huge part in the park’s design.

Duisburg-Bissingheim station is located in Duisburg town within the North Rhine-Westphalia area in Germany. Duisburg is a metropolitan town that lies on the Ruhr and Rhine River confluence. It is one of Ruhr’s biggest cities and the 15th biggest city overall in Germany.

Duisburg used to be a member of the Hanseatic league in the middle ages. It later developed into the main center of the chemical, steel, and iron industries. This is why it suffered severe bombing in the Second World War.

Presently, it has the biggest inland port in the world, with 40 kilometers of a wharf. It is also home to one of Germany’s biggest commercial train station businesses.

The Duisburg-Bissingheim line stations are known for their modern style, design, ease of use, and operation. In 2019, it was reported that 1.3 billion euros had been spent on improving the state of the DB stations. With about 920 thousand square meters of space, the train station line is a major name in the German transportation circle.

The DB train station is also environmentally friendly and constantly working on ways to have more eco-beneficial train rides. Tickets for the Duisburg-Bissingheim can be purchased online, in person, or on the phone.

There are numerous hotels and restaurants close to this train station for tourists and visitors who prefer having quick access to transport services.

The Ruhrwehr Duisburg is situated on the Ruhr about 2.626 km ahead of the Rhine. It is reachable by cycling or walking. The locks are made to be twin weir and have double retaining walls for each particular weir opening.

The top weir is made as a hook gate, while the lower serves as a box gate. However, they work mostly self-sufficiently. The structure has a whole width of 150.88 meters with four weir openings measuring a well-defined width of 30 meters.

Only the Rhine typically influences the water level in the Duisburg/Mulheim area; in situations where the River swells because of severe floods, the weir structures are removed to allow unobstructed drainage and prevent wreckage of the closures.

The Ruhrwehr Duisburg is particularly stunning during the evenings. However, it is still a great sight to see at all times, whether on tour or just strolling past. Cyclists, as well as pedestrians, can travel the weir.

For visitors, there are many provisions to relax and enjoy the view, such as wide meadows and benches. It is almost impossible to resist the gorgeous natural vista hovering gently above the weir.

Both residents and tourists tend to be big fans of the Ruhr whenever they are in Duisburg. Residents can be seen taking a stroll during their work break or relaxing with a drink.

Tourists are often seen strolling as well or just taking in the sights or even hiking. The Ruhrwehr Duisburg is also great for photography, especially from above the weir and open locks. The Ruhr is sometimes called the “small “waterfall” of Duisburg.”

This Zoo was established on the 12th of May 1934. It is among the biggest zoological gardens in Germany. Before it achieved its current fame, the zoo was just a small park till it was loaned its first elephant.

When the Second World War began in 1939, the zoo shut down and was only reopened in 1946 with loaned animals from the Munich Hellabrunn Zoo.

By 1958, a building to house seals and penguins was provided for the zoo by Helmut Horten, a businessman. In 1970, the official change from a small animal park to an actual zoo was made official.

It is particularly popular for the dolphinarium on its grounds and for koala breeding (beginning in 1994). The zoo’s research on Dolphin behavior has drawn both admiration and criticism; still, it thrives. Following the commencement of koala breeding, an outdoor structure for gorillas was set up.

In addition, an inter-city partnership between Wuhan and Duisburg was established to construct a Chinese garden with fauna inclusive. The Duisburg Zoo has also successfully bred animals such as red river hogs and fossas, which are Carnivorous mammals from Madagascar.

It is situated in the Northern region of the Duisburg Urban Forest, right on the Mülheim border close to the Ruhr. The zoo is split into eastern and western parts by Federal Highway A3 and joined back by a rather leafy country bridge.

The Federal Highway is often unnoticeable to tourists and visitors who come to the zoo.