Amsterdam is an underrated beer city. The city features outstanding cafes, pubs, nightlife and so much more. These are the best beers in Amsterdam that you need to try during your trip.

Holland is home to some awesome beers. Who needs Belgium to the south and Germany to the east when you have some of the finest pales lagers right there in Holland?

The Netherlands exports the largest proportion of beer of any country in the world – approximately 50% of production, according to The Brewers of Europe.

You can get a beer at cafes, breweries, terraces and so much more. I’ve been to plenty of awesome places with beer like my hometown’s best breweries in Minneapolis and the top breweries in Munich.

To me, nothing compares to having a Heineken or a Brewerij ‘t Ij along a canal. Sorry, London pubs and Munich beer halls.

There’s something about the crispness and culture of Amsterdam that makes it all come together for me.

So, I’m drinking a Heineken right now picturing I’m back in Amsterdam enjoying canals, architecture and history all in one sitting. 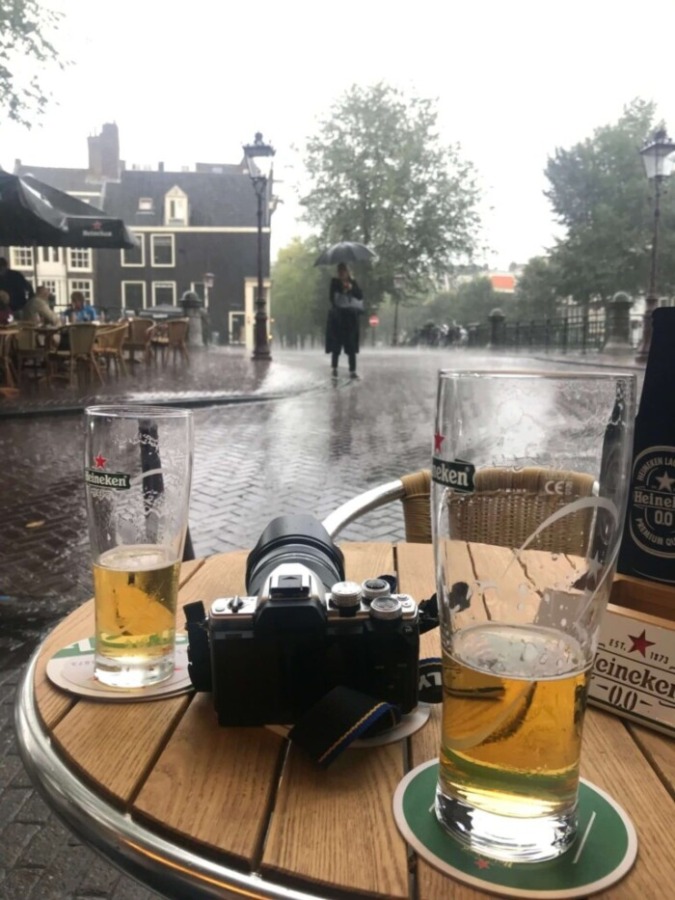 Now, let’s get into the fun stuff of the best beers to drink.

Alright, let’s get into the official list of the best beer options to drink while you are in Amsterdam.

Think this is a beer from Bavaria? Think again. Bavaria is a pilsener from Lieshout, Netherlands.

Bavaria beer is another pale lager. The specialty of Amsterdam! Bavaria beer is much cheaper than all the other options. It’s a good one if you are looking to save a few bucks and get more.

It’s not my favorite of the bunch, but when in Amsterdam? Why not have one?

Grolsch is a more affordable, similar version of the kings of Amsterdam: Amstel and Heineken.

Grolsch is known for its flip-top or swing-top bottles. The beer is a nice crisp lager that is easy to drink no matter the time of day.

See Related: Fun Things to do in Amsterdam

Oedipus is a Greek tragedy that I’m sure we all know about – yeah, you know the whole marrying thing. It’s actually fun to go to the Oedipus Brewery given the hand-written journals channeling some humourous thoughts while drinking excellent craft beer.

You can find Oedipus beyond the taproom at plenty of brown cafes and pubs around Amsterdam. I’m a huge fan of their colorful logo and approach to hand-crafted ales.

Fourteen monasteries—six in Belgium, two in the Netherlands, and one each in Austria, Italy, England, France, Spain, and the United States—currently produce Trappist beer as recognized by the International Trappist Association.

De Koningshoeven is one of the Netherlands-based Trappist breweries. You can get the beer in the form of a single, dubbel, tripel, and quadrupel. This is in order of strength.

De Koningshoeven means the King’s farmhouses in Dutch. If you are not a huge Belgian, Trappist beer drinker, you should opt for a single or a dubbel.

Anything above that is likely too strong for you. There will be no shortage of flavor with some hints of sweetness along the way.

De Prael is a hard-to-find taproom located near the Red Light District. It’s a unique brewpub that offers some great microbrew options that you’ll likely not get anywhere else.

If you are a true micro/craft brew drinker, this is a great option to try some beer you might want to take with you.

It’s a crisp, clean beer that won’t overload you with flavor, but you’ll be able to easily enjoy one on a hot summer day.

De Bekeerde Suster is a very cool craft brewery located in the heart of Amsterdam Centruum (city center). The brewery stands on an old monastery that housed sisters of the church. The building dates back to 1450.

Yeah, it has plenty of history. A relevant one too. Believe it or not, the sister brewed beer within this exact building and sold it to Amsterdammers. This is no longer the current practice, but the brewery opened in honor of their memory.

You’ll find some tasty Dutch ales here without having to go far out of your way. You’ll hear a pretty awesome story along the way too.

Walhalla is a great craft brewery that might be tough to find while you are there. It’s worth it and is one of the better hidden gems of Amsterdam out there.

Walhalla is a good differentiation from the typical pale lagers offered by the beer giants of Bavaria, Grolsch, Amstel, and Heineken. Walhalla is a small, local craft brewery with a taproom

Try the Loki Golden IPA, which has plenty of flavor and hops for you to enjoy. The taproom is located on the north end of the city across the river in a neighborhood called Ijplen.

If you are looking to get into a more local area, visiting their taproom would be a very good decision. If you like craft breweries, you can plan your own beer tour in Amsterdam to tasting all the best local beers.

The king that you already know. There’s a reason why Heineken has an entire museum for their beer. It’s obvious that Heineken is one of the things that Amsterdam is famous for, but to me, it’s more than just a well-known beer.

It’s a legacy, a story, and a culture. It’s probably a bit touristy, but I love to order the extra cold Heinekens at Dutch cafes. It costs a little bit extra, but it just ends up tasting a bit differently.

I’ll always say that Heineken tastes just that much better in Amsterdam. If you want to go to the museum, buy your Heineken Experience tickets in advance to save money and avoid lines.

Personally, I’ve never done it. I like drinking Heineken the real way. In a cafe. Along a canal.

Brouwerij ‘t IJ is the kind in my opinion. The beer is phenomenal and comes in a ton of variations. The combination of craft beer and beer excellence is extraordinary.

You know sometimes you can’t always drink craft beer? But with Brouwerij ‘t IJ you can. It’s simply that good.

I suggest that you visit the actual brewery at De Gooyer. You’ll see a traditional Dutch windmill (that is where it’s located) and you can come away with an awesome souvenir. The brewery has an awesome logo and designed shirts, sweaters as a parting gift from your trip.

If you’re in Amsterdam during the summer, visit the Blauwe Theehuis (Blue Tea House) located in Vondelpark. Vondelpark is one, if not, the best park in Amsterdam by far.

It’s a buzzing, fun outdoor patio in the middle of the park operated by Brouwerij ‘t IJ. You can get all the beers you’d find in the taproom. Plus, you’ll be in store for some epic people watching.

Here are some other Amsterdam souvenirs you might want to consider during your trip.

Make sure you have at least two of their beers during your trip. Brouwerij ‘t IJ offers the best beers in Amsterdam in my opinion.

Stopping here is a must-have in your Amsterdam itinerary.

Amsterdam is home to some amazing beer, beer tours, breweries, and history. Soak it in and enjoy a few beers along the way.

You don’t have to stick with just pale lagers during your trip to Amsterdam. You have plenty of other amazing beer options and taprooms at your disposal.

What do you think are the best beers in Amsterdam?