Minneapolis has a long-standing history of beer. In today’s age, we are faced with hundreds of different craft breweries all suited to your different styles and taste in beer. These are some of the best breweries in Minneapolis to consider during your visit.

Congrats, you’ve landed at a travel blog that is home to the Land of 10,000 beer… I mean lakes. Minneapolis is an absolute gem for craft beer.

You simply can’t go wrong at a number of breweries around the area, but how do you find the BEST and brightest of them all?

Breweries are simply in our DNA as Minnesotans. We’ve migrated to a culture of spending time at the brewery to catch up with good friends, watch the game and even bring your furry friends or children.

There is so much beer they even have a craft brewery tour that will help you see the best breweries around the Twin Cities in one journey.

No need to worry about driving along the way. Make sure to book your craft brewery tour at Get Your Guide by using this link to get the best deal in town.

Minnesotans deal with harsh temperatures and wicked weather. So why not cozy up to a brewery that features awesome beer and good vibes. In Minneapolis (in particular), we have diverse dining like restaurants on Lake Street or we have a gorgeous summer riverwalk. Read more about the Minneapolis riverwalk and all that it has to offer.

After 76 pints and visiting over 20 different locations, I have answers for you.

Minneapolis is the Land of 10,000 Craft Beers. I've tasted them all to make your decisions easier. Click To Tweet

I’ve done the homework to find the answers to all of your questions on how to get the best craft beer in Minneapolis.

Let’s get into our list of the top breweries in all of Minneapolis (in order).

56 Brewing is a quiet, relatively unknown spot in Northeast Minneapolis. Personally speaking, I think it’s underrated and is a must-go-to spot.

They have a great summer location with a garden and an awesome front patio to bask in the sun.

I like 56 Brewing as a hidden gem of Minneapolis and you won’t have many lines, busy brewpub or hard to find parking. It’s a great spot to get a feel for the local brewery scene to relax and enjoy a pint.

It’s good vibes all around, which is why their tagline is “Garden to Growler.” 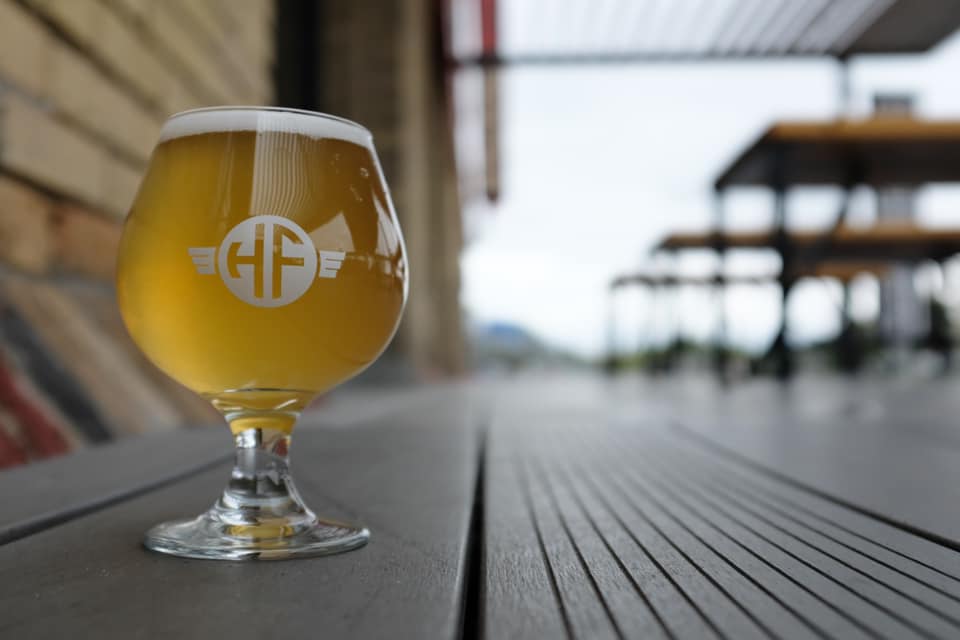 HeadFlyer is a great spot right near downtown Northeast. They have a set of awesome beers and great vibes all around.

There are a TON of breweries in Northeast and I’ll get to the usual suspects below. HeadFlyer is one of the only that is nestled right near downtown Northeast Minneapolis, which makes it easy for out-of-towners looking to hit multiple breweries.

Fair State is located on the north end of Northeast Minneapolis. It’s a bit of a journey to get to, but worth it. Their story is awesome.

Fair State operates as a cooperative. They have over 1,500 members. I love this model and I’m surprised not many other breweries have adopted this approach. I continue to believe the breweries are (and will continue to be) localized businesses.

Fresh beer comes from local sources. Think of it as a decentralized model. Why not get beer freshly brewed a few blocks from your home? This is why I love Fair State and their approach. You can hit some of the other Northeast breweries that I will touch on below just a few block down the street from Fair State.

They continue to build community and amazing beer along the way. The tagline says it all:

Second to Surly, Fulton is one of the original craft breweries in Minneapolis. They’ve stayed tried and true to their formula. Awesome ales. Recently, they’ve ventured out into the hard seltzer game. The location of the brewery is right by Target Field where the Minnesota Twins play in the North Loop of Minneapolis.

It’s great are if you are looking to grab a bite of dinner following your brewery excursion. There are plenty of awesome restaurants nearby. 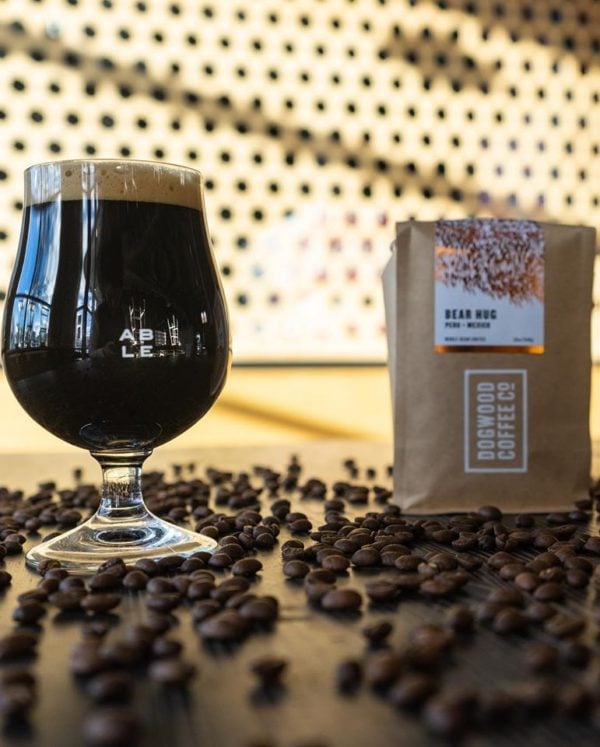 I love the design of the taproom and inside. If you like sports, they have a great setup for watching the games with a giant 10-foot screen. 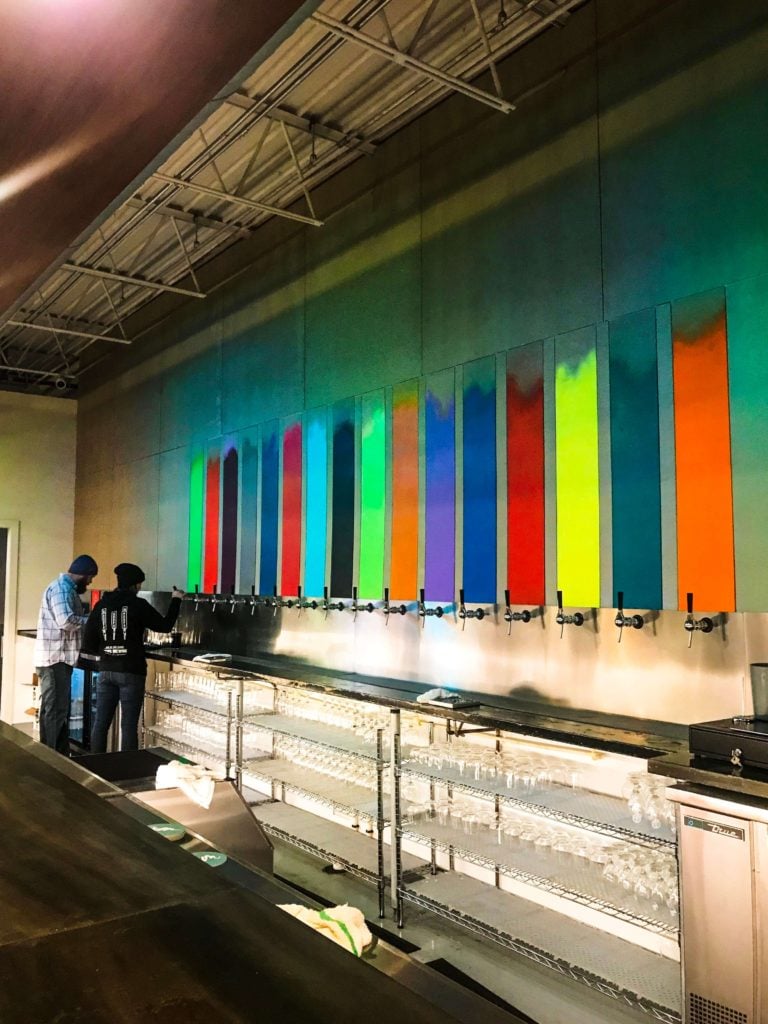 Each of their beers are artisanal. I love that because there is something to be said about a quality brewed beer. If you have a couple of them, you end up feeling a bit better in the morning…

Located in South Minneapolis, Wild Minds has an epic brewery with great design and local bands playing on weekends. The setup is great from a TV perspective as well if you are a sports fan. They feature a 10-foot projector screen showing all the best sports action.

Are you an IPA or hazy IPA fan? Wild Minds is your place. They feature some of the best eclectic collections of India pale ales out there. 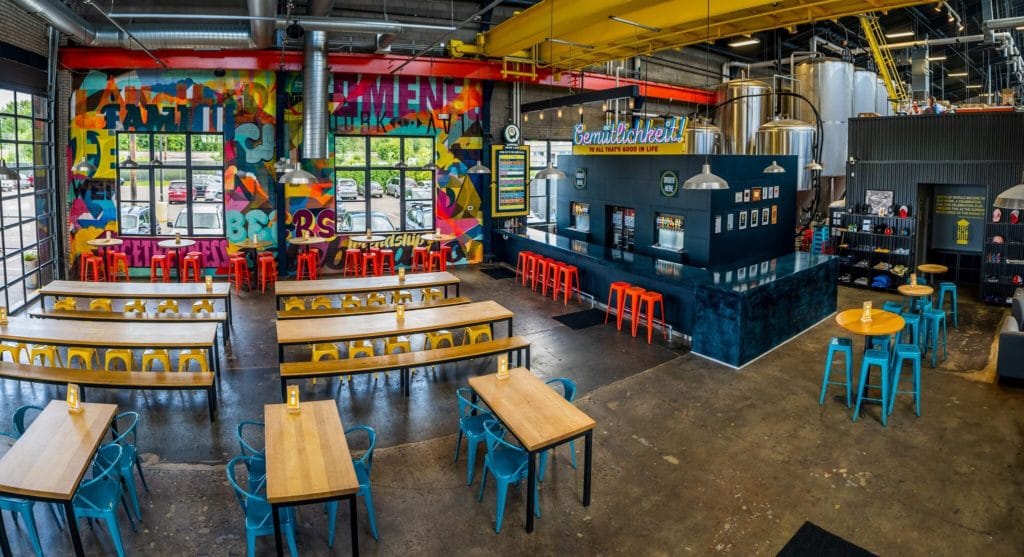 Bauhaus is a great concept as a brewery. The design in this taproom is eclectic and electric at the same time. It’s an old warehouse hangar with an open concept vibe.

I like the blend between craft brewery and German brewery. You will see German-inspired themes throughout. They feature an epic Oktoberfest every year that is worth attending if you are in town during the event timing. Bauhaus can be grouped with Indeed, Able and a few other craft breweries as some of the best breweries in all of Northeast Minneapolis.

Good news! They are all located within 2 blocks of each other. Drink away! 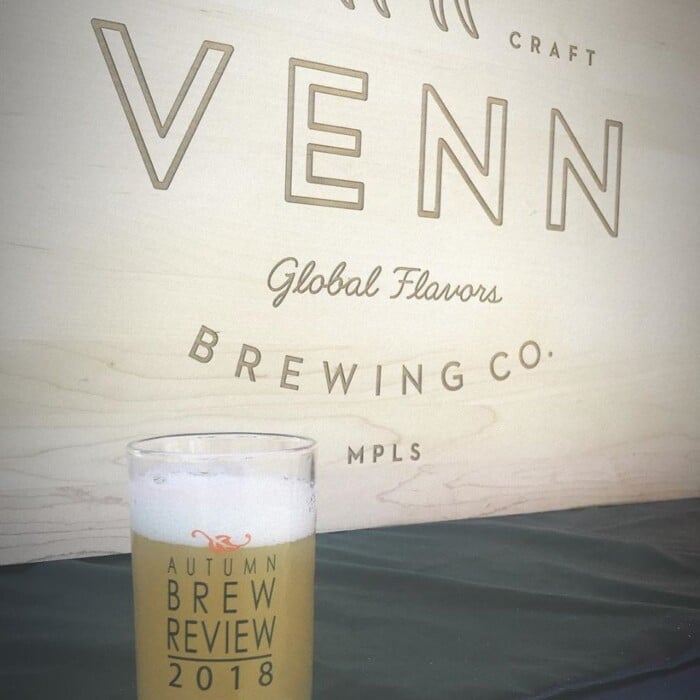 Venn has an amazing concept that differs from all the other mentioned breweries. Venn has different beers made in variety each time.

The taproom is conveniently located along the blue line light rail on the 46th street station. It makes for great pop off and pop on stop on your way from the airport or to games at Target Field or US Bank Stadium.

Their concept is pretty unique. Venn is Norwegian for a friend. Their logo is a fox to symbolize a communal friend. In addition, you never know what beer they will brew next. You can expect a cast of rotating features brewed until it’s gone.

Ven Brewing is another brewery that you can’t get in stores, so go to the brewery and enjoy fresh, cold craft beer.

Beers of Choice: It depends! You never know what you are going to get there. They specialize in awesome double IPAs and more. 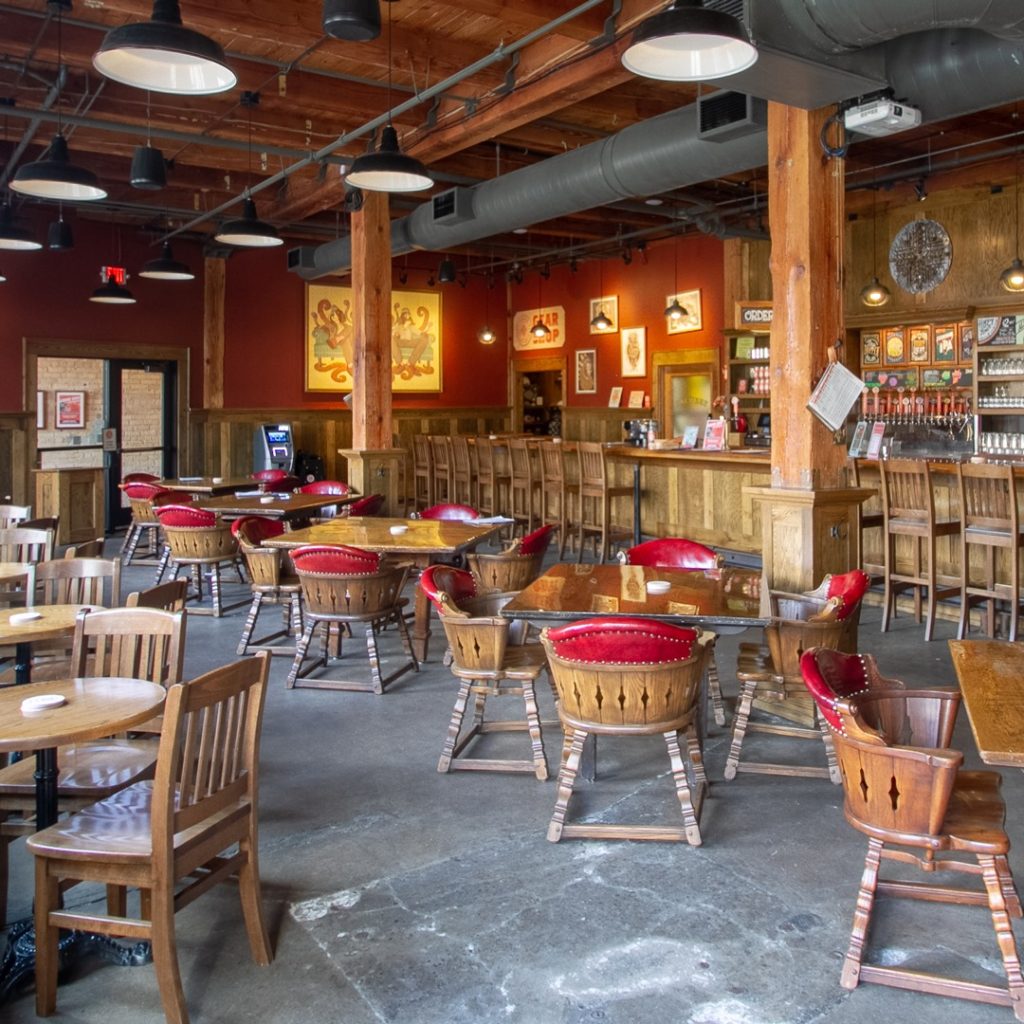 Indeed is a cozy, quaint taproom featuring some of the best beers in the state of Minnesota. Like some of their peers, Indeed was a trendsetter for craft brewing in the Twin Cities. You really can’t go wrong with any of their beer options.

Take a look at the wood plus exposed brick. It’s a great place to spend a cold winter or fall afternoon. 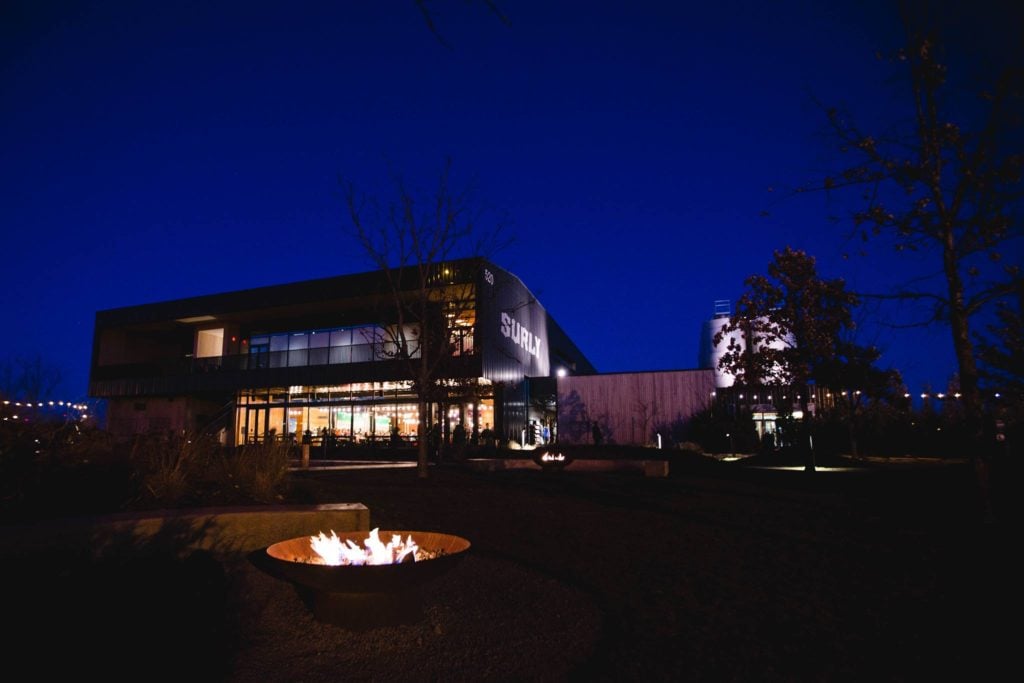 Surly is the OG. The original craft brewer of Minneapolis. Surly really opened the door for what we know as the craft beer market in Minneapolis today.

They’ve faced some stark competition over the years with a number of the aforementioned breweries entering the fold.

Many of their head brewmasters have formed at other locations, but that’s okay. They’ve continued to reinvent the wheel. I love going to the actual taproom to get some of the rarest beers on tap that you can’t really find in stores.

Be prepared. Their brewery is one of the busiest and biggest options in all of Minnesota. You’ll likely need to find a parking spot and come prepared. 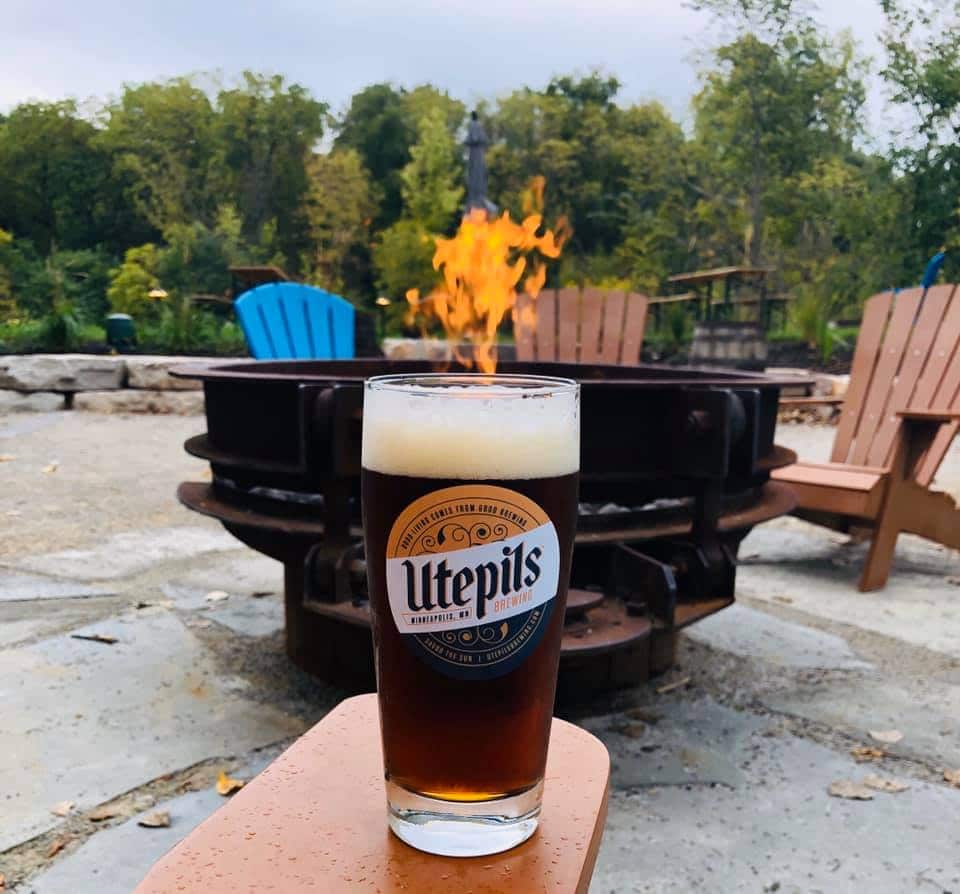 Utepils is located on the west side of Minneapolis near Golden Valley. I’m a European fanatic for beer and that is the core of their focus.

You can go to Utepils to get a differentiated approach on brewing and get away from the constant approach of IPAs, pale ales and more. Their altbier is one of the best that I’ve ever had.

Beyond that, I continue to reinforce the refreshed approach to craft beer. You can find crisp European lagers and ales at Utepils. I’d suggest that you stop along the way during your craft beer journey in Minneapolis. Their brewery is large, spacious and offers a great atmosphere.

I can’t say enough about their beers. You can go up and down the list of fresh, quality tasting European beer that makes you feel like you are in Germany or Czechia. Not many craft breweries can say that. 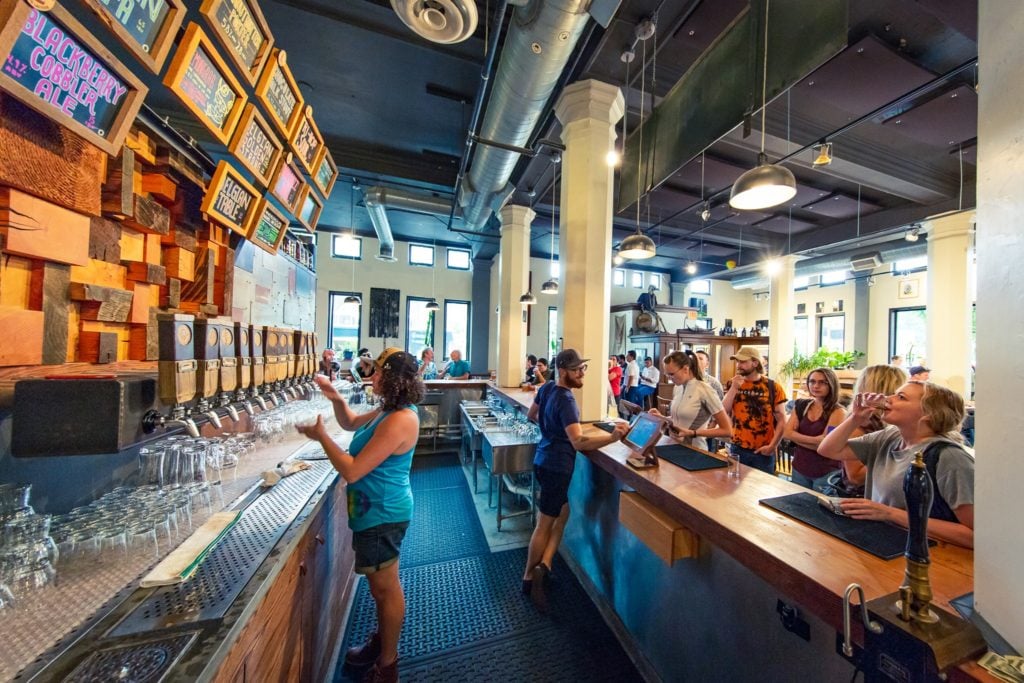 Dangerous Man is an absolute gem. This place gets very busy on weekends but in a good way. There is always a lively atmosphere. The taproom is filled with fresh floral greens that make it feel cozy no matter the season.

It’s a great spot to cozy up to when in the winter when you want to play board games and stay away from the winter cold. The peanut butter porter is one of the better beers in all of the state of Minnesota.

Pair up your brewery crawl with these amazing Saint Paul breweries.

Conclusion on the Top Breweries in Minneapolis

There are plenty of breweries to choose from in Minneapolis, but the above should be at the top of your list if you have limited time.

There’s a reason why Minneapolis is one of the best cities for beer lovers in the US.

These are the trues gems offering amazing beer, great design and fun events.

Book your tour here at Get Your Guide for the best experience!

No matter the type of beer that you like there is an option for you to consider whether that be hoppy, lager, crisp beer or stouts. The options are endless.

If you are short on time and want to create a mini brewery crawl, I’d suggest that you hit all the best breweries in Northeast Minneapolis, which would include the following names:

Now go drink some beer! Try to see all these locations with a 3-hour craft brewery tour in Minneapolis.

Spending more time in Minnesota? Check out these top Duluth breweries to explore in the “Land of 10,000 Beers.”

Kyle is Co-Founder and Editor of via travelers. He is an expert travel hacker that has traveled the world for less than $5,000 of total out of pocket costs. Kyle is a bit of a money and a digital nerd. Follow along with his posts to learn the most about travel itineraries, hacks and the secrets to travel the world.